How To Generate An Unstoppable High Kick

When perfecting an unstoppable high kick participants must first think of the muscles involved in executing and succeeding in performing this unstoppable high kick. When trying to decipher which muscles are used during the kick, athletes must ask themselves how do I kick, what muscles am I using, and what motions are being performed during the kick.

Once athletes and coaches have identified that glutes workouts, hip flexor strengthening, and abdominal exercises are the keys to learning how to kick with power, then athletes and coaches can begin to tailor their workouts toward enhancing those athletic skill sets and attributes in athletes.

How To Kick With Power

A great glutes workout will allow athletes to increase their ability to perform explosive movements in both a linear (forward and backward) and rotational planes of motion. However, kicking bags all day will only allow athletes to build up to a certain level of strength, speed and power, in their legs and other contributing muscle groups.

The key to generating an unstoppable high kick and enhancing athletes’ ability to kick with power is by adding additional resistance to the muscles involved in the kick. Attaching Kbands Leg Resistance Bands just above the knees allows athletes to place resistance at a key point on the leg. Placement of the resistance at the bottom of the athletes’ quadricep forces the athletes’ glutes, hip flexors, thighs, and abs to work harder than they would during a normal kick.

Using Kbands Leg Resistance Bands during combat sports training will help athletes learn how to kick and punch with power by teaching athletes how to be stronger and more powerful during rotational movements. Combat sports participants use this rotational power much like a baseball player throwing or hitting a baseball. Creating an unstoppable high kick requires athletes to learn how to use and transfer energy from one part of the body to create a powerful movement with another part of the body. 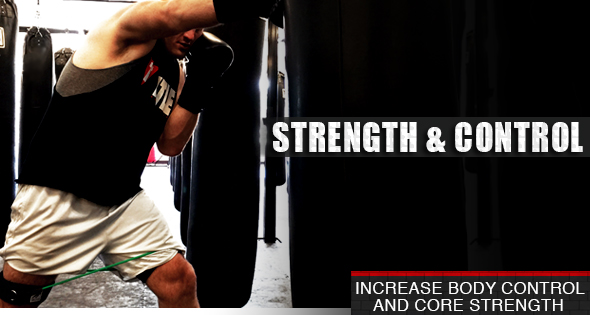 How To Kick With Kbands

When athletes are learning how to kick and how to generate an unstoppable high kick they must not only work on the speed and power of the strike, but must also concentrate on the placement of the strike. If athletes learn how to kick to only one spot they will have limited their offensive arsenal during a real competition. Athletes need to be able to instantaneously strike a wide range of targets on their opponents including the legs, torso, and head. Using the Kbands Leg Resistance Bands during the Triple Threat Kick Combo will not only teach athletes how to kick with power, but will give them a wider range of locations on their opponents body they can strike at any given point.

To perform the Triple Threat Kick Combo athletes will need a set of Kbands Leg Resistance Bands and a long, heavy bag that goes all the way to the ground or is just off the ground. Athletes will begin the Triple Threat Kicking Combo by attaching the Kbands Leg Resistance Bands just above their knees and standing just to the side of their bag. Athletes will begin the kicking drill by performing a low kick on the bag. This initial kick should strike the bag so the athletes’ foot stays below their hips. The second resisted kick will require the athlete to strike the bag at, or just above, their hips. The final kick should simulate an athlete making contact with their opponents’ head requiring a very high kick for the athlete.

Athletes will perform all three kicks (low, medium, high) before switching legs and performing the same 3 resisted kicks with their opposite leg. This will allow athletes to learn how to kick with more power with their non-dominant leg. Athletes should always try to begin the Triple Threat Kick Combo with the athletes’ non-dominant leg. This will allow athletes to have more energy when learning how to kick with their non-dominant leg. Athletes’ should perform kicks with both legs before stopping and resting for 25-30 seconds. Athletes will perform 4-5 resisted rounds of the Triple Threat Kick Combo on each leg before removing the Kbands Leg Resistance Bands and performing 1-2 unresisted rounds of the kicking drill with each leg.

As athletes go through their resisted sets of the Triple Threat Kick Combo they need to focus on using good kicking form despite the resistance placed on their legs. Learning how to kick with added power requires athletes to use good form so other parts of the body can be in a good position to add extra power to an unstoppable high kick. The resistance provided by the Kbands Leg Resistance Bands is to allow athletes muscles to grow stronger by placing greater tension on them during regular or familiar movements. Athletes who are able to maintain good kicking form will further increase the activation of these muscles helping these athletes to see greater results and benefits. Athletes should also focus on kicking faster during unresisted sets. Athletes will also learn how to kick higher when the resistance is removed since the muscles responsible for elevating the leg will have greater activation due to the use of the Kbands Leg Resistance Bands.

Sports specific drills are great tools for athletes to use when learning how to kick, and how to generate an unstoppable high kick. However, athletes can also use strength training and flexibility exercises to further develop their kicking and striking ability.

Glutes workouts like the Bridge Balancer Leg Exercise or the Strength and Conditioning Box Jump will help to isolate and build strength in the glutes. Strength and mobility in the abdominal muscles is another key component when learning how to kick with power. Drills like the Max Cardio Turns, Elevated Pike Push Up, or Stability Chop will help athletes build the strength and power in their abs to generate the power behind their unstoppable high kicks.