‏Effects of speed training, particularly high speed training, on the nervous system have to do with the speed at which the mind is able to tell the muscles of the desired limb to move. If the mind can quickly tell a strong portion of the body to move quickly then greater power and explosiveness will be experienced by the athlete.

‏The cardiovascular system is trained to intake larger amounts of oxygen during high speed training. This higher oxygen intake will help the body utilize more fat as a fuel source, expel unwanted material from the body (used during the utilization of carbohydrates as a fuel source), and help to increase the duration and intensity of high speed training and high intensity bouts of exercise.

‏The effects of speed training on these three areas of the body is a main contributor for the necessity of high speed training during individual and team training sessions.

How Do Parachutes Work To Increase Speed

‏This unique form of resistance and the effects of speed training drills which incorporate the Top End Speed Running Parachute lets athletes push the limits of their high speed training while making the speed drills individually challenging for each athlete. 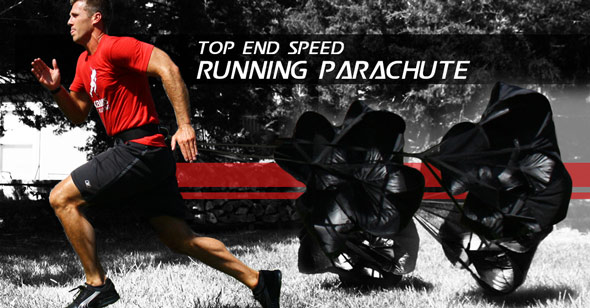 ‏To begin the Kbands Ladder Chute Drill athletes will begin at the end of the Speed and Agility Ladder, opposite the side with the Speed and Agility Cone, hold one or both parachuted in one of their hands and perform any number of Speed and Agility Ladder Exercises. Athletes can choose between high speed training adder exercises like the Icky Shuffle, Lateral High Knees, or any number or ladder drills. Athletes can go to the Training Section to learn about different speed ladder exercises which can be performed with the Kbands Ladder Chute Drill.

‏As athletes move through the speed ladder and resisted sprinting portion of the high speed training drill it is important athletes and coaches are focusing on maintaining proper running form. Working off the balls of the feet, working through the dig phase with a low chest, and performing quick and powerful leg movements will all help the athlete turn this high speed training drill into increase sprinting speed during competition or games.

‏Athletes who wish to move into the advanced stages of the Kbands Ladder Chute Drill can also add Kbands Leg Resistance Bands to this high speed training drill. Implementation of the Kbands Leg Resistance Bands into the high speed training drill will help to recruit more muscle activation in the thighs and hip flexors making for quicker and more powerful movements with the legs.