What separates good basketball players from great ones is consistency, especially late in the game? There are no iconic images of a player elevating a jump-shot over the defense in the first half of a game. However, the picture of Jordan faking a drive and then pulling up for a towering jumper to finish with a win in the playoffs is on posters everywhere. To develop a consistent shot late in the game leg strength is of utmost importance. Try the Jab Step Shooting Drill to see that jump shot during the final minutes fall.

The setup for this drill is super easy. The only equipment you need is a basketball, a hoop, and a set of Kbands. Position yourself along the 3-point line to build court awareness as this is one of the most likely places to be doing the jab-step jumper in a game. Have the Kbands attached above the knee with both bands in place, this will ensure hip flexor activation on every jab-step. Jab 6-8 times with the right foot using quick feet (no slacking here, this is where your late-game is built), then crossover/drop-step to the right one last time and take a jump-shot. Make sure to maintain balance in the air and land squarely. The Kbands will force a bit more attention on the landing, and this attention will help reduce the likelihood of injury during all future jump-shots.

Now switch to the left foot. Use the same 6-8 Jabs then take the crossover/drop-step shot. Remember the shot going in is not the focus of this drill. Shooting is an entirely different skill that needs it’s own development. This drill is focused on developing leg strength which will make the jump-shot more consistent especially as the body fatigues. The shot at the end of each rep of the drill is to build the mechanics of a jab-step, drive, then shot. 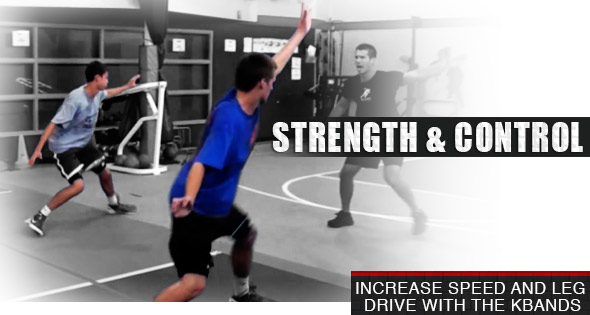 We’ve mentioned the late-game factor many times so far as it pertains to leg strength, so what does that really look like? Leg strength offers a couple of key advantages: elevation over defense, reliable mechanics, distance for the shots outside the 3-point line.

Elevation over the Defense

This one is a no-brainer. The stronger the leg muscles the more powerful the jump - good mechanics being equal. This means the jump-shot provides a clear vision of the basket over the defense, as well as a clear shooting lane over the defender’s arms. The more effort put into strengthening the legs and building endurance (doing the jab-step drill more than is comfortable) the more dramatic the difference will be between your jump shot at the end of the game and the defender’s ability to maintain quality defense.

We often hear coaches telling their players to stop forcing it. Sometimes this is in regards to taking a shot when not open, other times the coach is recognizing a lack in quality mechanics. A good jump-shot builds from the floor and extends through the fingers to the shot. This will be fluid and smooth. When the leg muscles fatigue the smoothness disappears because the arms have to take over to provide the power for distance shooting. This will appear clunky and “muscled”. The Jab-Step Shooting Drill will strengthen the legs and help maintain those mechanics further into the game making you the player that has the clutch jumper the team can count on in the final seconds.

Plant your feet on the ground and shoot from near the basket - step back and do it again. Continue stepping back and shooting, but without using the legs further and further back until you lose quality mechanics on your shot. Now you’ve found the range that your arms can give. Likely you’re well within the 3-point line. This means that for every shot beyond this range your legs are required to some degree. Stronger legs with more endurance will provide a deeper range for your shot and have the defense stretching to cover the 3-pointer that others might not even consider taking. By increasing leg strength you expand your shooting range, making you even more lethal late in the game.

One bonus point to consider is the other way to pull down 3 points for the team - an inside jumper with a foul. Without strong legs a player cannot power through the foul and earn the 2-point shot. Without the basket dropping all the player can hope for is 2 points from the free-throw line. Stronger legs force the defense to cover a player honestly. If every time a player gets fouled on the jump-shot they get 3 points instead of 2, tight defense becomes a liability.

It really is no question that stronger legs makes a better basketball player. For every reason given above for how strong legs makes a better offensive player, the exact same reason could be given for how they would make a better defensive player. Bottom line is: if you want to improve your game, strengthen your legs. For more drills and equipment designed for the mobile athlete browse around kbandstraining.com. We have an entire section devoted to basketball as well as specific exercise made for leg strengthening and endurance building.