Basketball players who are working to elevate their performance against zone or man-to-man defense need to develop skill in two areas: Shooting accuracy and general agility. Agility, or speed and strength during sudden direction changes, comes from the hips and core. So to develop the muscle condition necessary for sudden stops, starts, and close maneuvering, players can attach the Kbands and execute drills like this one. This baseline shooter drill also helps basketball players work on form and technique during baseline shots and jump shots, both of which are vital for scoring while in the zone.

The baseline shooter drill seems very simple in set up and execution, but it can have a powerful impact on speed, scoring, and control of the game in the three point zone. This drill can work for both advanced adult players and youth basketball teams looking for drills that can help them develop fundamental skills. Players and coaches can follow along with Trevor Theismann of Kbands training and watch the video closely for examples of footwork and shooting technique.

Setting Up the Drill In addition to a court and a ball, this drill requires a set of five speed and agility cones and a set of Kbands resistance training bands for each player. The cones should be placed in a line about three or four yards apart along the strip of paint at the edge of the scoring zone. The cone at the very center of the line can be moved out of alignment and toward the center of the court by a yard or two. This can help players develop the dynamic footwork required to get open, and it can also allow players to work at a flash toward the top of the key in order to simulate game-like situations.

For more advanced players, the cones can be widely spaced and the line can reach all the way to the edges of the three point zone. For younger players and beginners, the line can be shorted by a bit in order to make successful scoring a little easier. For all players, the first few rounds of the drill will require the Kbands, so while coaches are arranging the cones, players can warm up and attach the bands around their upper legs. 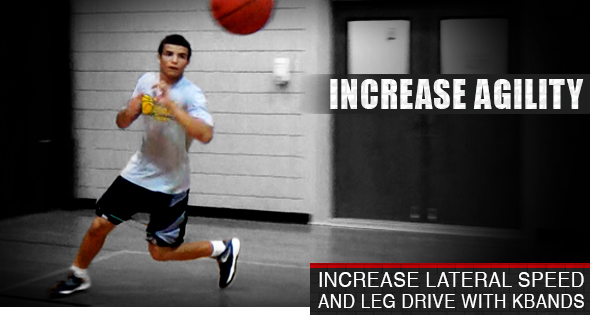 Executing the Drill Players will begin the drill at one end of the line of cones. When the starting signal is given, players will begin weaving through the line using a stutter step that will help them stay in control as they navigate a simulated line of defenders.

As players move through the line and then stop at the opposite end to receive the pass and take a baseline shot, they should keep their shoulders angled toward the top side of the paint in order to show the defenders that they may be flashing. After the baseline shot, players will weave back through the cones, again executing a fast stutter step. As they return to the starting cone, players will stop, receive a second pass, and line up the shoulders for a jump shot toward the net.

This basketball shooting drill should be continuous. As players run back and forth down the baseline, through the manned defense, flashing at each side of the ball wherever the ball may be, they’ll gain the maximum benefit from the drill by staying in constant motion. Fast footwork, powerful agility, heightened attention and sharp reflexes all come from an effort to stay in fluid motion from one side of the zone to the other.

Players should take at least ten shots, moving back and forth, with quick feet in the center of the line and a smooth, well executed jump shot at the end.

As players move down the line, weaving in and out of the cones in a simulation of defensive traffic, the Kbands will be applying steady resistance to the motion of the hips and core. As players work against this resistance, the bands will help them develop speed on the straightaways, lateral quickness, and fast acceleration from a standing position. Weak hips tend to lead to a slide at the end of the line of cones followed by a slight hesitation as the player begins to move back down the line. But as the hips gain strength, both the slide and the tendency to hesitate begin to recede. The resistance of the Kbands and full commitment to speed and accurate footwork during the drill will improve both speed, both front-to-back and side-to-side.

Players will move through eight to ten sets of the drill with the Kbands in place, with a slight change in the final few sets: as players move through the cones to the center, they’ll step forward, receive a chest pass from the coach, return it, then complete the line. This slight change will push players to stop, refocus, and then begin moving again at high speed.

During the entire eight to ten resisted sets, players should focus on basketball fundamentals affecting both speed and shooting accuracy. The body should stay aligned, the eyes should take in the whole game, and the upper body and shoulders should stay well positioned over the center. After eight to ten sets, the bands should come off and players should complete two more rounds with no resistance. During the un-resisted rounds, the body will feel unnaturally light, so players will need to work hard to keep the height and balance in the jump shot.

For more basketball speed and agility drills like this one, and more information about the resistance and suspension training equipment that can help take your game to the next level, visit Kbands Training.com. In addition to product information, the site offers conditioning and skill-based drills for players and coaches across a wide range of sports, including baseball, football, cheer, track, and lacrosse.