As basketball players on the offense approach the net in order to receive a pass and take a shot, they have more to worry about than just making the shot. Navigating defensive traffic, communicating with teammates, and attaining an open position in order to receive the pass are all critical parts of this equation. And in order to handle each of these tasks effectively, basketball players need to develop powerful coordination and agility. This starts with footwork, and it also includes a high level of strength and coordination in the hip flexors, glutes, and core.

The dynamic shooter drill in this video can support strength and growth in all of these areas, and in the meantime, this drill can help players gain control over the sudden stops and direction changes that often lead to knee injuries on the basketball court. The more players practice the take-off and landing surrounding the shooting process, the more control they’ll have over their knee rotation and the better protected they’ll be from ACL tears.

Players and coaches can follow along with Trevor Theismann from Kbands Training as he walks viewers through the steps of this basketball offense drill sequence, and then they can work this drill into their regular training program.

This drill requires only a net and ball, a speed ladder, agility cones, and a set of Kbands leg resistance bands for each player. The agility ladder can be laid flat on the floor perpendicular to the backboard and just outside of the lane. This distance from the lane will mimic the feeling of defensive traffic on the court as players move down the ladder in the role of a guard coming in to retrieve a rebound and take a shot. The cone can be placed about eight yards away beside the ladder. Once each player has warmed up and attached the Kbands to the straps around the upper legs, the drill can begin.

This set of basketball shooting drills will take place in several formats, but the fundamental portion of the drill remains the same in each version: the player will move down the agility ladder toward the net in any number of footwork patterns, then he’ll retrieve the rebound pass. Then he’ll take the shot and repeat the drill from the start.

As the players move down the agility ladder, they can use a variety of step sequences. The following sequences are demonstrated in the video, but players and coaches can feel free to add more or alter the sequences as they choose.

1. The single step through: This is the simplest footwork pattern. In this version, players simply run down the rungs of the ladder placing a foot between each rung. In order to get the most out of this pattern, players should keep the knees high at each step and work against the resistance of the Kbands.

2. The icky shuffle: In this pattern, players begin on the right side of the ladder, and place the left foot inside the first rung, then the right. When the left foot lands on the left side of the ladder, the right foot will come down inside the second rung, followed by the left, and so on. This drill should be executed at high speed and with total control over the position of the feet.

3. The wide hop: In this drill, the feet stay wide and move in and out of the ladder at the same time. Players will start on the right side of the ladder, hop in, hop out on the left side, and so on, down each of the rungs.

4. The one-two combo: In this version, the feet will remain inside the rungs all the way down the ladder, and the player will hop on one foot twice between each rung, alternating feet as he moves toward the net.

As the player leaves the ladder at the end of each footwork sequence, he opens himself to a rebound delivered by a partner or coach. The player should jump into the air as high as possible to receive the ball. Then he should deliver the outlet pass and sprint toward the cone to accept the ball and line up the shot. 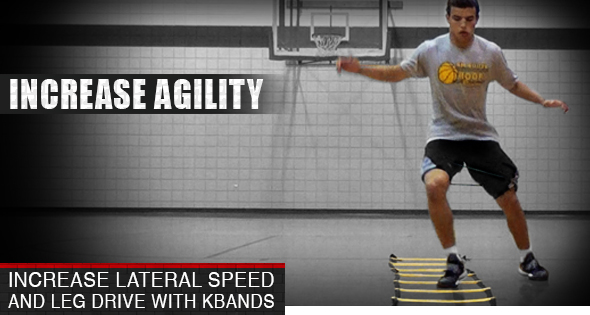 Basketball Shooting Drills: Technique, Pointers, and Benefits of the Drill

In addition to improving agility in the lane and shooting accuracy, this drill will help players build endurance in the legs and hip flexors as they work against the resistance of the Kbands. Strength and conditioning the hips, legs and core are essential to strong offensive and defensive game. And as players generate power and endurance in this area, they’ll feel lighter on their feet and more in control during passing and shooting maneuvers.

This drill also generates control over the vertical jump and the landing. As players jump to receive the rebound, they should gain as much vertical height as possible, and they should also focus on keeping the legs positioned directly under the hips as they land. ACL injuries are usually caused by sudden pressure or impact on a knee that’s turned inward, and this inward slant often takes place during a poorly controlled landing. Players should use each rep of this shooting drill to stay straight and centered on the landing and take-off.

This drill should be repeated by each player eight to ten times with the bands in place around the upper legs. Then the bands can be removed and players can move through the drill two more times with no resistance. At each rep, both resisted and un-resisted, players should bring everything they have to the ladder portion, the vertical jump, the landing, and the shot.

For more basketball offensive drills like this one, and more information about the benefits of Kbands resistance training equipment, players and coaches can visit the basketball training section of KbandsTraining.com.