Videos can be a great visual aid to pair with fitness articles describing a tennis drill when learning how to play tennis. An individual may read how they are supposed to rotate their hips and shoulders for a backhand or forehand tennis shot. However, seeing the movement performed correctly can help athletes better understand the movements of their body. The timing of particular movements in tennis videos can also be tricky to capture in a written article, but can be focused on and studied when watching training tennis videos.

Fundamentals Of The Tennis Backhand Shot

When learning how to play tennis there are four main shots athletes need to learn to execute: the overhead smash, the volley, forehand, and backhand tennis shots. Perfecting all four of these tennis shots will ensure a competitive tennis game for athletes.

When executing the backhand tennis shot athletes can use several different hand positions and follow throughs based on what is most comfortable for the athlete. The most important thing athletes need to remember on the backhand tennis shot is to hustle to where the tennis ball is going to be, rotating the hips so they are looking down the baseline, grasping the racket with both hands, getting great hip rotation and follow through as athletes swing at the tennis ball. Once athletes make contact with the tennis ball it is important that they are already thinking about their next shot, and are moving back into a position where they can reach a large portion of the tennis court.

Athletes should notice in the How to Play Tennis Videos the timing of the tennis player swing. They are not wild, flailing shots, but are instead compact, short, timed shots. Tennis players should wait until the tennis ball is in a great position to be hit, and then make a compact quick swing on the tennis ball. Athletes who load up and take wild uncontrolled shots will be limiting the chances the tennis ball is returned in good position away from their challenger. They are also limiting their chances of getting back into a good position to return the return volley from their opponent. 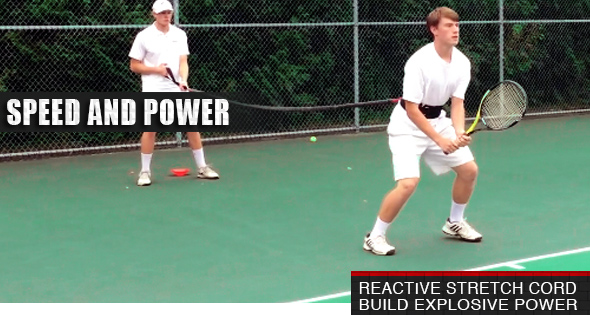 Athletes will begin the RSC Backhand Tennis Shot Drill by standing at the Speed and Agility Cone and will begin to return tennis balls over the net using only the backhand tennis shot. Athletes will quickly return to the center Speed and Agility Cone after each shot to mimic the tempo and requirements of a tennis match. When learning how to play tennis it is important athletes not only focus on the tennis shot, but also focus on their body movements and positioning before and after the tennis shot is completed. Partners servicing the tennis balls during the RSC Backhand Tennis Shot Drill should challenge athletes with the speed, tempo, and location of the tennis balls.

Learn How To Play Tennis With Resistance

The Reactive Stretch Cord is used as a form of outside stimuli and adds resistance to the tennis player as they move back and forth during the RSC Backhand Tennis Shot Drill. This type of resistance forces athletes to work harder as they extend the length of the Reactive Stretch Cord, while forcing great balance and body control as they work their way back to the center of the tennis court. When learning how to play tennis athletes should also perform tennis drills with other forms of resistance like the Kbands Leg Resistance Bands or the Victory Ropes. Both of these resistance systems will challenge athletes in different ways and help them develop lateral and linear speed and quickness.