Once athletes have properly placed the Speed and Agility Cone and attached the Kbands Leg Resistance Bands they will begin the Kbands Top Speed Tennis Drill. For this particular Top Speed Tennis Drill athletes will only be performing a forehand hit as they move to their dominant side. Tennis coaches or partner serving the tennis balls to the athletes performing the Top Speed Tennis Drill should be aware of this and keep the placement of the served tennis balls at a challenging distance for the athletes. After tennis players have shuffled out and performed a forehand tennis shot back over the tennis net the tennis player will quickly shuffle back to the Speed and Agility Cone placed at the midline of the baseline. This shuffle back to center will mimic a match like scenario in which a tennis player has made a great tennis shot, then has quickly moved back to the center of the tennis court to be in position for the return from their opponent. 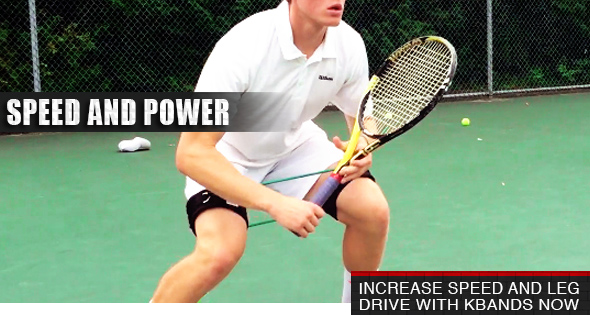 The Kbands Top Speed Tennis Drill is a great way for athletes to work on their court range and speed while incorporating a tennis specific movement, the forehand tennis shot. However, a well rounded tennis workout should included a wide variety of resisted, and unresisted, tennis exercises which also challenge and incorporate the backhand tennis shot, volleys, and overhead smashes. Using resisted tennis exercises with a multitude of tennis shots will allow tennis players to remain fast and mobile on the tennis court while being able to fluidly move into a wide variety of different tennis shots. Practicing these tennis exercises with different shots is a great way for a tennis player to effectively compete during a game. A quick and agile tennis player makes it difficult for an opponent to decide where to serve or return a tennis ball.