Successful offensive soccer maneuvers require powerful agility, which begins in the hip flexors and core and results in light-speed stops, starts, and direction changes. When offensive players can transition so fast that defenders can’t anticipate their actions, they stand a better chance of dominating the field and controlling the game. But in order to reach this level, offenders need to build strength and condition in the core, develop a powerful sense of balance, and practice fast direction changes over and over until they come naturally.

This video demonstrates a transitional shooting drill that takes players from a defensive stop into a shot on goal. Soccer shooting drills like these tend to move players through a complex series of maneuvers that help them develop sharp reflexes and fast feet. This drill will take place in front of the net on an indoor or outdoor soccer field and will require a few minutes of set-up and preparation in addition to regular warm-up and stretching moves.  The drill won’t take more than about 30 minutes and it can be worked into a standard training program a few times per week for strong results.

In addition to the goal, this drill will require a ball, a speed and agility ladder, and a large set of speed and agility cones. Each player will also need a pair of Kbands resistance training bands strapped around his or her upper legs for the first portion of the drill, in order to create the tension that leads to strength and condition in the hips, legs, and torso.

The speed and agility ladder will provide the first obstacle, and will be laid flat on the ground off to the side and perpendicular to the goal. Beside the ladder, four cones will be laid in a wide zig zag pattern about five to eight yards apart. The ball will be placed at the far end of the pattern, and beside the zig zag, the remaining seven or eight cones will be placed in a straight line a few yards apart so players can move down the line in a tight weaving pattern. For the first three reps of the drill, each player will have the Kbands straps attached around the upper legs and the resistance bands clipped to the straps. 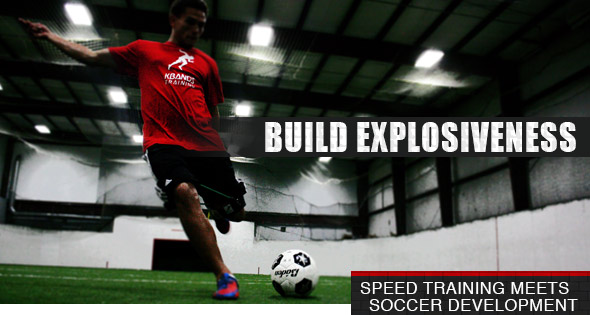 At the starting signal, each soccer player will approach the speed and agility ladder first, and will move down the ladder from the far end of the field toward the goal. Players can choose how to make the best use of the ladder phase of the drill; they can move down using a step-over, a lateral high knee run, a straightforward high knee, or the icky shuffle. The move can change with each rep, as long as the feet stay fast, the arms stay engaged, and the knees rise at every step and work against the resistance of the bands.

At the end of the ladder, in front of the goal, the soccer player will stop and change direction, moving backward through the wide zig zag cone formation from cone to cone. Players can execute this move while facing the goal, as if faking out the goalie, or they can move backward to the first two cones before turning and sprinting through the last two. The movement can be made in a slow shuffle, or it can involve a fast backward sprint with powerful drop steps. But no matter which approach a player chooses, the last cone should be followed by a drop step and light-speed sprint to the ball.

At far end of the zig zag pattern, the player will find the ball waiting, and will pick it up for the next phase of the drill. While passing the ball from foot to foot as if protecting it from defensive traffic, the player will maneuver in and out through the final line of cones.

While this final phase of the drill seems simple, the added resistance of the Kbands will provide an additional element of challenge, and players will need to work hard against the tension of the bands in order to maximize the benefits of the move.

The position of the chest will be vital to success in this phase. The natural tendency will be to lean back, but players should focus on keeping the chest forward over the toes in order to stay powerful, balanced, and under control. At the end of the final obstacle in this offensive drill, the player will pause, give the ball an extra touch, and then take a powerful shot on goal toward the back post.

The first three reps of the drill should take place with the resistance bands in place and the player moving from the left side of the goal to the right. Three more resisted reps should follow with the pattern of the obstacles revered so the player is moving from right to left. The passing, the drops steps and the shot on goal should all be equally executed with both the right and left feet. After six total resisted reps, players should complete two more from each side with the resistance bands unclipped from the straps.

During the unresisted portion of the drill, players will feel a noticeable increase in lightness and speed and they should use this feeling of speed to focus on control and fast footwork.

For additional offensive soccer shooting drills like this one as well as defensive and general conditioning drills, soccer players and coaches can visit the soccer training section of KbandsTraining.com. The site also offers detailed training drills for a wide range of other sports, including basketball, baseball, track and field, and lacrosse. KbandsTraining.com also provides purchasing information and details on the principles behind resistance and suspension training equipment like the Kbands, KB Powerbands and KB Duo. For answers to specific questions, leave a comment or contact the Kbands trainers directly.