During both offensive and defensive game situations, soccer players need to rely on quick direction changes on the field. And when these changes mean a shift from forward sprints to backpedals, they require a well-executed drop step. The soccer practice drill in this video takes players through a series of moves designed to generate faster stops with better control of the sprint, followed by drop steps that keep the body balanced and in a state of continuous motion into the backpedal.

These drills will also rely on the added tension of the Kbands, which will place resistance on the hip flexors and muscles of the lower torso. When these muscle groups are conditioned and trained to execute fast changes, players will feel a powerful sensation of lightness and agility after the bands are removed.

The Kbands drop step drill will require a set of resistance bands for each player, plus a bit of space on the field and a set of ten speed and agility cones, which are available for purchase at Kbands Training.com. To set up the field, coaches or players will place the cones on the ground in two parallel lines about four yards apart. The distance between the cones in each line will depend on the skill level of the player moving through the drill at any given moment. More advanced soccer players will need a little more space between the cones, and beginners will need less, but in all cases, the space should be enough for players to build up to explosive sprint speed before stopping and moving into the drop step.

Once the field and the cones are in place, players can focus on warming up and attaching the Kbands properly. This drill shouldn’t take more than 10 to 20 minutes, and if it’s worked into a regular seasonal training program, players should quickly start seeing agility and balance improvements on the field.

At the starting signal, the soccer player at the first cone will sprint explosively to the second cone in line, then stop, drop step back, and accelerate backwards to the first cone in the corresponding line. Without stopping, the player will change direction again, sprint toward the next cone in the first line, and drop step back again to the other line. All the way down the two lines of cones, the player will move forward and back, maintaining total control over body position and technique during the entire exercise. At the end of the line, the player will break away, take possession of the ball, and execute a pass after the turnover. The pass should be delivered through the two remaining cones. 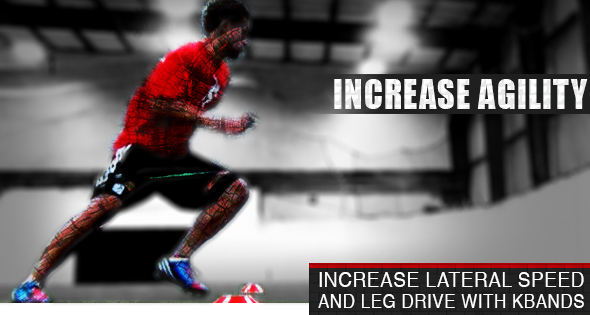 At each step between cones, athletes can envision themselves cutting off an offensive player, then stepping back into a simple jab. The proper mind set will play a key role in the success of this exercise; As they cut off an imagined offensive player, they should also picture pushing this opponent toward the sidelines. Athletes should concentrate on driving the offensive player over the line, backing up, then repeating the move all the way down the line of cones. As players move down the line, coaches can observe their body position and provide pointers on how to sharpen the attack and keep the hypothetical opponent on the edge of the field.

An effective approach to this drill will also take the resistance of the Kbands into account. The resistance bands will place an extra level of artificial tension on the hips and torso, and at each direction change and forward sprint, players should work against this resistance by maintaining full speed and strong drive in the legs.

At the same time, the bands should not control the intention of the drill—While driving against the resistance, players should stay balanced above their center of gravity and not allow the chest and upper body to move ahead of the motion or fall behind. In other words, players should stay fast, but under control. The chest should stay above and behind the toes at all times.

To get the most out of this soccer practice drill, players should make sure that both sides of the body are equally exposed to the both the forward and backward side of the motion down the line of cones. Complete three reps of the drill with the right side of the body in the lead, then reverse the direction or reset the cones and complete three starting with the left side.

After a total of six reps with the resistance bands in place, players can unclip the resistance bands from the straps and complete two more sets on each side with no resistance. During these final reps, the body will feel unusually light and the feet will feet light and fast. Athletes can take advantage of this temporary sensation to focus on speed and control.

While reviewing the site for practice drills, visitors can also learn more about the simple principles behind the Kbands resistance and suspension training equipment, including the Kbands, the KB Powerbands and the KB Duo. The videos and articles on the site can help users get the most out of these lightweight, portable training tools that can add depth and complexity to any workout or sport-specific practice drill.