Every team can benefit from soccer practice drills that allow players to line up directly in front of the goal and take one easy shot after another. But static, easy, unopposed shots at the goal can only take soccer players so far. To supplement and add value to regular passing and shooting practice, Athletes and coaches can use the video below to set up dynamic game-like situations that can help improve scoring and passing on the field. This drill is called the Situational Soccer Attack drill, and working these moves into a regular practice routine can help players think on their feet, improve their agility, and control the ball while in motion. The drill is broken down into three sections, with each one simulating situational passing and shooting from various angles and positions on the field.

This drill will require a few elements of equipment, including a set of speed and agility cones, a speed ladder, and a pair of Kbands resistance training bands for each player. For more information on how the Kbands build strength and quick reflexes in the core and hip flexors, visit Kbands Training.com. The site also provides purchasing information for the bands, the speed ladder, and the cones. In the meantime, players and coaches can review the video to understand each element of the drill and how it can help players stay in control of the game.

For the first phase of this drill, coaches can arrange three speed and agility cones in a straight line perpendicular to the goal and about eight yards apart. Players will work through these cones as described below, and then they’ll encounter the ladder which will be laid flat along the ground parallel to the goal. After the ladder, soccer players will face three short rows of three cones each, placed side by side.

As they navigate these obstacles, players will also need a ball, and they’ll need a pair of Kbands resistance training bands strapped their upper legs and clipped to a set of resistance bands. Once all of these elements are in place and players have stretched and warmed up, the drill can begin.

The first phase of this drill involves a backpedal, turn and sprint. Players can begin at the first cone and start backpedaling toward the second cone at the starting signal. As they reach and pass the second cone in the line, they’ll turn and sprint for the final cone, lifting the knees high and working against the resistance of the bands. Both forward and backward sprints are critical elements of speed and control in game situations, so coaches should make sure players get the most out this phase by keeping the knees high and the arms engaged. During the drop step and direction change, players should work to keep the center of gravity low and under control. At the end of the line of cones, players will arrive at the ball and will take a shot at the goal before moving on to the next phase of the drill.

During the second phase, soccer players will encounter the speed ladder and will race laterally from one end to the other, placing a foot between each rung. During this move, players should remember that slow arms equals slow legs, so the arms should stay bent at the elbow and in constant dynamic motion from beginning to end. As players reach the end of the ladder, they’ll reach the ball again (or a different ball), and they’ll have an opportunity to practice the cross-pass, or a shot across the field toward a waiting defender. Immediately after making the pass, players will move onto the final and last stage of the drill. 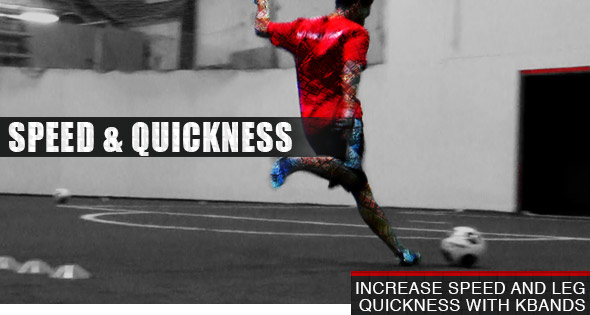 During the last phase of this drill, players will attack the three lines of speed and agility cones. Each athlete will leave the ladder and cross pass behind and sprint toward the first row of cones. After weaving from one side of the row to the other and then back again all the way down the line, the player will step away from the cones, approach the ball one last time, and take a shot toward the goal. As with each of the other two phases of the drill, the arms will need to stay active and elevated, and the footwork will need to stay fast and under control.

The center of balance will also be a key issue during this phase; players will need to stay aligned and centered, and work hard to avoid a jab step, or leak, or end of each line of cones. This will be especially challenging during the last portion of the drill when the resistance bands are removed, but the more centered the body stays, the faster the feet will become with multiple repetitions of the drill. After the player leaves the line of cones, the final shot should be strong, focused, and directed straight toward the target.

Each soccer player should complete six full resisted sets, three of them from the right side of the goal to the left, and three from left to right. After all six resisted reps are complete, players can unclip the resistance bands and complete two more reps, one from each side. Again, during the unresisted sets, center of balance will be harder to control, so players should place extra emphasis on this element of technique to get the most out of the exercise.

For more soccer shooting drills like this one, soccer practice drills, and soccer drills for kids, players and coaches can explore the soccer training section of Kbands Training. com. More videos appear in the site’s training sections every week, and each drill offers fundamentals and pointers that can help players elevate their game at every skill level. The site also offers plenty of additional detail about the benefits of the Kbands, KB Duo and KB Powerbands.