A balanced soccer training program will place a heavy emphasis on speed and agility, but sprint speed and lateral soccer speed are not exactly the same. Speed in a lateral direction will require different reflexes and will engage different muscles groups than sprints or soccer practice drills that focus on the backpedal.

In competitive soccer, side to side quickness can mean the difference between winning and losing, and this skill is not inherent; it can be developed with a strong training program. Great soccer training and the right soccer practice drills can help generate lateral quickness even in young players and new beginners, so coaches and players should make sure this skill is built into every daily or weekly training session.

As coaches take players through a series of lateral soccer speed drills, the added resistance of the Kbands can play a powerful role in the development of muscle strength and coordination. The bands are designed to place pressure on the hip flexors, which are the muscles that contribute the most to lateral soccer speed. So when the bands are in place, soccer practice drills become far more difficult and speed and muscle development takes place on an accelerated schedule.

In the video below, the Kbands trainers demonstrate a lateral soccer speed drill that can cultivate quickness and agility for both beginner and advanced soccer players at any age and any level. Both coaches and players can observe the video and then work this speed drill into their own soccer training program.

To prepare for this simple but intense set of soccer practice drills, soccer players and coaches will need a ball, two training cones, and a set of Kbands for the player who will be running the drill.

These soccer practice drills will require two participants, a player and a partner who play the role of the coach. While the coach lays down two training cones about five yards apart, the player will attach the Kband straps around his upper legs with the metal rings on the outside. Then the longer resistance band can be clipped to the front rings and the shorter band can be clipped to the rings in the back.

When both participants are ready, the player will stand between the two cones and the soccer training drill can begin.

The coach will begin the drill by taking a position about three yards in front of the player so the coach’s body and the two cones form a triangle. The coach can sit or kneel during the drill in order to keep the tosses low to the ground, and when ready, he’ll roll the ball toward the left cone. The player will begin the drill in a lowered stance, and when the ball is rolled, he’ll shuffle laterally toward the left cone and tap the ball back to the thrower with the left foot. The thrower will then toss or roll the ball to the right cone and the player will repeat the move with the right foot.

At each cone, the kicks should be quick taps, and the player’s feet should never click together when shuffling. The lateral power necessary for speed and agility development will only come from a stance that’s wide and controlled, which means one foot should be on the ground the entire time. High shuffling, or leaping into the air and taking both feet off the ground at the same time, will slow a player’s reaction times. But keeping the feet grounded and the center of gravity low will help players develop control and stability, which are very important for defense.

Each lateral speed soccer practice drill should continue for about 30 seconds without pause. Then players and coaches should stop and rest for a full minute to a minute and a half. These speed drills are intense, and the pressure of the Kbands will demand strength from the hip flexors, glutes and core. So players should be sure to take advantage of a full rest period between each set. Otherwise they run the risk of overtraining and slowing down. Players should make sure they give their all to each drill set and move with controlled explosivity through each set from beginning to end. 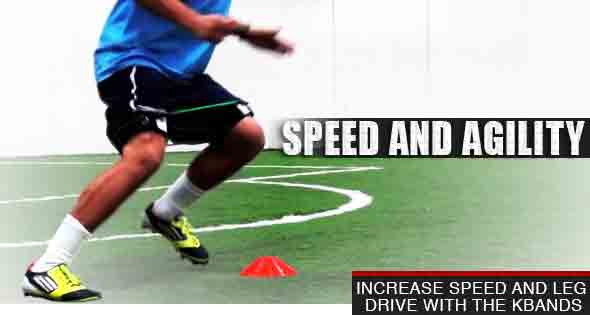 The lateral soccer training drill should be completed four to six times in a row with the Kbands in place and long rest periods between each set. After four to six resisted sets, the bands should be unclipped from the straps and the player should complete two more drills without resistance. Soccer players should recognize that moving from resisted to unresisted sets will create a neurological sensation of lightness that will last for several minutes. As long as this sensation lasts, players should take advantage of the feeling to focus on footwork and speed.

In the video, notice how the soccer player’s control and speed increase dramatically after the bands are removed. Since his legs feel free, he can keep his stance wide and move rapidly from side to side without fully leaving the ground or letting his feet touch. Notice how his defensive reflexes and his lateral quickness seem to come more naturally.

For more soccer practice drills like these, and for more information about the benefits of Kbands resistance training, visit KbandsTraining.com. The Kbands trainers are always available to answer questions coaches and players may have about the Kbands, the KB Powerbands and the KB Duo suspension training system. The site also offers sport-specific tips and techniques that can help coaches and players get the most out their training sessions for football, basketball, cheer, and track. Bring the targeted, scientific benefits of resistance training equipment into your practice sessions and watch your results improve.