On the soccer field, a strong defensive game demands powerful reflexes, quick turns, and drive in the hips, legs and core. Soccer defensive drills like the one demonstrated in the video below can help players add power to moves that demand hip rotation and speed. Since soccer speed drills like these target the muscle groups in the hip and upper leg, they become more effective and bring even faster results when players add the challenge of the Kbands resistance bands.

When attached to the upper leg just above the knee, the resistance bands place increased tension on the muscles that drive the knee and rotate the hips during defensive maneuvers. To get the most out of these soccer defensive drills, players can place the straps around the legs with the label facing forward and the metal rings on the outside. Then they can choose the appropriate level of resistance and clip the bands to the straps with the long band in front and the shorter band in the back.

To set up these soccer speed drills, players and coaches will also need a set of five orange agility cones. Four of the cones will be placed in a line about five to eight yards apart, with the fifth set five yards from the line as a starting point for the drill.

Follow along with the video below as the Kbands trainers demonstrate these soccer speed drills and walk viewers through the process.

These soccer defensive drills will begin with the player standing at the starting cone. When the signal is given, the player will run toward the first cone in the line of four. As soon as he reaches the first cone, he’ll drop his hip, rotate his body toward the second cone, and run in that direction.

When he reaches the second cone, the player changes direction and drops back toward the starting cone as if his opponent has made a move. After turning his hips and dropping back for a few steps, he reverses again and heads toward the third cone. He repeats the drop-back defensive maneuver again, then turns toward the fourth and last cone in the line. He sprints toward the final cone, executes a turn around it, and then grabs the ball and sprints into the straightaway.

As the player turns toward each cone, then drops back, his feet open up and his hips stay centered and under control. Then he drives his knees forward in an explosive move toward his destination.

Note that during these defensive drills, the player’s entire body is engaged in the move. His arms are in motion, his knees are high during the runs, and he keeps his eyes open and his attention on the movement of his hypothetical opponent. His hips lead the direction changes and as he follows through, his arms and core are fully engaged. He commits full to the entire drill and doesn’t hold back until he’s grabbed the ball and made the final run.

This drill should be completed with the resistance bands in place for a total of 6 to 8 reps. During the resisted sets, players will get the most out of this drill if they drive the hips and knees against the resistance of the bands without letting up. Full commitment will not only help build hip strength and coordination, but will also enhance the neurological sensation of lightness that will take over the body for a little while after the bands are removed.

The first six to eight resisted sets should be followed immediately by two to four unresisted sets. After the final run with the bands in place, players should unclip the bands from the straps and get them out of the way. Then, without a long rest break, the player should start at the first cone and complete the same drills again for 2 to 4 reps.

The unresisted sets will feel very different in terms of explosivity and footwork. While the body is overtaken by the temporary sensation of lightness, players should focus fully on maintaining control over foot placement and defensive body position. Players should keep the feet moving, stay fast, open up the body on the turns, and respond quickly to changes in direction. 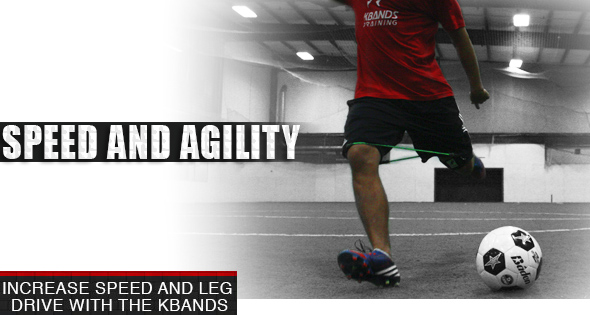 Players should always remember the central principle of this defensive drill: keeping the body between the opposing player and the goal. After the bands are removed, direction shifts and explosivity will be easier, and players will have to work hard to not get lazy, to maintain speed through the entire drill, and to keep defense in mind. Players will need to push through at maximum velocity, all the way around the final cone. Even as players grab the ball and move upfield, the feet should never slow down and the hips and knees should never rotate or drive forward at half capacity.

An effective defensive game demands strength, coordination and fast response times, and these aren’t the only drills that can build and sharpen a defensive strategy. Take a look at the training tab above for many more video workouts like this one that can help soccer players control the field. In addition to soccer drills and training materials, the Kbands site also provides drills and technical guidance for a wide range of sports including football, basketball, baseball, cheer, and track. Explore the resources on the site or reach out the Kbands trainers directly for more information.