All soccer players need a high level of agility and speed, and quick direction changes can help both offensive and defensive players take control of the game. But nothing controls the momentum of events on the field like fast footwork. Truly great soccer players may have different styles and different strengths, but they all have one thing in common: They all know how to maintain control over the ball while changing position, passing to an open attacker, or working their way out of the defensive zone.

This drill, called the Kbands soccer directional footwork drill, can help soccer players tighten their passing skills and increase their speed in any direction without losing control of the ball. This drill doesn’t require much equipment, but with proper attention to technique, a few reps of this exercise can be added to any training program with powerful results.

While soccer players are executing the footwork maneuvers that are part of this drill, they’ll also be gaining the strength and conditioning benefits of the Kbands, which will be adding resistance to the core and placing tension on the muscles of the hip flexors and upper legs. The bands can accelerate the development of lateral quickness and body control.

Before moving through each stage of this drill, soccer players can attach the straps of the Kbands to their upper legs and clip the resistance bands to the straps. Meanwhile, coaches can arrange a set of four speed and agility cones on the field in a large square. Each cone should be about eight to ten yards away from the next one. The cones will form the boundaries of an imaginary field and will allow players to maintain tight turns in and out of the corners and accelerate quickly out of each turn. The drill will also require a ball for each player.

The soccer directional footwork drill can be broken down into four components: The bob, the chop, the cut, and the Cryuff. 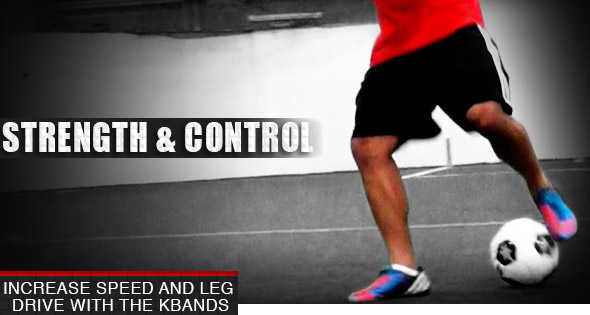 The Bob allows players to stop the ball during the point of attack, or move in the opposite direction of a defender. To execute this exercise, the player should travel with the ball, sending it out in front of the body, and then should quickly reverse the direction of motion. The player will stop the ball with one foot, and then pass it under the body, then turn and start moving in the opposite direction. Players should complete four resisted reps of this direction change before moving into the next phase of the drill, call the chop.

Soccer players should complete four resisted reps of this move starting with both the left and right leg. Then the bands can be unclipped and each player can start over from the beginning and execute four unresisted reps of the bob and chop for a freer, faster, and lighter feeling in the legs and feet.

The next move of this drill is called the cut, and to execute this move, players will imagine a defender running alongside of them. Just as the imaginary opponent makes a dive for the ball, the player will quickly reach for the ball with one foot, steer it to the outside of the line, and take it quickly away in a new direction.

The Cryuff will require a slightly higher level of footwork, skill and practice, but the goal will be the same: taking the ball in a new direction and making access and possession more difficult for an opposing player. In this move, the soccer player will change the momentum by planting a foot on the ball and passing it backward under the body. Balance is key to success with this move, and players may need to practice several times before they can stop the ball smoothly and redirect it without losing control. As soon as the ball moves under the body, the player will rotate quickly and drive the ball away in another direction.

These drills can be considered individual supersets, with players focusing their full attention on each step before moving on to the next one. Like the first two, the cut and the Cryuff should be completed in four resisted sets followed by two unresisted sets. During each set and rep, soccer players should invest fully in technique and form while not compromising speed. Coaches can help by carefully observing each player’s footwork during both the resisted unresisted reps of each move.

This drill is just one of a multi-dimensional series of soccer footwork drills available through the soccer training section of Kbands Training.com. Coaches and players can explore the section to access training videos that emphasize footwork, agility, passing skill, scoring technique, and all aspects of both offensive and defensive maneuvering. Most of the drills on the site require only simple sets of equipment, including speed and agility cones, speed and agility ladders, and the Kbands resistance training tools.

With just a few additional minutes added to each regular soccer training session, players can watch rapid, steady improvements take place in endurance, strength, and specific skill sets. The drills can be customized to meet the needs of players at any age and any skill level, and the Kbands training equipment can add level of additional resistance to core muscles groups that can lead to fast gains in strength and coordination. For more information, explore the site or contact the Kbands Training team directly.