The most effective soccer drills are those that emphasize the crucial balance between speed and control. Soccer is a beautiful game that blends the elements of both physical and mental agility, and when it comes to soccer juggling and soccer conditioning, the most highly skilled players are those who demonstrate the coordination and power that comes from the mind as well as the hip muscles, the core, and of course the legs.

Developing soccer speed and agility will give a player perfect control over both the body and the soccer ball. Great players execute light speed responses to unexpected changes on the field. They also shift quickly from fast forward motion to fast lateral motion and back again without losing balance or distributing power inefficiently. Soccer drills like the one in the video below can help players target the hip flexors, and can build strength and control in these muscles by engaging the entire body, including the arms. In addition to building soccer conditioning with rapid, controlled bursts of motion, these soccer drills will also use the additional resistance of the Kbands to train the reflexes and generate explosive power in the hips and core.

These soccer drills will include a forward run, left and right side drill, and a repetition of all three with the Kbands removed. Follow along as the Kbands trainers take athletes through the process with tips and instructions for each component of the drill.

Soccer Speed and Agility: Setting up the Soccer Conditioning Drill

To set up the soccer condition drill, players should lay a training ladder flat on the ground and position the first cone 4-5 yards away from the ladder’s end. Place the second cone at an angle five yards from the first, and the third five yards from the second, so the first three cones form a triangle. The fourth and fifth cone should continue the pattern, sending the runner in a zig-zag motion. After weaving through the first four cones, the runner should encounter a short line of cones arranged in the form of a hurdle, followed by another line of cones just a few feet away. Place one final cone at an angle five yards in front of the second hurdle, and on an angle five yards in front of that cone, place a soccer ball on the ground for the final move of the soccer drills.

The athlete running the course should strap the Kbands in place around the upper legs with the short resistance band clipped to the back of the straps and the longer band attached in front. When ready, the athlete should take a starting position at the far end of the extended ladder.

Soccer Speed and Agility: Set One of the Soccer Circuit

At the starting signal, the soccer player should run down the ladder, placing a foot between each rung. The knees should stay high, which means the player will need to work hard against the resistance of the bands at each step. The arms should also stay fully engaged in order to help the player stay balanced, agile, and fast.

At the end of the ladder, the soccer player should sprint to the first cone, circle the second, third and fourth at high speed in a direct line, and head for the first hurdle. He should clear both hurdles one after the other with the knees kept high and together, then he should circle the last cone, run for the ball and make an explosive shot to either the right or the left. This drill should be repeated twice. 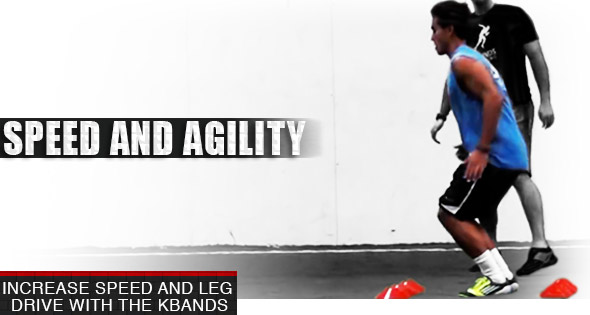 The third and fourth sets of the soccer conditioning drill should focus on lateral rather than forward motion. The athlete should begin at the head of the ladder with the chest lined up parallel with the ladder length, rather than perpendicular. When the signal is given, the player should run sideways down the rungs, keeping the arms bent and the knees high. Again, this will place tension on the legs if done properly, since the athlete will be working hard against the resistance of the bands.

When the he reaches the end of the ladder, the player will zig-zag through the cones again, but this time his chest will stay aimed in the same direction. This means a backward run to the first cone, then a forward sprint around the first and toward the second, etc. The final stage of the drill will repeat the same double tuck jump, last explosive dash, and shot of the soccer ball.

Athletes should complete the lateral soccer drills with the left side of the body leading the move, then start at the beginning and lead with the right side of the body. In order to develop balanced strength and coordination, both sides should be given equal attention.

When the final lateral move is complete, the soccer player should pause for a rest period of at least one full minute, and then should repeat the entire four round cycle with the Kbands unclipped. Removing the resistance of the bands will create a physical and neurological sensation of extreme lightness that will last for several minutes. Players should take advantage of this sensation to focus on quickness, footwork, and balance.

For additional soccer speed and agility tips, soccer drills, and videos like this one, coaches and players can visit the Kbands training website at KbandsTraining.com. The site offers not only specific soccer training guidance, but also purchasing resources and additional information about the principles behind the Kbands, the KB Powerbands, and the KB Duo suspension training system. Explore the site and learn more about how these lightweight and deceptively simple tools can build strength and agility on the soccer field and can take any team or player to the next level.