One of the most critical game situations for offensive players on the soccer field usually takes place as the player encounters a final line of defenders before taking a shot at the goal. The player controls the ball at this point, but a group of defenders still stands between the player and the goal, and the offensive athlete needs to find a way around the line and forward without passing the ball or losing possession.

There are several classic moves that skilled soccer players can call upon at this point. But in order to bring success, each of these options will require quick direction changes, powerful agility, hip strength, and coordinated footwork. All of these central skills benefit from relentless practice, and a drill like this one can provide that practice. Repetition and simulated game situations can help teams develop these critical skills, and meanwhile, the added tension of the Kbands can build strength and condition in the hip flexors and core.

The drill demonstrated in this video, called the MRC 1 vs 1, can be completed by individual players, partners, or teams, and can easily be worked into a regular seasonal training program. The drill requires very little equipment and only a few minutes to execute. Meanwhile, players can study the video to see an example of excellent ball handling technique on the offense.

MRC 1 vs 1 Offensive Soccer Training: Setting Up the Drill

This drill will require one soccer ball for each offensive maneuver (otherwise, players can reset the drill for each rep and use the same ball). The drill will also require a goal and a line of about five speed and agility cones. Each player will need to strap a set of Kbands resistance bands to the upper legs for the first few sets as well. Once the straps are in place, the resistance bands can be clipped to the metal rings. The cones can be set up in line directly in front of the goal at or near the eighteen yard line, and the soccer balls can be lined up several yards away in midfield.

This drill will be broken down into three distinct sequences: The Matthews soccer move, the Ronaldo soccer move, and the Cruyff soccer move. 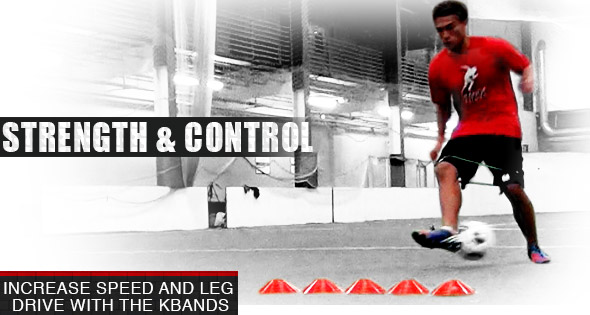 In the first move of this drill, the player will bring the ball toward the final line of defense and take the ball around the line using the same side of the body. If the ball is on the athlete’s right at the approach to the line, it will stay on the right as the offensive player dodges the line and heads for the goal.

To complete this move correctly, the player will move explosively toward the cones, then touch the ball in with the right foot, then immediately follow the ball out to the right at a 45 degree angle. Once the player reaches an acceptable scoring position, he aims for the back post and takes a shot on goal. (The goalie will be working to protect the front post). Players should complete two resisted reps of the Matthews soccer move on each side.

The Ronaldo soccer move begins in a way similar to the Matthews, with the athlete moving directly toward the line of defenders with the ball under complete control. At the line, the soccer player will pass the ball to the left foot, and then will use the left foot to tap the ball behind the right foot. Then the player will move quickly out to the right at a 45 degree angle, taking a shot on goal just as described for the previous move. This transfer of the ball behind the right foot should happen so quickly that the intention is not telegraphed, and the offensive player can move around the line while their attention is diverted to the left. Players can complete two resisted sets of this move on each side.

The Cruyff soccer move is an excellent recovery strategy when defenders dive in toward the offensive player to aggressively take possession of the ball. If a defender approaches and moves in, the player can tuck the ball under the right foot, then change direction and move quickly to the left, taking the ball away from the defending line at a 45 degree angle and once again lining up for a shot on goal aimed directly at the back post. Like the first two moves in this drill, the Cruyff soccer move can be broken down into two resisted reps on each side.

After two resisted reps on both the right and the left side for each of these three moves, players will be feeling a sense of fatigue, and may need to take a short rest break before beginning the final stage of the move, which will include one or two unresisted reps of each move with the tension of the bands removed. Athletes can take advantage of the temporary sensation of lightness to keep the feet fast and the ball under close control.

Kbands Training.com provides a wide range of drills that can help athlete perfect their soccer skills at every experience level. Explore the soccer training section of the site for drills that address passing, shooting, ball handling, and increased foot speed. Success on the soccer field depends on strategy as well as strength and conditioning, and in the Kbands soccer training section, our soccer experts address both and provide powerful demonstrations of necessary game skills.

Take your soccer training program to the next level by checking out these complex training resources and maximizing the benefits of strength-building equipment like the Kbands, KB Powerbands and KB Duo.