A well-played lacrosse game requires teamwork, agility, passing skill, scoring ability, and quick reflexes. But one of the most important skills in this sport—a simple move that change the outcome of any game—involves loose ball recovery. When a ball drops to the ground, advanced players can drop to the ground and scoop the ball before the opposing team can reach it. And collecting the ball is only half of the recovery process. After the scooping action, players need to keep the ball secure and stay in motion across the field, while simultaneously using the hips and shoulders to keep defenders away.

Beginner and youth players will often make common mistakes during the recovery process. For example, they tend to buckle inward at the knees and engage the back more than the knees and hips during the lowering of the body. They may also be easily deterred or thrown off balance by an aggressive defender before they can return to a sprinting motion with the ball secured.

The video below takes viewers through a quick series of moves in an exercise called the lacrosse loose ball drill. This drill requires minimal equipment and can help players build skill at every level of age and experience.

This drill will require a ball for every participant or pair, plus standard lacrosse equipment including sticks and protective gear. Each player will also need a set of Kands resistance training bands to strap around the upper legs before the drill begins.

The added resistance of the Kbands will help build strength in the core and hip flexors during the sprinting and scooping motion. But just as important, the artificial tension will serve to remind younger and less experienced players to counter the knee-buckling effect as they lower the body to the ground during the recovery.

Players will begin the drill by standing beside the ball and bending down for the recovery under the review of a coach or partner who can offer pointers on technique. The athlete should pay close attention to knee width, and should work to keep the bend in the knees and hips rather than the back. The back hand on the stick should stay parallel with the ground at all times. Players should also work to keep the front knee positioned slightly forward in order to block defenders from accessing the ball. This move should be repeated five times.

Set Two: Recovery During the Sprint

During the second set, players will collect the ball by approaching at a sprint and bending for the pickup without losing speed. Again, coaches and partners should be standing by to correct errors and bad habits and appraise technique. During this set, it’s especially important for players to keep the back hand level and the front knee planted forward at the moment the ball is collected. Players should work against the resistance of the bands and use every one of the five reps of this move to correct errors and build positive habits. 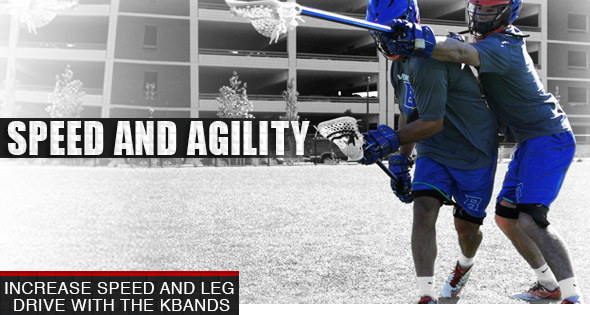 Set Three: Protecting the Ball from a Defender

For the final five reps of the lacrosse loose ball drill, the athlete will approach the ball at a sprint, plant the front leg, drop to collect the ball by bending at the hip and knees, and then retrieve it and continue the run. Only this time, the player will be distracted by a defender who will apply pressure at every step of the move. Defenders should be as aggressive as possible to maximize the benefits of the drill. And players who are taking control of the ball should repel them using the shoulder, hip and front leg. Again, the resistance of the Kbands will serve as a reminder to keep the knees wide during the drop and then recover quickly, bringing power and explosivity to each step of the sprint.

Each of the three sets of this drill will be performed with resistance in place, so players can build strength in the hip flexors, keep the knees positioned correctly, and focus on dropping the hips and driving through the ball during the pickup. If this drill is executed as part of a regular practice session a few times per week, players will develop the coordination, technique and balance they need to attack a loose ball during high speed game situations.

As with most drills that simulate high pressure situations, players can use this exercise to concentrate on all aspects of the move at the same time, from the position of the hips and knees to control over stick during the recovery.

This drill can help teams and individual athletes improve their agility and ball recovery skills, which can help keep the pressure on defenders and keep scores high. But this is only one of many aspects of critical game skill that players will need for a successful season.

To build skill in other areas, including passing, receiving, scoring, defending the net, and executing high speed exchanges in the scoring zone, players and coaches can feel free to explore the lacrosse training section of Kbands Training.com. The site provides a growing list of training videos and tutorials that can help teams make the most of the hours they spend on the practice field.