The Kbands lacrosse circular speed drill allows teams to develop both sets of offensive and defensive skills at the same time. By pairing up and pushing each other to move faster and work harder, players with opposing sets of goals can both elevate their respective games.

Lacrosse players and coaches can watch the attached video and follow along as Trevor Theismann from KbandsTraining.com explains the fundamentals and benefits of this high-intensity set of lacrosse drills. With the addition of the Kbands resistance bands, players will gain the technical skills they need to increase their control of the game, but they’ll also develop conditioning and strength in the hip flexors and core that can lead to greater agility, balance, and speed. These lacrosse drills will take only a few minutes per rep, and they can be incorporated a few times a week into any regular training program.

This drill will require a large number of speed and agility cones, which are available for purchase here at KbandsTraining.com if don’t have them already. These drills will also require a set of Kbands resistance bands for each player (also available on the site), and standard sets of lacrosse equipment including sticks, gloves, and protective gear.

While players are attaching the Kband straps to their upper legs and clipping the resistance bands to the straps, coaches can arrange the cones in two large circles on the field. See the video for an example of what this pattern will look like. Each circle will be about five feet in diameter and the two circles will be spaced about three feet apart, so players can move around them in a figure 8. If lots of cones are used, the edges of the circle will be soft, and players will be challenged to keep moving in a curved line. 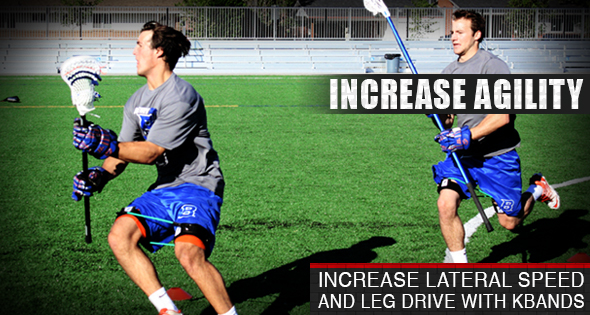 A single rep of the drill means one complete pursuit around one side of the first circle, across the middle, around the opposite side of the second circle, and back to the starting point. The defender should be working the entire time to take control of the ball away from the offensive player, so both players should be maintaining maximum explosive speed all the way around both circles.

The defending player will be the one driving the drill and controlling the speed and challenge level of the exercise. So with that in mind, the defending player should concentrate on the goal of staying close behind the offensive player, keeping an eye out for any exposure of the offensive players net, and then taking advantage of that exposure to close in and take the ball. The harder the defensive player works to keep the pressure on and take advantage of any available stick access, the harder the offensive player will work to get away. If both partners are driving forward, working their stride against the tension of the bands, and focusing on their respective goals, both players will push each other to improve.

After the eight resisted sets, players can remove the resistance bands from the straps and complete two more round of the drill from each side. During the unresisted reps, players should push beyond the temporary sensation of lightness and work hard to maintain full speed and maximum agility.

Lacrosse players and coaches can set up and attack this drill two to three times a week, and this set of exercises should be combined with a wide range of parallel lacrosse drills available on Kbands Training.com. Visit the lacrosse training section for more lacrosse videos like this one and more tips and guidelines on game fundamentals.

The site also offers plenty of information and training resources for other sports as well, including football, baseball, cheer, track, and basketball. And of course, the site is a great place to find information and purchasing details for resistance and suspension training equipment. When applied properly, the Kbands, KB Powerbands and KB Duo can elevate strength, coordination, and overall performance on the field.