Unlike speed workouts for most other sports, effective lacrosse speed drills don’t just emphasize sprint speed, but also circular speed and controlled acceleration and deceleration. During both offensive and defensive maneuvers, lacrosse players at every level need to control their body position and technique as they approach the ball, take possession, and exit the scene a step ahead of an opponent. Even while moving at top speed, lacrosse players need agility, balance, and timing. And all three of these are generated in the hips and core. They’re also generated in the mind, and drills like these train the body to develop the reflexes and response capability that lacrosse players need for high scoring and strong defense.

The lacrosse speed drills in this video are valuable at the advanced level, but they also work well as youth lacrosse drills, and they’re extremely easy to set up and execute. Adding these to any training program a few times a week can elevate both team and individual performance. Lacrosse coaches and players can follow along with the box three drill described here as a group, in pairs, or alone.

This drill requires only a set of four agility cones and a set of Kbands straps and resistance bands for each player. While the players warm up and attach the Kbands straps to their upper legs, coaches can place the cones in a large square about ten yards apart. (Both straps and cones are available for purchase here at KbandsTraining.com.)

For the first portion of this set of lacrosse speed drills, athletes can line up at the starting cone. One at a time, when the starting signal is given, the athlete at the front of the line will sprint toward the second cone, turn, sprint toward the third, and then turn and sprint toward the fourth cone. While the pattern of the drill seems simple, the challenge will lie in the stutter step players will execute at the beginning and end of each leg of the sprint. Players will also need to cut sharply around each cone, which will require high levels of balance and agility. Players and coaches can observe the video for examples of the close distance between the cone and the athlete at each of the turns.

The Kbands add an additional challenge to each of these short sprints, since they require the athlete to exaggerate the knee drive necessary for maximum speed.

The second version of the drill will add complexity by further sharpening the turns. In this version, the athlete will begin at the starting cone, sprint to the second using the stutter step, and then move diagonally across the square. This figure eight pattern will tighten the angle at the turns and increase the need for controlled acceleration and deceleration. 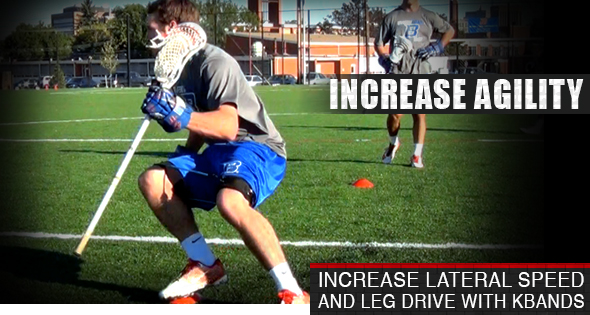 Athletes moving through these two sets of lacrosse speed drills should keep the fundamentals of speed and agility in mind. Gaining speed in small spaces and over short distances will require an adjustment in stride length, in order to maneuver out of the hole, strides should stay short. Energy should take place in explosive bursts, and the chest should stay balanced directly above the bodies center of gravity.

When the chest lowers and moves ahead of the core, the body begins to lean. When the chest falls back, the body also falls out of alignment. In either case, balance is compromised and speed is diminished.

During this drill, offensive players will also need to concentrate on stick position. At each corner and turn, the stick should shift hands so it always stays on the outside of the player’s body relative to the center of the box. Viewers can observe how the athlete in the video shifts his grip seamlessly without slowing down or losing balance.

The final variation of this set of lacrosse speed drills will involve a lateral element, and like the other versions, the challenge of this pattern will be increased by the resistance of the Kbands. During this portions of the drill, each player will begin at the starting cone and sprint toward the second cone in the sequence. Then the player will shift direction without shifting body position and will move laterally toward the next cone in line. At the corner of the box, the player will backpedal toward the final cone, still facing in the same direction.

During this final version of the drill, players will need to focus on lateral agility, control, and hip strength. In this case, these begin with footwork. During the lateral sprint, players need to make sure their feet don’t collide, which means they need to keep a wide stance and low center of gravity without compromising speed. The feet should never crisscross, and the torso should stay positioned directly above the core, instead of leaning.

For each of these three variations, players should complete four resisted sets with the Kbands in place, followed by two more sets of each of the three formations with the Kbands removed. After the bands have been taken off, players will experience a sensation of exaggerated lightness, but they should not allow this feeling to slow them down. The final sets should involve as much explosivity and knee drive as the earlier sets.

For more adult and youth lacrosse drills like this one, emphasizing strength, conditioning, and both offensive and maneuvers, players and coaches can visit the lacrosse section of KbandsTraining.com. The site also offers more information and purchasing details for resistance and suspension training equipment including the Kbands, the KB Powerbands, and the KB Duo.