A successful split dodge requires fast, controlled footwork and proper stick positioning. To develop both of these, players need a drill that can simultaneously build footwork skills, stick handling skills, and muscle condition in the hips and core. This lacrosse split dodge drill looks simple, but it can help players elevate their game across multiple areas at the same time. This drill can be conducted with partners or in teams, and it can be worked into a regular lacrosse training schedule a few times per week.

Athletes on both adult and youth lacrosse teams can follow along with Trevor Theismann and observe the players in the video in order to understand the fundamentals behind this set of lacrosse drills.

This set of lacrosse drills will require the usual lacrosse equipment including sticks and proper protective gear, and it will also require a set of Kbands resistance training bands for each player. (Kbands are available for purchase at KbandsTraining.com). To get the most out of the drill, each set of partners will need a large area of space on the field. With more space available, players can accelerate to maximum speed and simulate game conditions. 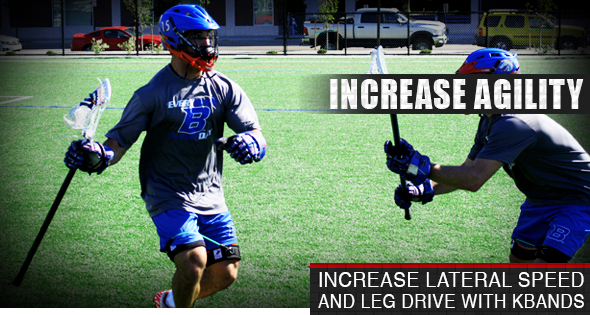 To begin the drill, the primary player will stand several yards away from the defending player and then run in that direction. The approaching player will be holding the stick properly, in the front of the motion rather than trailing behind. Youth lacrosse players and inexperienced players tend to allow the motion of the body to move ahead of the stick, but coaches can pay attention and help them prevent this.

Executing this successfully will require fast feet and strong momentum, so the move should begin with a quick stutter step before the offensive player gains full acceleration. As the offensive player moves toward the partner, he should concentrate on knee drive and work the hips and core against the resistance of the bands. Giving in to this resistance can slow the player down, shorten stride width, and deplete the benefits of the drill.

The benefits of the bands during this drill are heightened during two specific phases of the exercise: first, as the players meet, the offensive player will need to widen his stance and drop his center of gravity in order to maneuver in a lateral direction. The resistance of the bands will generate tension in the glutes, and in in time, this will build powerful lateral strength. Second, after the offensive player maneuvers around the defender, he’ll need to accelerate quickly in order to break away and head toward the goal. A fast breakaway requires strong hip flexors, and the bands target the necessary muscle groups for agility and controlled speed.

Players should complete four to eight reps of this set of lacrosse drills, moving around the defender both to the left and to the right. During these four to eight sets, the Kbands should stay in place. After players master the basics of this drill, they can move on to a modification involving roll-arounds.

In this modification of the standard drill, offensive players will approach the defender, make contact, and then rotate around the opposing player in an outward facing move. Players and coaches can observe the video to see an example of proper footwork and stick positioning during this maneuver.

Technique should be carefully controlled during this move. As the offensive player steps within range, he should take a large final step toward the defender, then roll around to the outside, switching the hands, but continuing to keep the stick close to the body. As in the standard version of the drill, the offensive player will need to complete the move by accelerating at full speed into the breakaway. Again, this will require strong knee drive and a conscious effort to work against the resistance of the bands.

The roll-around modification should be completed for four to eight reps with the Kbands resistance bands in place. More reps may be necessary for beginner and youth lacrosse players, but in all cases, players should concentrate on their footwork and stick positioning skills. If four to eight reps becomes taxing to a beginning player’s endurance, the number of reps can be reduced, but for each rep, the offensive player should focus on putting energy into an explosive run toward the goal.

Players can also take short rest breaks in between each rep so they can replenish their energy and stay explosive during the sprint. In all reps, both resisted and unresisted, players should focus on knee drive, balance, stick positioning and fast foot work.

For more lacrosse drills and training session like this one, lacrosse players and coaches can visit the lacrosse section of the KbandsTraining.com website. The site offers a wide range of sport-specific training drills for baseball, basketball, track, cheer, and football. Coaches and players can also visit the site for more information about Kbands suspension and resistance training equipment, including purchasing details and short videos demonstrating how athletes can gain maximum benefits from the Kbands, the KB Powerbands and the KB Duo.