In a high speed lacrosse game played at an advanced level, passes often take place in rapid combinations and within patterns of high traffic. In order for a fast, multi-player exchange to take place successfully, players need to stay focused on the direction if the incoming pass and turn the exchange around quickly, passing the ball to the next athlete in the sequence without missing a single beat.

This requires fast reflexes, excellent hand-eye coordination, and correct stick positioning and cradling technique. It also requires agility and balance, both of which begin in the core. And most of all, high traffic passes require lots of intense practice.

This drill, called the Lacrosse X passing drill, will require the participation of the whole team. If this short drill is worked into a regular practice session a few times per week, and players add the strength building tension of the Kbands, teams will see rapid improvements in agility, speed, coordination, and passing accuracy.

Players and coaches can observe the video below to see what this drill will look like when it’s underway; the motion seems complex, but once teams understand the pattern and fall into a rhythm, the drill will move faster and bring strong improvements on the field.

This drill will require a set of Kbands for each participant, plus a standard set of lacrosse equipment for each player, including a stick and protective gear. Teams will also need some space on the field and a set of speed and agility cones (which are available for purchase at KbandsTraining.com).

Coaches can set up the cones in a large X pattern, with one cone at the center and four more placed about ten yards in each direction. Teams will begin the drill by dividing into four groups. Each group will strap a set of Kbands to the upper legs, attach the resistance bands to the straps, and gather at one of the four cones of the X pattern.

As the drill begins, players on either end of the north-south line will begin running toward each other and exchanging a rhythm pass. This means the player with the ball will pass to the approaching player coming toward him down the line. The player who receives the ball will keep running allow the first player to sprint past, and will pass the ball off to the next player in line. For more detail on the basic  rhythm passing sequence, visit the lacrosse section of Kbands Training.com.

While the north-south line engages in a simple rhythm passing exchange, the payers at ether end of the east-west line will begin doing the same thing. The first two will approach the center cone at a sprint, exchange the ball, and move on. On both the east-west and north-south lines, the ball will remain close to the center as it’s passed back and forth, but each player will sprint down the line, receive the pass, send it onward, and keep running.

As it takes place, the effect of this double rhythm passing drill will appear chaotic from the outside. Players will need to work to avoid collisions and navigate through the traffic of the intersecting line, and at the same time, they’ll need to stay focused on the incoming pass and not become distracted by the motion around them. This exercise will train lacrosse players to deal with high traffic game situations.  When these situations take place, players who have executed this drill multiple times will be able to keep their high-speed combination passes fast and accurate. 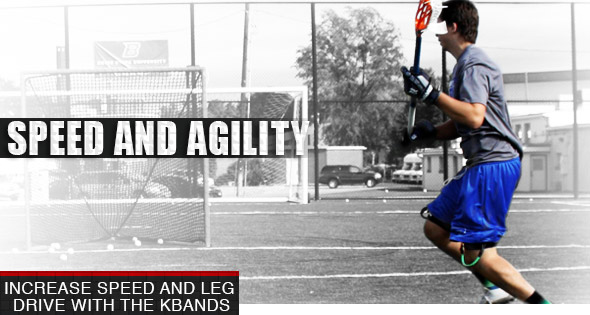 As players begin the sprint from one end of the east-west or north-south line to the other, they should concentrate on beginning and ending the move with proper stick handling technique in mind. The arms should be extended from the body and the stick should be cradled in the upper part of the palm, closer to the fingers than the wrist.

When the stick is positioned properly, it will feel light and maneuverable. The athlete will be able to catch and cradle the ball with flexibility and soft hands, and will be able to immediately transition from a catching grip to a passing grip. A wider distance between the two hands will give athletes more control over the move.

If players are struggling or are new to the game, they can bring both hands closer to the head of the stick for greater control. More advanced players may want to increase the distance of the sprint, widening the square and delivering the passes over longer distances. As the scope of the drill increases, players will want to move both hands farther down the stick to add more force to long distance passes.

The added resistance of the Kbands will increase the challenge and benefits of the drill by placing additional tension on the hip flexors. But to gain the maximum benefits of the bands, athletes should remember to drive the knee up and against the tension at each step of the sprint. Beginning players who need to focus on passing skills first should leave the bands off for the time being, and then add them as passes become more confident and accurate.

This drill can help teams gain an advantage over their competitors by allowing them see through traffic, tune out distractions, and stay focused during high speed exchanges. For more drills that can generate rapid improvements in specific game situations, players and lacrosse coaches can explore the growing list of video tutorials in the lacrosse training section of KbandsTraining.com. These video drills cover every skill area, including sprints, stick technique, scoring, defense, offense, rhythm, and teamwork.

KbandsTraining.com also offers beginning and advanced training videos for a range of sports including baseball, basketball, soccer and track. Visit the site for more training resources and purchasing information for Kbands resistance gear, including the Kbands, KB Duo and KB Powerbands.