The V cut jump shot is the simple shooting maneuver that lies at the heart of the Kbands V Cut Shooting Drill. Like most of the shooting drills on the site, this exercise allows players to develop game skill and muscle conditioning at the same time using only a few simple moves and very little equipment.

The basic principles behind this drill involve the approach to the net and the jump shot, which will vary based on an individual players strategy and shooting style. But in almost all cases, when a player executes a V cut, she moves toward the net and then backs away quickly to receive a pass before taking the shot. The V cut helps athletes navigate through defensive traffic and position the ball, and to complete this move effectively, players will need agility, passing skills, and strong shooting mechanics.

Basketball players will also need strong conditioning in the hip flexors and the core, the two muscle groups that control speed, balance and agility on the court. When the hip flexors are strong, basketball players can stop, start, and change direction quickly. They can begin a sprint with explosive knee drive, keep the center of gravity low as they move across the court, and weave through defensive traffic while maintaining control over the ball and the direction of the game.

With the Kbands resistance training bands strapped in place around the upper legs, players will have two additional advantages during this drill, and any other basketball drill that targets the core and hip flexors. First, the bands place a form of artificial tension on the upper legs, which increases the force required to drive the knee during sprints and direction changes. Second, when large muscle groups are required to put more effort into basic moves, this increases the pressure on the lungs and heart, which over time contributes to greater endurance.

Players and coaches can follow along with the demonstration in the attached video for pointers on technique and mechanics that can help them get the most out of this exercise.

This basketball shooting drill will require only a ball, a net, a set of Kbands resistance bands for each participant, and a set of two speed and agility cones. (Check Kbands Training.com for purchasing information for these and other training supplies.) The two cones can be placed almost anywhere within the scoring zone, but they should be positioned about four feet apart with one cone placed closer to the net and the other placed closer to the player’s original position a few yards away from the closest cone.

At the starting signal, the athlete will begin a sprint from the edge of the court straight toward the cone closest to the net. At the cone, the player will stop, change direction, and head for the second cone. At that point, she’ll receive a pass from a partner or coach and take a jump shot from the location of the second cone.

The execution of this V cut drill seems very simple, but the real benefits of the exercise lie in close attention to body position and shooting mechanics. Coaches should pay close attention to the athlete’s approach to the first cone, direction change, and then body alignment in preparation for the shot. 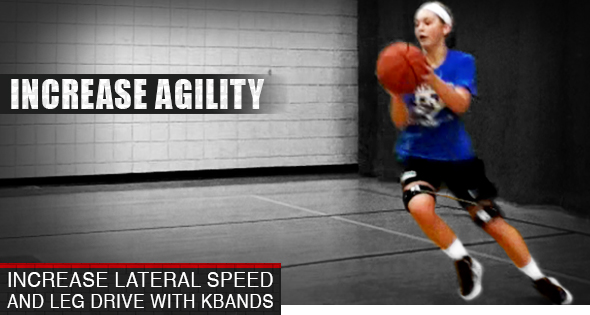 As players leave the starting mark, they’ll need to make a strong, explosive approach to the first cone, which means they’ll need to focus on knee drive and a low center of gravity. The chest should be kept down and the body position should be low and centered. The feet should be fast, and the stride should be wide, but under control. If players keep the body position tall and the chest moves out over the front foot, it will be more difficult for them to explode out toward the wing. A strong, low base will help players get into the box and then back out again quickly in order to line up for the shot.

Players should be conscious of the position of the front foot as they approach the second cone. The dominant foot should align with the shooting hand, and as the player arrives at the cone and takes the pass, the feet should line up squarely with the basket. If the player arrives in this position fast, the legs will be centered under the torso and ready to spring for the jump shot.

This drill will be more effective if coaches and players keep things simple. Start with ten reps of the drill with the Kbands in place, and for each set, move the cones to a different position on the court.
The position of the cones should simulate game situations, so if players are more interested in close shots from the top of the key, move the cones in toward the net. If players are taking three point shots, move the cones back away from the net. Make sure the drill is executed an even number of times on both the left and right sides of the scoring zone.

For more information on how the Kbands can help basketball players improve muscle condition, endurance, and shooting skills, visit the basketball training section of Kbands Training.com. The site offers a large collection of basketball shooting drills and basketball offense drills similar to this one, targeting both beginner and advanced players in every age group. The site also offers training drills for a range of other sports including baseball, track, and lacrosse.