The Kbands pressure defensive drill is designed to help players develop an explosive basketball defense strategy, one that capitalizes on the power and condition of the hip flexors. Successful basketball defense depends on an athlete’s ability to stay balanced and under control while keeping the center of gravity low to the ground and the feet in rapid motion. The drill outlined in this video makes use of the Kbands resistance bands and a set of cones to help players condition the hips and core and focus on agility and explosivity while keeping offensive players on the move.

After setting up this drill, coaches and basketball defense players can follow along with Trevor Theismann as he walks viewers through the drill and provides pointers on technique and body position that can maximize the benefits of this exercise. This drill can be completed by a team, or by individuals working with a coach or partner.

The set up for this drill is slightly complex, but viewers can use the video to get a sense of how the cones are laid out in pattern that allows defensive players to protect the zone. The drill will require eight speed and agility cones and a set of Kbands resistance training bands for each player. While the athlete (or athletes) work to attach the Kbands straps to the upper legs and warm up for the drill, coaches can pay the cones in two parallel lines of three cones each that extend down the court from the net. The remaining two cones can be spaced further apart near the center of the court, on the left hand side. The line between the first and second cone will take the player from the left hand side of the court over to the right by about ten yards. 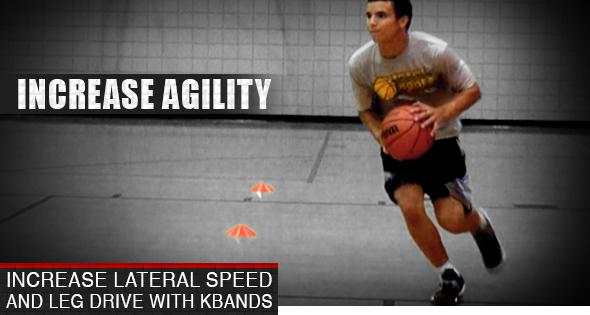 As the drill begins, the primary player will stand at the first cone with his back to the net, and the coach, partner or teammate will face the athlete while holding the ball. The partner will play the role of an offensive opponent, and during the first drill, the focus for both players will be on the partner’s left side. The offensive player will be moving down the court while trying to stay to the right, and the primary athlete—the defensive player—will be working to force the opponent to the left.

The player’s body will move from the first cone to the second in a rapid drop step motion. This distance will be covered as fast as possible with the player’s body in a dropped position and his feet moving in a rapid lateral step that covers as much ground as possible. After this first lateral step from cone 1 to cone 2, the player will move back and forth in a zig-zag motion down the corridor of remaining cones, as if blocking the path of the opponent.

Most important, the defender should be focusing on pushing the ball into the offensive player’s left hand. Working hard to force the opposing player to the left will help the athlete build general defensive skills including strategy and focus as well as strength and agility.

As the offensive player reaches the point at which he wants to cross the defender, there are a few things that the defending player should keep in mind: First, as the offensive player tries to cross over and move the ball to the right, the defender will need to keep his chest square to the opponent, and his hips square as well. This will help to drive the ball back to the offender’s left hand. Second, in the final move of the drill, the defender will need to take possession of the ball as if he’s just completed an effective steal. The coach or partner will roll the ball down the line of cones toward the defender, who will need to scoop it up and complete a fast linear sprint away from the net. This will happen in the form of a power dribble, followed by an outlet chest pass back to the coach.

So the drill can be broken down into two components: Basic control of the offender’s progress toward the net, then basic control of his body position and grip on the ball. The player’s ability to master each of these goals will depend on balance, coordination and hip strength. Weak hips will allow the body to slide out of alignment at each direction change, which can limit the player’s ability to control the game and ultimately steal the ball. Again, during each step of the drill, the athlete should keep the body low and the feet wide, and should work hard against the resistance of the bands.

This drill will require four to six reps on both the left and right hand side of the court with the resistance bands in place. After the resisted reps, players can remove the bands and complete two more reps without resistance. During each set of reps, the coach or partner should roll the ball and receive the outlet pass in a slightly varied way, or from an unpredictable angle that can simulate game conditions.

For more explosive basketball defense tips and pressure defense drills like this one, coaches and players can visit the basketball section of Kbands Training. com. The site also offers additional detail and purchasing information for Kbands training equipment, including the Kbands, the KB Powerbands, and the KB Duo.