During the fourth quarter of any intense basketball game, an athlete can sometimes experience a form of altered technique that some coaches call “fourth quarter legs”. At this stage in the game, players begin to compromise their knee drive and reduce the length and explosiveness of their stride during both offensive and defensive maneuvers. For some basketball players, especially younger players, this can become a kind of straight-legged stride that can raise the center of gravity and compromise a player’s game by decreasing both speed and control over the ball.

In this drill, call the directional dribble, basketball players can use the Kbands to develop greater condition in the hip flexors and core. This stronger conditioning can lead in turn to better endurance, and ideally, as players enter the fourth quarter of the game, they’ll be able to drive the knees as hard and as consistently as they did in the first.

Basketball players with strong core conditioning are easy to spot during the final quarter of a game—These are the players that stay focused and continue to move with speed and total agility while others begin to slow down. Their centers stay low and their knees stay high during breakaways and close offensive or defensive activity in the zone.

In order to develop this offensive speed and consistent endurance, players can make use of the drill described in this video: the Kbands Directional Dribble. This drill is easy to set up and execute, it requires minimal equipment, and it can be worked into any training program a few times a week for excellent results. Dribbling drills for kids, men, women and teenagers can help build strength in the core muscle groups that can control the outcome of the game.

Dribbling Drills for Basketball: Setting Up the Drill

Before setting up this drill, players (or teams) will need a ball, a set of agility cones, and also a pair of Kbands resistance bands for each person participating in the exercise. The Kbands can be strapped in place around the upper legs of each athlete, and the cones can be set on the court in a staggered pattern about six to eight feet apart. The video can provide a guide.

Players can warm up before the drill begins, and when ready, each player will start the drill at the beginning of the line of cones. At the starting signal, the athlete will dribble the ball from the first cone to the second, which will require dribbling the ball with the right hand. At the second cone, the player will change direction and move toward the third cone, and the ball will switch hands to the left side.

This drill will challenge the athlete’s ball handling skills, since it will require fast crossovers and direction changes. And it can also help players build strength and condition in the hips and core. Footwork, endurance, coordination, and speed are all central to the success of this excercise, and all of these will be supported by proper body position and careful observation on the part of the athlete’s coach or partner. This drill can be executed individually or with a team. 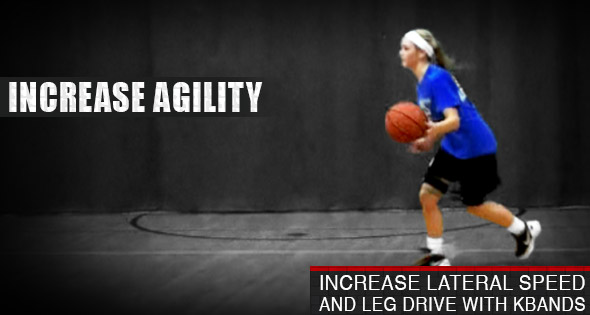 As they move through this drill, athletes should concentrate on position and coordination during the crossovers and straight sprints. As basketball players move the ball between each cone, they’ll need to concentrate on keeping the chest low and the stand wide. At each stride, the knees should drive in the direction of motion and players should avoid straight legs and a high upper body. This will become more challenging after a few reps.

Since this is a conditioning drill with an emphasis on endurance, it should be executed continuously at top speed for about two to four minutes. Players should focus on maintaining tight turns and strong ball handling skills at each rep. The crossovers should take place without a pause, and players should keep their attention on the direction of motion and visualize each cone as a member of the defending team.

After each two to four minute rep, players can pause for minute to a minute and a half before restarting the drill at the beginning of the line of cones. If this drill is executed properly and athletes maintain full speed, knee drive, coordination, and focus throughout the entire session, then the drill should become more challenging during the final reps. As part of a regular training program, repeating this exercise a few times per week during the peak raining season can help players stay fast and under control while navigating through defensive traffic during game situations.

In order to maintain both speed and agility during the final quarter of a fast-paced game, players will need to develop condition two areas: the large muscle groups responsible for speed, and the combination of the heart and lungs. Well-conditioned athletes, specifically basketball players, have fast feet and strong knee drive even during moments of fatigue. They also maintain tight control during direction changes and ball crossovers.

To develop these skills, players need practice on the court and they also need a regular program of strength training. The principles behind Kbands resistance equipment can provide both of these benefits at the same time. When the resistance bands are in place, the core and hip flexors are placed under pressure, and the increased demands for speed and explosivity can build power in the heart and help the lungs deliver oxygen to the body. While muscles gain strength, athletes also gain endurance, and since they do this while executing complex drills on the field, they develop game skills at the same time.

For more on how the maximize the benefits of the Kbands, KB Powerbands, and KB Duo, coaches and athletes can visit Kbands Training.com. The site also provides training sessions and sports specific drills like this one for basketball, football, baseball, cheer, track and field, soccer and lacrosse.