Effective basketball drills for guards usually focus on skill development in a few core areas. First, they help players build light speed reflexes in response to changes on the court. Second, they build lateral strength and conditioning in the hip flexors, legs and core. And finally, they help players gain a sense of balance, control, and stability that help them score and pass accurately while staying light on their feet.

This set of basketball defense drills can address all of these skill areas, while also building the endurance that guards and defenders need in order to cover the entire court and keep moving at top speed. These basketball defense drills demand full attention and engagement from players, but they also use the added resistance of the Kbands to compound the difficulty of the drill and place extra requirements on core muscle groups.

Basketball players and defensive coaches can follow along with this video as Trevor Theismann of Kbands Training takes viewers through a series of basketball drills for guards. Once the principles of the drill are understood, coaches can work these drills into a regular training program a few times a week.

Basketball Drills for Guards: Setting Up the Drill

For this drill, players will need a ball and net, three speed and agility cones, and a set of Kbands for each participant. The drill is easy to set up; the cones simply need to be laid down in a row parallel to the backboard. Two cones should be placed at the elbows marked on the court, and one can be placed in between the others. Meanwhile, each player can attach the Kbands straps to the upper legs, clip the resistance bands to the straps, and warm up briefly before the drill begins.

While the player sprints back to the center cone, the partner or coach will grab the ball. As the player moves rapidly in a lateral direction back and forth between the three cones, the partner will telegraph a pass in any direction—to the left, right, center, or anywhere in between. After a few signaled passes, the partner will send the ball in a pass that’s high, low, slow or fast. It doesn’t matter how the pass is delivered, but the partner should change the pattern and keep the defensive player on his or her feet and moving rapidly back and forth between the cones.

As soon as the defensive player receives the pass, he or she will complete one power dribble, move forward rapidly, and take another lay-up shot before once again sprinting back to the cones and starting the drill over from the beginning. 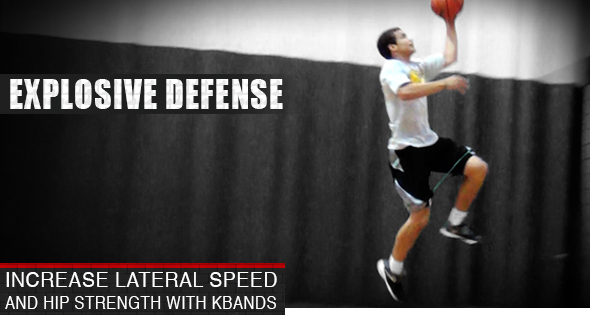 Basketball Drills for Guards: The Benefits of Basketball Defensive Drills

In addition to helping defensive players build fast reflexes and accuracy on the pass and lay-up shot, this drill provides an excellent way for basketball players to maximize the benefits of the Kbands resistance bands. But the bands can’t do all the work; if players give in to the resistance and don’t use the bands properly, they can develop lazy legs. In other words, the length of the stride will shorten to accommodate the additional resistance, and players won’t obtain the full benefits of the training equipment.

Instead of allowing the bands to reduce stride length, players should aggressive work against them, both during the back and forth defensive maneuvers and during the sprint toward the net for the lay-up. If the bands are being used correctly, players should feel a burn in the hip flexors and core, and their heart rate should rise quickly during the drill. The entire sequence of this set of defensive drills should tax a player’s endurance and leave him or her tired and in need of a break.

The best way to focus on getting the most out of the bands will come from paying close attention to stance and body position. Players should not allow the bands to pull them into a straight, upright position. Instead, they should work on staying centered and low to the ground. The knees should drive the body at every stride, and players should execute the final sprint to the net at top speed.

Basketball Drills for Guards: Fundamentals of the Drill

This drill can be completed with an entire team rotating through the sequence one player at a time, or it can be completed individually with only one player and a supporting partner. In either case, for maximum benefit, defensive players should complete four to six reps in quick succession with a one to two minute break in between. The first four to six reps can be executed with the Kbands securely in place. This sequence can be followed by two more reps with the resistance bands removed so the legs can move freely. Coaches and players can work this set of defensive drills into their regular workout routine a few times a week for the fastest results.

For more information about the benefits of the Kbands resistance and suspension training equipment, including the Kbands, the KB Duo, and the KB Powerbands, visit the website at KbandsTraining.com. Basketball players and coaches can also find a wide range of defensive and offensive drills similar to this one by exploring the site’s basketball training section. The available videos and basketball training material can provide support for teams of any age, at any skill level. And in the meantime, players and coaches can access online purchasing information for sport training products like speed and agility ladders and cones.