Athletes can enhance their lateral jumps and improve their vertical jumping ability by building power in multiple planes of motion. Exercises like resisted single legged lateral jumps compliment and enhance the box jumps benefits by making the athlete explosive in multiple directions. Although an athlete will rarely be required to hop on one leg down a soccer field or have a basketball player stand and jump as high as they can. However, overemphasizing these movements helps athletes to use lateral jumps and box jumps to build more power during a quick cut on an opponent or having the maximum vertical jumping ability to snag a pass or throw high out of the air.

Whenever an athlete is training by themselves or with their team, coach, or training partner they need to know why they are training and what they hope to accomplish. If an athlete wants to induce proper box jumps benefits and improve vertical jumping ability then a certain pace must be maintained. If proper rest periods are not observed then the athlete will become fatigued and will have diminished lateral jumps and box jumps benefits. However, if an athlete is training to condition their body for the rigors of athletic competition then a higher tempo and pace should be observed.

Athletes should always be aware of the purpose of their training and the time of the year for the athlete. If the athlete is in their early offseason then more emphasis should be placed on building strength and power. Strength and power are trained at a slower pace but with a higher load or level of resistance. Athletes can go to the Training Section to observe different power and strength exercises with the KB Powerbands, Ballistic Bands, and Victory Ropes.

As athletes get closer to the beginning of their competitive season it will be important for them to back off from the strength and power training and begin to incorporate more sports specific drills and higher intensity exercises. These higher intensity exercises will help athletes to capitalize on and improve their vertical jumping ability and lateral jumps by being quicker and more explosive when performing sports specific movements. This phase is important to allow the positive adaptations that occurred during the offseason strength training to translate into additional success while competing. For sports specific drills and conditioning drills athletes can go to the Training Section. 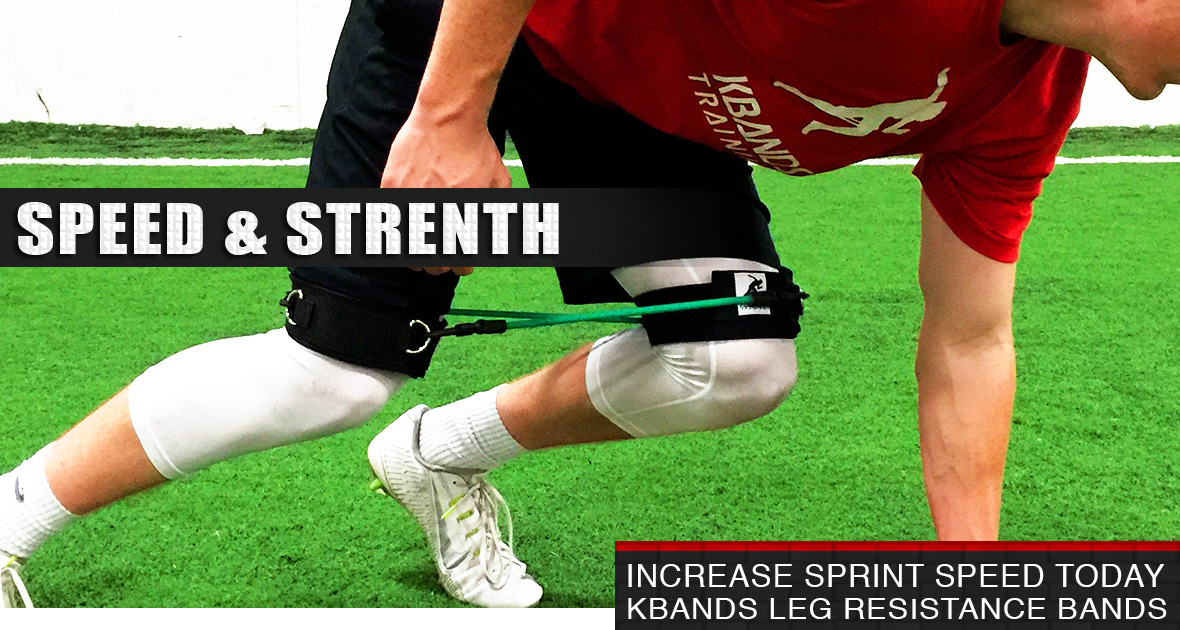 Perform 8-10 resisted rounds of the Kbands Hurdler Box Jumps allowing 30-45 seconds of rest for athletes training for strength and power, and moving continuously through the drill for athletes who are using the box jumps benefits and lateral jumps to train their body for competition.

When athletes are performing lateral jumps on a single leg they must protect their knees, hips, and ankles by utilizing great form and technique. When athletes take off on their lateral jumps they need to be aware of the position of the knee. As the Kbands Leg Resistance Bands place tension on the leg and pull the knees in it is important that athletes actively think about keeping their knees wide and not allowing them to internally rotate. The same knee out approach should be taken when landing the lateral jumps. This proper body positioning will allow athletes to build the strength in the thigh and hips to protect the knee from ACL or other knee injuries.

When performing lateral jumps athletes will also need to focus on the flexion at their hips and knees. Athletes do not want to squat down and then perform the lateral jumps. Athletes should instead think more like they are doing a dead lift, flex at their hips, keep a slight bend in their knees, maintain a straight back and tight abs as they explode across the hurdles. Loading the arms back and swinging through the lateral jumps will allow more muscles in the thighs and glutes to be utilized and trained for future lateral jumping activities.

Box jumps benefits can be fully engaged when athletes use great body positioning and movements. In order to improve vertical jumps, athletes need to place a greater than normal amount of stimuli on the muscles which control that movement. Since the muscles in the thighs, hips, and legs have already been fatigued from the lateral jumps athletes bodies will need to recruit more muscle fibers to complete the final box jump. Athletes should again make sure their knees stay wide and do not internally rotate as they work to improve their vertical jumps. Pushing the knees apart and landing with wider knees will help to protect the knees and hips from injuries. Athletes should also avoid squatting for the box jump and observe a greater level of flexion at the hips to accelerate the body up. A good arm swing is the final piece to utilizing this drill to improve vertical jumps and lateral jumps.