Two of the most important athletic factors during competition are a competitors ability to quickly start and stop. An athletes ability to decelerate allows them to be more multidirectional, while acceleration allows athletes to quickly move from one point to the next. Both aspects are critical for athletic development in young athletes and both can be improved by practicing the Youth ACDC Drill.

This youth football practice drill allows young athletes to improve on their acceleration. By adding resistance with short, multidirectional movements, athletes are able to build hip and glute strength. The hip and glute development, along with improved footwork and running technique, are all beneficial to young athletes as they work to master the fundamentals of sprinting and multidirectional movements. 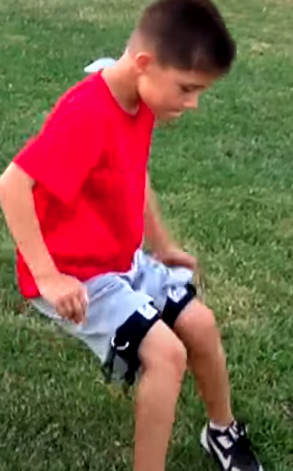 To set up the youth football conditioning drill young athletes will need 6 Speed and Agility Cones, a set of Youth Kbands (begin with yellow resistance bands and progress to red bands), and a coach or parent to supervise the youth football practice drill.

Begin by placing 2 rows of 3 Speed and Agility Cones separated 3-5 yards apart. Young athletes will attach the Kbands just above the knees, and position themselves at the back corner of one of the Speed and Agility Cones. Athletes need to be sure to begin the football conditioning drill in a good athletic stance.

Coaches and parents need to give ample rest time in between sets to allow the youth football practice drill to be performed explosively and with proper form and technique. 45-90 seconds, depending on the athletes fitness level, is a proper amount of time to let youth athletes recover and focus on the youth football conditioning drill.

Coaches and parents supervising this youth football practice drill need to stress the basics to their young athletes. In order for younger athletes to develop into more explosive players they need to master the fundamentals in order to take their training and athletic abilities to a higher level.

While performing the Youth ACDC Drill athletes need to have good footwork, knee drive, and good center of balance. Young athletes should not let their feet flop out to the side during the backpedal phase of the football conditioning drill. Athletes need to backpedal with chest forward, good arm pump, working off the balls of their feet, and keeping everything in a direct line.

Attention needs to be payed to the athletes hips as they transition from their lateral sprint into their backpedal. Be sure athletes keep their hips square to the Speed and Agility Cone in front of them.

During the sprinting and acceleration phase of the youth football practice drill, athletes need to practice good running form. This means athletes have a good arm pump, chest down working off the balls of their feet, driving their knees through the resistance. Athletes need to be explosive on their sprints and backpedals to really challenge their acceleration and deceleration abilities.