The Kbands Scramble Drill combines the resistance of Kbands Leg Resistance Bands while simulating an athlete playing football. Chopping your feet, then exploding to make football plays, is a basic Football 101 concept which athletes are taught at a young age. The Kbands Scramble Drill will help athletes to hone these skills resulting in making more football plays and playing football at a higher level.

Athletes will first attach their Kbands just above their knees, stand at the middle Speed and Agility Cone, and begin to drive their knees up. As athletes are driving their knees their partner will call out one of the outside Speed and Agility Cones for the athlete to sprint to, touch with their hand, and then sprint back to the middle of the Kbands Football 101 Scramble Drill and continue to drive their knees up. Athletes will perform the Football 101 Scramble Drill for 12-15 seconds. This should allow the athlete to touch 2-3 cones. This dynamic movement is great for simulating football plays and will help football players of any position become better. Complete 4-6 resisted sets of the Football 101 Kbands Scramble Drill before removing the resistance and performing 2-6 unresisted sets of the Kbands Scramble Drill. Athletes should rest 90 seconds to 2 minutes between sets.

For the Kbands Dynamic Suicide Sprints football players will need a set of Kbands attached above their knees and 3 Speed and Agility Cones placed in a straight line at 5 yard increments. Athletes will perform this Football 101 Drill in three segments.

When athletes are performing the final two variations of the Dynamic Suicide Sprints and are making the turn at the second cone, transitioning from a backpedal into a sprint, it is important they alternate which way they turn. Alternating which direction they turn will aid them in developing great change of direction to both their left and right side. After performing all resisted sets of all three Dynamic Suicide Sprinting variations athletes will remove their Kbands and perform 2-3 unresisted repetitions of each Football 101 Drill, remembering to alter which way they turn when transitioning from the backpedal into a forward sprint. Athletes will want to take 40 and 90 second rest periods between sets of the Football 101 Dynamic Suicide Sprints. 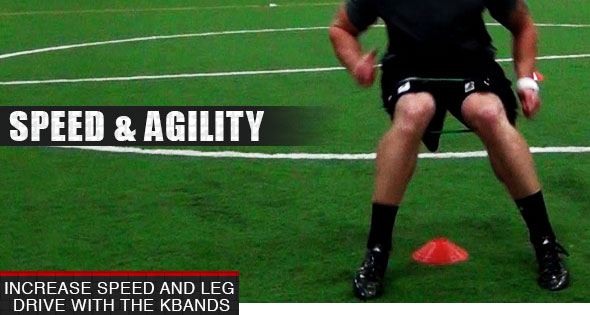 Athletes can perform the Football 101 Speed Knee Ups by setting up 3 Speed and Agility Cones spaced 5-8 yards apart in a straight line. Although most football plays do not happen in a straight line this Football 101 training helps athletes learn how to efficiently use their bodies to change directions by utilizing a powerful leg drive, high stride frequency, and good body positioning for playing football.

To make this Football 101 Drill easier for the athletes performing it they can utilize a partner or coach to give cues (such as a clap or a loud “go” call) to signify when the athlete should advance to the next Speed and Agility Cone. Athletes need to alternate which way they turn at the last Speed and Agility Cone so they can develop great change of direction from both sides of their body. Athletes should perform 3-5 resisted sets of the Football 101Speed Knee Ups Drill before removing the Kbands and performing 2 unresisted sets, remembering to still alternate which direction they turn at the final Speed and Agility Cone. 1-2 minutes of rest should be given between sets so the athlete can maintain a good level of energy, body positioning, and speed as they work through the Football 101 Speed Knee Ups.

Use A Great Warmup And Great Form When Mimicking Football Plays

Before the Football 101 Drills can be completed athletes need to ensure they have performed some kind of static or dynamic warmup to prepare their bodies for the football drills. Athletes can find great static stretches with the Kbands Stunt Strap in the Recovery Section. Great dynamic warmups include drills like the high knees, karaoke, butt kickers, or light sprints. These movements mimic the movements athletes go through when playing football and will help prepare their hips and legs for the Football 101 Speed Drills.

When performing the Football 101 Speed Drills with resistance it is important proper body positioning is maintained and the athletes normal running motions are not altered. This means athletes need to work through the resistance and utilize a powerful arm swing on all repetitions of the Football 101 Drills. Going 110% during these drills will translate into making more football plays while participating and playing football games.