Off season training sessions provide an excellent time to bring baseball players to the plate or the tee and refresh minor issues that may have affected the stance during the active season. Drills like this one, called the Rhythm of Three, can help baseball players make corrections to the swing by concentrating on explosive power, rotational motion, and the generation of force in the lower body.

As always, a perfect baseball swing is built on two core aspects of motion: a strong foundation in the lower body, and a powerful, controlled rotation in the hips and core. The force behind the swing starts with proper foot and leg placement, then builds in the core, then is gathered in the rotational motion of the hips during the swing, then is finally delivered through the arms.

Every small aspect of body position contributes to the force that’s delivered to the ball, and small misalignments and position problems can dissipate this energy before it reaches its destination. So during the off season, baseball players can spend some time with the tee-- or with a partner--working to correct and adjust their baseball swing with drills like this one. This drill should be considered supplemental and doesn’t need to be worked into a regular in-season training routine, but it can certainly help baseball players maintain proper form when they’re away from the field.

To set up this simple drill, baseball players need only a bat and ball, a tee (or pitching partner), and a set of Kbands resistance training bands that can be attached securely to the upper legs just above the knee.

The Rhythm of Three Drill: Explosive Power in the Lower Body

The rhythm of three drill will focus the player’s attention on building explosive power in the lower half of the body. This power begins with proper foot and knee position. When the feet and knees are correctly aligned, the player can concentrate on rotational motion in the core. Then finally, during the swing, the baseball player can work on driving the concentrated power through the ball. These are the primary focal points of the drill:

1. Lower body explosion
2. Foot, knee and hip drive
3. Drive through the baseball for the entire swing

Once again, the development of the lower half of the body and focus on rhythm in the swing should be considered primarily during the off season, as a refresher. This should not be a core element of instruction during the regular season.

Body Position during the Rhythm of Three Drill

Players should begin the drill by envisioning a ball held between the knees with an application of pressure that lies inside the leg, at and just above the knee joint. Once the correct stance is established, baseball players will lift the front leg and raise the knee up toward the chest. This will happen three times with the following points kept in mind:

As the foot comes down to the ground the third time, the baseball player will channel the momentum of the kick into the drive in the hips and the power behind the ball. The explosive force in the hips will be concentrated and sent up through the arms and into the baseball swing. At all times, the foundation and stability in the lower body should stay strong. 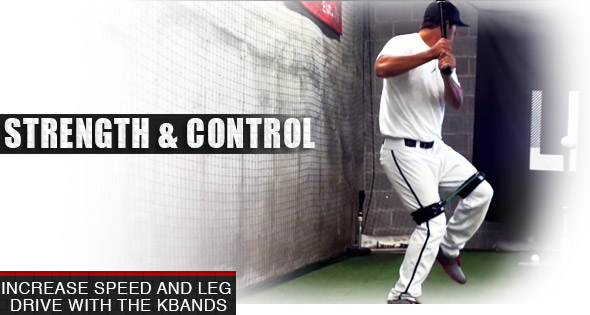 Benefit of the Kbands During the Rhythm of Three

With the Kbands in place, baseball players can feel an increase in lower body tension at the points where the imaginary ball is held between the knees. This tension can help keep the lower body stable while rotational motion is generated in the hips. With the extra tension added to the move, baseball players can develop strength in the muscle groups necessary to deliver force, control, balance and explosivity to the swing.

Baseball players should complete three sets of ten swings each with the Kbands resistance bands in place. This way they can build strength and tension in targeted areas of the lower body, specifically the inner legs, hips and core. This muscle memory players develop during these sessions will be called into play during the active season.

Between each of the three resisted sets, baseball players should unclip the resistance band from the straps of the Kbands, and then execute one set (of ten swings) with no resistance. During each baseball swing and each repetition of the three leg lifts, baseball players should bring maximum effort and maximum concentration. The goal will be to ingrain this stance and drive so both will become automatic by the time the season begins. Here’s a quick breakdown of these points:

It’s important to alternate and break up the resisted sets with unresisted sets so athletes can feel the drive on their own and learn what it’s like to maintain the correct tension without the targeted guidance of the bands. During each of these sets, both resisted and unresisted, baseball coaches should keep an eye on tension in the feet and legs and correct positioning during the triple leg lift. Coaches should be careful not to let players develop unconscious habits that can undermine the benefits of the drill.

This drill can be worked into off season training sessions, and can be supplemented with any other drill from the library of resources at Kbands Training.com. Visit the site and explore the baseball section for a wide range of training tips, coaching tips, and video workout sessions that can help baseball players develop the skills and muscle strength that bring success on the baseball field.