When it comes to body mechanics and baseball, there’s no aspect of the game that depends more on subtle alignment then the baseball swing. Proper hitting mechanics can take a long time and a great deal of practice to master. And very small adjustments in position can have an enormous impact on the likelihood of connection and the power behind the swing when the connection happens. For baseball players, the best way to work on proper hitting mechanics is to stay under the watchful eye of an experienced coach and be careful to cultivate good habits and avoid bad ones. For coaches, the best way to improve a team’s batting average is to pay close attention to development and progression of each player’s baseball swing and make sure each element of the swing falls in line with the stages and position details described in the video below.

Proper hitting mechanics begin with a correct stance and weight distribution in the lower half of the body. Start with these three elements:

1. Leg width. The legs should be slightly wider than the shoulders.

3. Knees. The knees should be slightly bent and locked solidly into position. There should be a concentration of pressure and muscular tension in the knee area, as if the baseball player is holding a large ball between his knees.

Once the elements of the stance are aligned and under control, it’s time to focus on the baseball swing. Since the swing motion begins where the inside foot connects to the ground, it makes sense to concentrate first on lower hip rotation and drive through the foot and up the leg.

As the baseball player loads for the swing, the focus should be on the back leg, as follows:

1. Tight knees. Even as the body begins to move and drive develops behind the swing, the knees should stay tense. The baseball player should continue feeling like he’s holding a ball between his knees.

2. Ball of the foot. Before the swing begins, the baseball player should ensure a solid connection between the ball of the inside foot and the ground.

3. The back hip stays in front of the leg. Don’t let the hip and the leg move out of alignment.

4. Meanwhile, the head should be straight up and down, not tilted. The eyes should stay focused on the pitcher so squarely (not at an angle) that the bridge of the nose is not visible. As the ball moves forward toward the hitter, the chin will move through a complete progression from one shoulder to the other. In other words, the eyes should squarely face the ball during its entire path.

As the baseball player begins the swing and moves forward, the weight should land softly on the front leg. Then the player will begin the push, moving the drive from the ball of the foot up the leg through the hip. This is not a rotation or a squish, but a drive. Players should envision preparing to run; before breaking into an explosive running motion, the body generates power from the bottom up, instead of twisting the foot inward and then taking off. 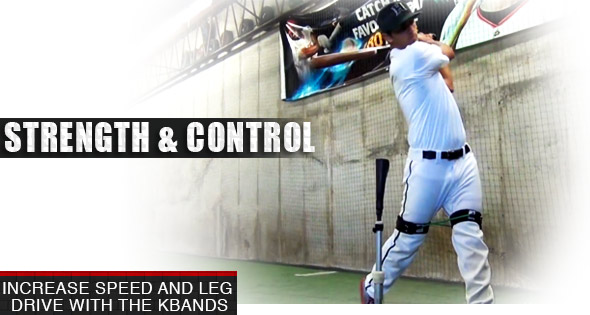 Before the baseball wing begins, the player should focus on maintaining a correct grip on the bat. A few key pointers to bat grip are as follows:

1. A relaxed stance. Instead of hunching over and tensing up, the baseball player should adopt a relaxed upright stance in the upper body as if having a conversation with someone.

2. Back hands in line with shoulder. Both hands should begin the baseball swing above the armpit level and in line with the shoulder.

3. Line up of knocking knuckles. Each of the three knuckles used to knock on a door—the knocking knuckles—should be lined up straight, and all six of these knuckles should form a straight line down the handle of the baseball bat.

4. Elbow height. The front elbow should be lowered, but the back elbow can be high or low depending on personal preference.

Proper Hitting Mechanics: Separation of Upper and Lower Half During the Drive

As the lower half of the body begins the drive as described above, the upper half will begin to separate and move out of alignment with the legs. This separation will involve three distinct elements:

2. The elbow drive: The front elbow will move down with force and drive of the baseball swing.

Proper Hitting Mechanics: The Follow Through and Final Stages of the Baseball Swing

As the motion above comes to an end and the force of the swing connects with the ball and follows through with the next six inches, the arms will push forward slightly. The baseball player should keep in mind that this entire final motion will move north-south, not east-west.