Softball speed drills provide a critical component of any training program designed to help runners and fielders build agility and explosivity. During straight runs, high performance players need to burst quickly from a standstill to full speed. And in the field, players need to stay light on their feet, agile, and balanced. A softball workout using ladder drills, like the one demonstrated here, can help players attack both speed and footwork. The added tension of the Kbands resistance bands can also help players increase strength in the muscle groups that control agility and running speed, including the hip flexors, the glutes, the quads and the core.

These softball speed drills using the agility ladder and the Kbands can be set up and executed by individual players looking for ways to elevate their performance on the field, but they also work well as team drills, which is how they’re carried out in the demonstration video.

Coaches who decide to work these softball speed drills into a training program can watch closely as Trevor Theismann explains the drill to a young group of players and gives pointers on form and technique as they move down the ladder. To get the most out of this drill when working with a team, coaches will need at least two agility ladders and a set of Kbands resistance bands for each player.

The ladders can be laid along the ground in parallel form, and the team can be divided into two groups, one for each ladder. Players should each begin the drill with a set of Kbands resistance bands attached around the upper legs. The straps should be secure and the resistance bands should be clipped to the metal rings with the short band in front and the long band in the back.

In each group, one player will move down the ladder at a time, focusing on foot placement and speed. During each set, the feet should stay under control, the arms should stay engaged, and the shoulders should be relaxed. Most important, players should make sure their knees stay high and drive against the resistance of the bands at every step. This is the best way to maximize the benefits of the drill and gain the muscle strength and speed necessary to improve performance.

The first move down the ladder will be a simple run with high knees. The player will move down the rungs of the ladder placing a foot between each rung and bringing the knees up high at each step. Again, the engagement of the arms will have a significant impact on speed and agility development, so coaches should observe arm movement and make sure players keep the arms elevated and in motion. Each player should cycle through and complete this drill three times.

The second drill in this softball workout can help players develop lateral quickness, which can increase speed during side to side motions. Lateral speed balance and agility can help players expand their range of motion while fielding ground balls. For this drill, players will turn to the side and move down the ladder leading with the right or left side of the body. Again, arm engagement and high knees are essential to success with this drill. As in the video, coaches should keep an eye on form and make sure players are using proper form as they work their way down the ladder. As with the first drill, this move should be completed three times by each player.

During the third drill, players will keep their feet wide and move down the ladder facing in the direction of motion. As they move from rung to rung, they’ll hop from left to right, keeping one foot between the rungs and the other foot outside the ladder at all times. The feet should never touch or interfere with one another and should stay wide during the entire drill. Coaches should make sure players stay fast and under control as they lift their feet in and out of the ladder on either side. 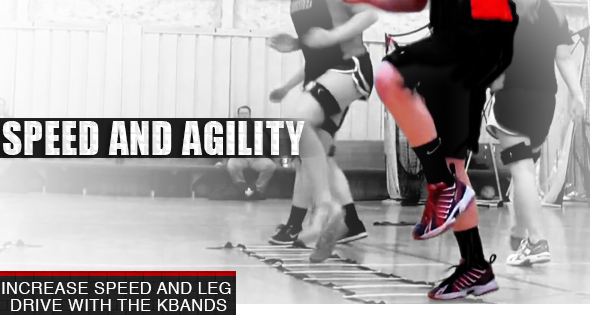 After moving through each of these softball speed drills three times, players can unclip the resistance bands from the Kbands straps so the legs can move freely. Then they can execute each of the drills in the set one more time with no resistance. For several minutes after the bands are removed, players will experience a neurological sensation of extreme lightness. This light feeling can help players focus on footwork and agility as they work to maintain speed and keep the knees high during the last round of softball speed drills.

For maximum benefits, coaches and players can work softball speed drills like these into a training program at least once a week. In the meantime, visitors can explore the Kbands website for additional training videos and coaching resources that can help teams build speed and agility on the field. The site offers training tips and targeted workouts that help athletes maximize the benefits of resistance and suspension training equipment, including the Kbands, the KB Powerbands, and the KB Duo.