Lacrosse is a game of speed and agility, and at the highest levels, victory almost always belongs to the team that can execute rapid strategy shifts and direction changes without slowing down or missing a beat. The popular Kbands pro agility drill has been used to help hundreds of teams stay focused and on their feet during full speed reversals, and as a follow up to the initial version, the video below now offers a modified pro agility drill that can help expand on the same set of benefits.

Like the original drill, the modified lacrosse pro agility drill is designed to help players build the hip flexor and core strength they need for high speed direction changes. These moves can help build speed and strength during lateral moves, and they can also help players maintain their balance and recover quickly from a direction shift. Explosive speed on straightforward sprints will also help players cover ground and control the field and this drill can support sprint speed as well.

This modified drill will require five speed and agility cones (which are available for purchase at Kbands Training.com). The drill will also require a standard set of lacrosse equipment for each player, including a stick. Each participant will also need a set of Kbands resistance training bands that can be attached to the upper legs.

While the athletes are warming up, coaches can place one cone in the center of the field and two other cones to each side of the first about five yards away. The fourth and fifth cone will be placed five to ten yards away from the center cone on a perpendicular plane, so the pattern will resemble a diamond shape around the center cone. As the drill begins, two lacrosse players will be standing at the far cones, facing the center. 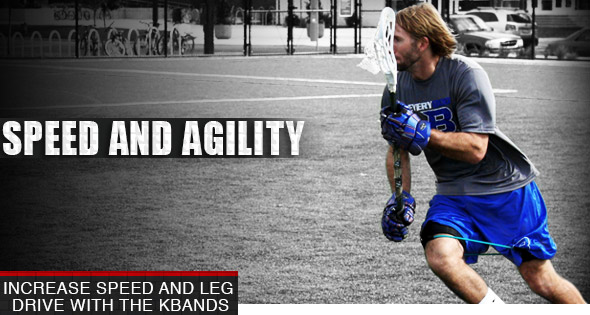 In order to gain the maximum benefits from this drill, players will need to keep moving at the fastest possible pace. And to establish a sense of competition, both participants should start the drill at exactly the same time. Coaches can use a signal or a starting trigger to send both participants into an explosive sprint toward the center cone at the same moment.

At each launch point and every direction change, players will need to explode through the resistance of the bands. By fully engaging the core and hip flexors, pushing through the resistance, and not allowing the bands to control range of motion or speed, players will build the force and power they need to stay stable on the turns without compromising speed on the straightaway.

The element of competition will help players focus on speed. And this element will also help athletes develop balance and control, since a single misstep can cause a player to stumble at the turning point and fall behind. Both explosive sprint speed and controlled balance are crucial during game situations, so by competing with each other, players will be forced to push their agility, speed, and balance to the limit.

As the athletes approach each cone and new direction change, the center of gravity should drop and approach the ground. The lower the body position, the more controlled the deceleration will be. And the player rotates and explodes back into motion, a low body position will drive the knee up and push the hip flexors against the resistance of the bands. Players and coaches can observe the athletes in the video and notice how they drop to the ground on the approach instead of hyperextending the leg and slamming on the brakes.

As they turn and burst into motion again, they rise up from the ground with the knee first. Tilt and dig, and the body will stay centered throughout the entire move.

Meanwhile, as players focus on speed, they should also pay attention to stick skills. The stick should stay on the outside of each sprint, and as players shift hands and change the direction of motion, they should maintain proper cradling technique at all times.

Each player on the team (regardless of their position) should complete four to six sets of this drill with the resistance bands in place. After everyone has a chance to execute their resisted sets, players can start over and complete two sets each with no resistance. After completing this drill, lacrosse players and coaches can move on to the next agility drill in the series: The Kbands circular speed drill. Find this session in the lacrosse training section of KbandsTraining.com.

Kbands training offers a wide range of training drills that can support success in several sports in addition to lacrosse, including basketball, football, baseball, track, and soccer. Coaches and players can visit the site and search the relevant section to find warm-ups, drills and exercises that build strength and speed. And they can also find detailed tutorials that delve deeply into fundamentals like pitching and complex passing maneuvers.

Understanding the basics will be a great first step, but in order to see real results on the field, players will need consistent practice and the watchful attention of coaches who can correct small technique issues before they become ingrained. Teams can also benefit from the targeted resistance of sophisticated training equipment like the Kbands, KB Powerbands and KB Duo. The site provides more detail and purchasing information for all three.