Athletes are often required to quickly move laterally during a kids football game. By incorporating the Kids Football Lateral Sprint And Catch into a regular training routine youth football players will be able to improve their ability to quickly move laterally and keep their bodies in good position to make an athletic play. Plays which highlight a kids football players need for lateral speed include a linebacker attempting to stop a running back who is running outside of the tackles. Linebackers can make a great play by quickly moving laterally and keeping their hips and shoulders squared up in front of them. This great body positioning allows the linebacker to quickly change directions and make a play on the running back.

Before performing the high knees exercise athletes need to be sure they have properly prepared their body for athletic training. Youth athletes should go through a dynamic warmup involving forward, lateral, and backward movements. Exercises such as pushups or pull-ups can be performed in small amounts to prepare the arms and shoulders to perform the Kbands high knees exercise. Athletes can view demonstrations on how to stretch the muscles of the legs, hips, and arms in the sports training section.

To begin the Kbands high knees exercise athletes will drive the knees up and quickly move laterally quickly placing both feet between each row of Speed and Agility Cones. Athletes will keep hips and shoulders pointed in front of them. Once athletes make it through the 6 cone formation they will quickly sprint around the outside of the single Speed and Agility Cone, turn, and receive a pass from their partner. Athletes will perform 6-8 resisted repetitions of the high knees exercise before removing the resistance and performing 4-6 unresisted sets of the kids football drill. Athletes and coaches need to be sure to alternate which direction the athlete is shuffling through the drill. This will allow athletes to develop great lateral speed when moving to the left and to the right. Athletes should take 30-40 seconds of rest between sets. 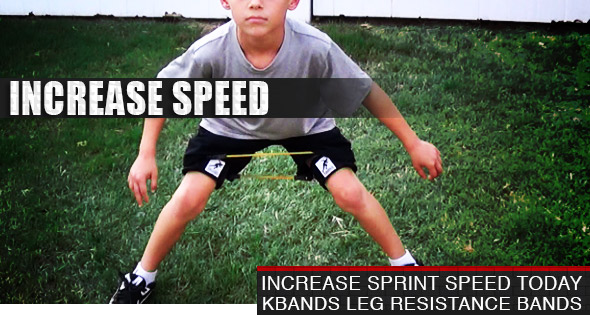 When performing this high knees exercise it is important to use proper technique. When athletes are moving laterally they need to make the movements as close to game like as possible. Just as in a game by not watching their feet and keeping their eyes up athletes will be able to practice good footwork and body control while focusing on objects located in front of them. Athletes should also maintain a 90 degree angle in their elbows and execute powerful arm swings throughout the kids football training. Powerful arm swings will push the athletes body into the ground forcing the body to activate more muscle fibers to counteract the amount of force being placed on the body. This forces more muscle activation, which in turn helps generate quicker and more powerful lateral steps. As athletes work around the single cone and prepare to receive the football from their partner it is important they take small, choppy steps as they round the Speed and Agility Cone. These short, choppy steps will allow athletes to maintain control of their bodies and quickly redirect their momentum. Athletes should be working off the balls of their feet throughout the kids football drill.