Successful basketball defense begins with sharp reflexes and close attention to an opponent’s moves. And in order to intercept the ball and control the direction of the game, defenders also need agility in the core and hip flexors. A basketball defensive speed drill like the one demonstrated in this video can put defensive players to the test, pushing the limits of all the elements required to retake control of the ball: strength, quickness, footwork, coordination, and concentration.

This drill can be worked into a regular basketball defense training program during the regular season, and after a few reps of the drill per session, basketball coaches and players will begin to see improvements in the speed and reflexes required to stay with an opponent during defensive maneuvering. With the additional tension of the Kbands applied to the upper legs and hip flexors, basketball players will gain strength and stability in the core, which will help build the lateral quickness necessary to respond to light speed changes on the field. This, in turn, will translate into strength and speed in every aspect of the game.

This basketball defensive speed drill requires very little equipment, just a set of Kbands resistance bands for each player, a ball, and a set of speed and agility cones, which are available for purchase on the Kbands Training.com website.

Beginners who execute this drill will need a course of cones about six to eight deep, meaning they’ll need several pairs of cones laid out in parallel rows and staggered, so players will move in a zig zag motion from the cones in one row to the corresponding cones on the other. More advanced players will need a double row of about eight to ten cones total, since their relative endurance and agility will be slightly higher.

Once the two parallel rows of cones are laid down, players can each attach a set of Kbands to their upper legs and then clip the resistance bands to the straps. Basketball players should also warm up before this drill in order to get the most out of the exercise.

As the start of this defensive speed drill, the defending player will take a position at the front of the double row of cones. The basketball coach or a partner will stand facing the player and holding the ball. At the starting signal, the player will move laterally from each cone to the next one in the opposing row, back and forth, in a backward motion down the line. When she reaches the last cone in the line while moving in this lateral shuffling motion, the coach will pass her the ball. She’ll grab the pass, break from the line, and move away down the court. This drill can be completed in eight to ten resisted sets followed by two to four unresisted sets, with a short pause between each set. 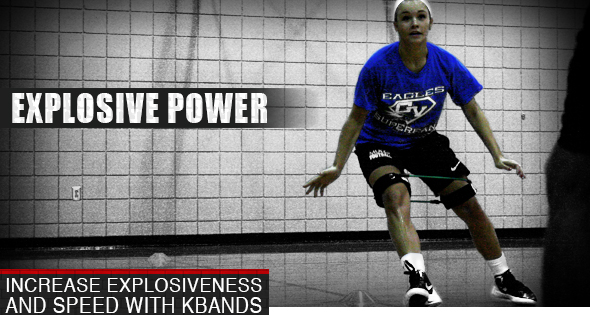 The major goal of this drill will be the development of lateral quickness, agility, hip strength and reflexes. But good technique will be necessary to reach these goals, and in the meantime, players will also need to focus on the ways in which this drill translates into successful defense during the game.

In this drill, proper technique starts with the feet. In the starting position, the feet should be shoulder width apart and pointe slightly outward for a stable base. The weight of the body should be placed squarely on the balls of the feet, or slightly forward, and the knees should be bent at a slight angle in place the body in an athletic stance. This position helps prepare the entire body for quick changes and bursts of explosive speed in any given direction.

At each change of direction, the hips will rotate and the hands will reverse their high-low position, but the player’s eyes and direction of focus will stay forward. While the body engages in explosive, controlled backward motion, the attention will stay focused on the partner/opposing player. AS the player moves down the line of cones, her feet should never click or collide. The keep this from happening, the knees should stay bent and flexible and the body’s center of gravity should stay low.

The breakaway move in which the player takes the pass at the last cone and sprints away down the court should be reserved for slightly more advanced players. In the beginning, players should concentrate only on lateral agility and the fundamentals of the drill. Later, linear speed can be worked into the process.

As mentioned above, this drill should begin with eight to ten resisted sets with the Kbands in place. Later, the bands can be removed and players can complete two to four more sets with no resistance. If this basketball defensive drill becomes a regular aspect of a defensive training session, players will start seeing strong improvements in reflexes, lateral speed and control over the momentum of the game.

For more basketball drills like this one that can help players build both defensive and offensive skills, players and coaches can explore the basketball section of Kbands Training.com. The site also offers information and purchasing details for powerful, lightweight resistance and suspension training equipment like the Kbands, KB Duo, and KB Powerbands. Visit the site or reach out to the Kbands trainers directly for more information and training resources.