The Kbands four cone shuffle pass drill is a great basketball passing drill that basketball coaches can work into any session of training focused on developing passing skills, quick reflexes, and strong agility. This drill requires players to stay on top of multiple areas of physical and mental focus, and the challenge of the drill will be elevated with the addition of the Kbands resistance bands. When the bands are in place, they create extra tension on the hip flexors, and this extra tension will build strength and add stability to the core while the player’s attention is focused on receiving and returning passes.

Basketball speed drills like these require very little equipment, just a set of Kbands for each player, a ball, and four agility cones (which can be purchased at Kbands Training.com). Players can attach the Kband straps to their upper legs and clip the resistance bands to the straps while coaches place the cones on the floor in a line about three to five feet apart.

Each of these basketball passing drills involves two sequences plus a modification. And for each of the sections of the drill, players will work through the set with a partner. So once players are paired up, the athlete running the drill can start the first sequence by taking a position behind one of the cones in the middle of the line. The player can start with the middle cone on the left.

For the first few passes in the drill, the partner and athlete should focus on the chest pass, which means staying between the two middle cones. The athlete should maintain a low, controlled center and fast feet between each of the two middle cones, and the partner should keep up a constant series of fast, regular passes at chest height. Each time the player receives a pass, she should focus on sending it back with speed, force, and accuracy from the mid-chest region of the upper body. 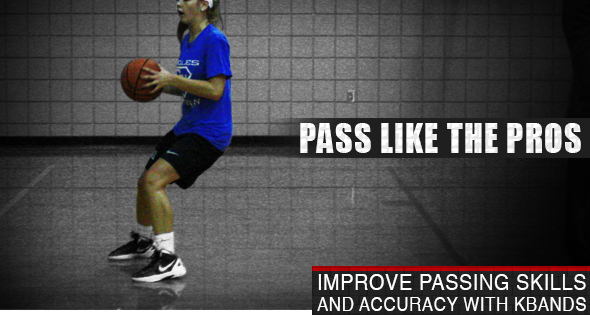 After a series of a few chest passes executed from the two middle cones, the player can start expanding the range of the drill and receiving passes at either end of the line. As the player runs to the last cone on the right or left side of the line, the partner will send a pass that the player will receive at chest height. Then the player will return the ball with a spin pass.

The spin pass can help the athlete get the ball around a defender by sending it toward the floor with a spinning motion that will make the ball change direction on the rebound. To execute this pass successfully, the athlete will take one step forward in the direction of the pass, and then send the ball into the floor with a strong upper body and an added push from the outside arm. Basketball passing drills like these give players a chance to practice the spinning motion and build both the force behind the pass and the accuracy of the throw.

As soon as the ball is returned, via spin or chest pass, the player will drop the shoulder, change direction, and run as quickly as possible to the next cone in the sequence. Successful passing depends on speed and quickness, and quickness begins in the hips and core. So athletes should use this drill to focus on direction changes and footwork as well as passing skill.

At each change of direction, athletes should stay mentally focused and ready to receive the next pass. The body should stay in constant motion and the player’s stance should stay stable, low, and under control.

After two sets starting from each of the two middle cones (four total), athletes can unclip the resistance bands from the Kbands straps and complete two more from each middle cone (four more total). When the resistance bands are removed, athletes will feel a sense of temporary lightness in the legs and hip flexors, and this light feeling can contribute to greater speed and better control of the body during stops, starts and direction changes. After the removal of the cones, each player should complete two more rounds of the drill, and then partners can switch positions.

This drill moves at high speed with high levels of intensity, and it focuses on both agility and passing skill at the same time. So incorporating these kinds of passing drills into a regular training program can generate fast results and rapidly improve team performance.

If you’re a basketball player or a coach and you’re ready to take your game to the next level, visit Kbands Training.com and explore the basketball section of the site for more basketball passing drills similar to this one. The site also offers additional detail and purchasing information for the Kbands resistance bands and other simple, lightweight, portable training equipment like the KB Powerbands and KB Duo.