As the pitcher stands on the mound and assesses the game situation, there are two different types of pitches he can choose to execute depending on the state of the field, the player at bat, and the number of runners on base. These include the stretch and the wind up.

The first pitching option is the stretch. This move is usually executed when there is runners on base so the pitcher can deliver the ball to the catcher so the catcher can quickly take out a base runner. The stretch is a slower pitch that requires balance and forward momentum, and the stretch mechanics are discussed in a separate video tutorial in the baseball training section of KbandsTraining.com.

The second pitching option is the wind-up, a standard pitching motion that places a high velocity behind the ball. The wind up requires control, balance, and a complete motion in the lower body and throwing arm, rather than the abbreviated motion of the stretch. In this video, baseball trainer Matt Johnson will take viewers—including both pitchers and coaches at the adult and youth levels—through a complete explanation of the mechanics behind the wind up.

Too often, pitchers undermine the velocity behind the throw and compromise proper technique during the wind up by allowing the lower body to move forward to far and too quickly. When the hip moves forward ahead of the arm motion, the wind up doesn’t carry the power that it should, and the body loses some of the control and force that would otherwise align behind the ball.

So as the pitcher adopts an initial stance, the rear foot should step back, not sideways. Prior to the wind up, the feet should be planted in a linear position, and should stay north-south relative to the position of the catcher.

As the arms and upper body move into proper wind up position, the rear foot should turn, and then the knee should rise up until the upper leg is parallel to the ground. Most experts would consider this lift to be the most important part of the mechanics of the wind up. During this move, balance is essential to success.

As the knee comes down, this should happen in a straight motion. As the leg comes down and the pitcher kicks out, the body should stay tall on the back side. The straight line from foot to hip to shoulder should not collapse or waver as the front foot plants and the throw begins. Too often, pitchers tend to collapse on the back side, which means they struggle to explode through the move with the weight of the body planted on the ball of the foot. As they explode through this motion, pitchers should use the slope of the mound to generate force behind the throw.

At this point in the move, pitchers can shift their attention to the feet. The front foot should come down to the ground as mentioned above, with the ball of the foot landing soft on the ground. Pitchers can envision the toes moving forward through the front of the shoe. At this point, the ball will come up over the top of the body, the back leg will rise in a high exaggerated motion, and the pitcher will pull at the hamstring of the front, planted leg.

As the hamstring is pulled, the knee will be taken backwards. Many pitchers make an error at this point as they bend and the knee and glide forward. Instead, they should pull back as they pop up over the front side. 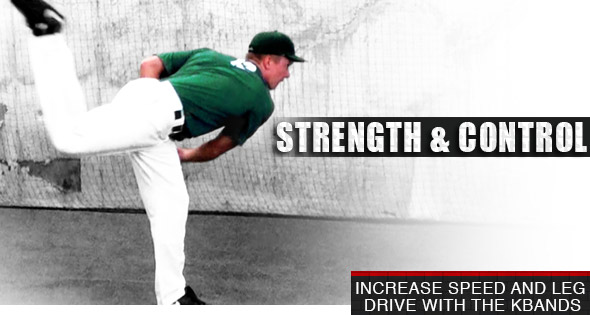 Prior to the forward motion of the arm and the release of the ball, the shoulders should be an area of concentration. They should be level, tall, not hunched and not bowed backwards. As the pitcher pulls up over the top of the front side, the hand holding the ball should move forward as far as possible. If this is executed correctly, the pitcher will feel a strong stretch in the muscles of the shoulder blade and the upper back behind the pitching arm. Pitchers should keep in mind that a strong forward reach will create a downward tilt to the ball. Coupled with high velocity and tight control, this downward tilt will make the pitch very difficult for the batter to hit.

Both the wind up and the stretch will play an important role in pitching execution and the success of the game at both beginner and advanced levels. Fast accurate pitching, regardless of the pitcher’s intention, starts with control, balance, coordination, and excellent body mechanics during each phase. When the body weight is properly placed and no joint is over or under extended, the force of the pitch can begin in the lower body and core and move unimpeded through the upper body and down the arm.

For more pitching tutorials like this one, and for a complete library of exercises and drills that can help reinforce the lessons of these tutorial videos, players and coaches can visit the baseball training section of KbandsTraining.com. The site offers guidelines and drills presented by experienced pitching experts and demonstrated by advanced players. Coaches and players can also find a wide range of supplemental materials and training equipment for a variety of sports, including training cones, ladders, and the full collection of Kbands resistance and suspension equipment.