During a typical game, there are two methods that pitchers can use to deliver the ball across the plate. One is the standard wind up, and the other method is known as the stretch. The stretch can be used to throw the ball straight to the catcher when there are runners on base, so the catcher can throw the ball to the base and take the runners out. But just as often, the stretch is engaged because pitchers struggle to maintain balance coming out of the wind up.  In either case, the stretch has a distinct place in the game, and strong pitchers can transition easily into this move when the time is right.

In this video, trainer and baseball pitching expert Matt Johnson takes viewers through the basic mechanics of the stretch in a step by step demonstration. Baseball players and coaches can use this tutorial to learn more about pitching from the stretch and maintaining proper technique in every phase of the move.

Baseball Pitching: Pitching from the Stretch

The most important part of the stretch takes place at the beginning of the move and lies in the set of the hands. The hands can begin at any level, but as the knee of the front leg begins to rise, the hands will need to rise in a parallel motion. Players should envision a string connecting the elevated knee and the hands in a set position.

In this early stage, the posture of the back is also critical to success. The shoulders should be straight, but the back should not be arched. The body should also not be hunched forward over the elevated knee.

As the arms explode into the stretch and the lower body drives the motion, pitchers should make sure that the front foot is planted before the hips move forward. To gain a sense of the correct motion, players can watch this section of the video carefully. If the hips move forward too early, the trajectory of the ball will rise up in the zone and the pitcher will experience less accuracy in the release. Players should stay tall, push through the lower half of the body, and create strong arm motion as they release toward the plate.

As the front foot lands, players should concentrate on keeping the landing soft and centered on the ball of the foot. It can help to envision pushing the toes through the front of the shoe. While this is happening, the forward knee should not be bending forward. If the knee bend is limited, more power and velocity will concentrate in the hips. Popping the knee back like this will also generate a high, exaggerated motion in the back leg as it lifts from the ground and swings forward, following the motion of the hips. 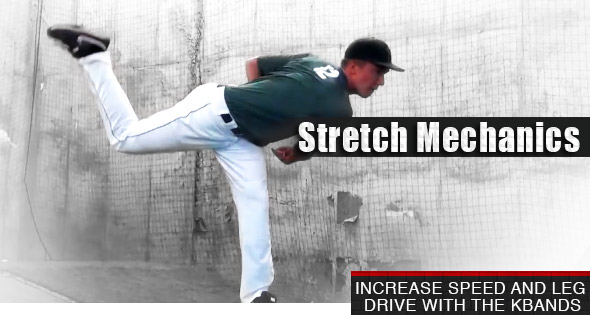 The arm motion involved in the stretch will begin with the set, as described above. Then the arms will rise up into full C’s. As players go through the leg kicking motion in the lower half of the body, they will also want to pull the glove in tight toward the body and reach out as far as possible with the ball releasing hand. This will create a strong release point and good strong velocity through the pitch.

Aside from the full leg kick motion that can occur when there’s nobody on base or a runner on third, the stretch involves three different types of slide step motions.

As demonstrated in the video, this fast delivery will take place earlier than the runners might expect, which will enhance the deception factor. This move delivers the ball to the catcher in a quick way that can allow the play to continue, the catcher to send the ball to the base, and the runners to be tagged out. The pitch will lack velocity, but in this case, the goal is focused on the base runners, not on the swing.

Pitching From the Stretch: Final Notes

Velocity and accuracy lie at the heart of strong pitching, but experienced pitchers and coaches know that great pitching requires a diverse range of skills, including adjusting the qualities of the pitch to meet the needs of the game and accommodate shifting circumstances on the field. Strong pitchers are versatile, and the slide step is a perfect demonstration of the type of versatility that can generate the highest number of outs.

For more pitching tutorials and other videos that emphasize different aspects of the game, including running, catching and hitting, players can visit the baseball training section of Kbands Training.com.