Increase Throwing Velocity with These Pitcher and Quarterback Workouts

Increase Throwing Velocity with These Pitcher and Quarterback Workouts

Every now and then on the blog, we’ll receive a comment from a pitcher, quarterback or otherwise position-specific athlete looking for tips on how to improve one very specific type of body motion. Earlier this week I was approached by a pitcher who wanted to know something I’m sure every pitcher wonders: what could he do to increase his pitching speed?

Almost every pitcher has some subtle issue of body mechanics that holds him or her back from greater speed. As experienced pitchers know, pitching strength isn’t about the arm alone. The speed of a pitch comes largely from the hips and core. The force that drives the ball begins in the leg, moves up the body, and only after gathering strength in the core and hips does it deliver the ball from the arm. To that end, I’ll use today’s video to demonstrate moves that can build throwing power in the core and hips. If you’re a pitcher or quarterback and you struggle with these exercises, practice with the video over and over until your increased core strength starts to show in your throwing velocity.

For this first exercise, strap your Kbands securely around your legs in order to optimize the resistance you’ll be feeling in your hips and glutes. Now drop one leg behind the other. Shift your weight to the front leg, raise the back leg, and drive your raised knee forward. If you’re a pitcher, you should feel the resemblance between this leg motion and the motion that happens as you throw the ball. As you close the gap between your knee and your chest, you should feel a strong squeeze in your obliques.

Complete this pitcher-quarterback move in high-energy bursts for 30 seconds on each side. You can keep a continuous pace throughout the move, or you can try 3 second isometric holds at the top of the move when your knee is fully raised. 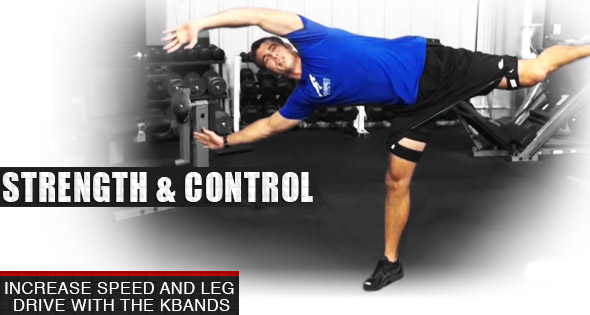 This pitcher and quarterback move will require plenty of floor space, so clear away a large area. Drop to the floor in push-up position and then bend your right knee so your toe is planted up near your side. Complete a push-up in this crooked position, then hop your body to the left and repeat the move with the bend in your other leg.

Each time you hop your body from one side to the other, stay as flat and low to the ground as possible. This will maximize the resistance in both your upper and lower body, which can help if you’re a pitcher or quarterback trying to build hip and leg strength. Do about ten of these per set.

The final pitcher-quarterback move in this set is a simple balance exercise that opens the chest and concentrates resistance in the core. Stand up straight, then lift your left leg and extend it to your side with your knee straight. As you do so, raise your arms over your head and lean your torso to the right. Your body should form a T-shape. Hold this position for several seconds, feeling the pressure in your core and hips. Balance is the primary challenge of this move, but the better you’re able to balance, the more strength you’ll build in your core and the faster you’ll throw as a pitcher or quarterback. Keep your eyes on one area of the floor if it helps. Complete eight of these moves on each side.

Again, if you’re a pitcher or quarterback and these moves don’t come naturally to you, refer to this video and work through these sets over and over until they become more comfortable. You’ll see the results in your throwing speed and body control on the field.

As always, if you have questions or need additional guidance, just leave a message in the comment section below. Enjoy the workout!