On the surface, the act of running seems simple and comes naturally to most people soon after they learn to walk. But as serious track and field athletes (and coaches) know, the running stride is a complex movement that can be broken down into several components, each of which plays a vital role in the generation of explosive speed. One of the most important motions in the stride, especially for sprinters, is known as the dig phase.

The shorter the sprinting distance, the more the race can be won or lost in the first few fractions of a second off the starting block. For longer distances, a weak or unsteady start can be recovered over time, but in a quick sprint, everything depends on the body’s ability to transition from stillness to maximum speed within the first two or three strides. This depends on the success of the dig phase, the point at which the foot comes down to grip the ground and propel the body forward (or the earth backward, depending on your point of view.)

This track and field drill, called the KB Duo Resisted Runner, can help track athletes focus on the dig phase and build condition in the muscles and joint movements that lead to more efficient energy expenditure. This drill drags the body backward, letting the runner focus on the act of planting the foot and pushing the center of gravity forward into flight.

Resistance Running with the KB Duo: Setting up the Drill

This drill requires nothing but a stretch of about 20 meters of track, a partner, and a KB Duo for each partner pair. The runner can add the extension strap to the Duo and then wrap it around his waist, handing the handle at each end over to the partner, who will stand behind the runner with a handle in each hand as the drill begins.

When the starting signal is given, the runner will lunge forward into a full sprint, and the partner will hang back, following the runner down the track, but resisting his momentum all the while. Watch the video for the precise body angles that will generate the most resistance and thus add more value to the drill.

Resistance Running With the KB Duo: Executing the Drill

As the track and field athlete in front drives forward into the sprint, his body should come as close as possible to a 45 degree angle with the ground. The farther forward he leans, the more the pressure of the dig phase will concentrate in his hip flexors, legs and core. If he attains the best possible angle, he’ll be able to resist the drag created by the partner in a way that allows him to rely on the muscles and movements of his natural running form. If the chest is too high, the athlete will move out of his natural form and the drill won’t be as effective.

For the partner following the athlete, body position and angle will also be important. If the partner leans back too far and provides too much resistance, the athlete’s natural running form will be disrupted, and he won’t be able to focus fully on the knee drive and the dig phase. But on the other hand, if the partner’s body position is too upright, the level of resistance won’t be strong enough and the benefits of the drill won’t materialize as quickly.

Ideally, the balance between the front athlete and the following partner should resemble the balance in the video. The athlete should be working hard, and his knees should approach his chest at each stride. But his strides and his arm motions should not be wide, flailing, imbalanced or unnatural. 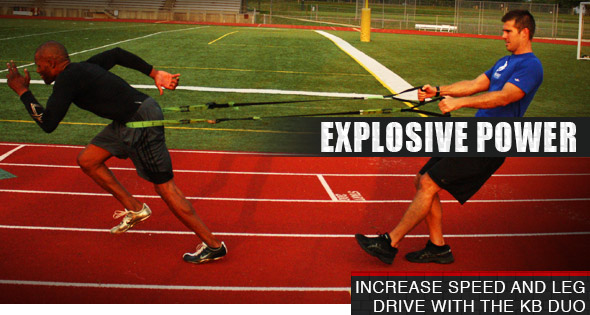 Resisted Running With the KB Duo: Sets and Reps

The KB Duo resistance runners should be completed in sets of about six to eight. In each rep, the athlete and partner should drive through about 20 meters of track. Because this drill emphasizes explosive action, not endurance, each rep should involve a complete investment of energy and should be followed by a long, generous rest period. About a minute and a half to two full minutes of rest should take place between each rep.

Athletes and coaches should keep in mind that the start is the most important part of any short burst sprint exercise. So it’s very important that the resistance is applied from the first second of the 20 meter run. From the moment the starting signal is given, runners should experience backward drag and should concentrate heavily on driving the foot into the ground for the dig phase, then lifting the foot at the end of the cycle and driving the knee toward the chest. Maximum explosivity balanced with control over technique, running form, and execution of the stride will be critical to success with this drill.

The KB Duo can be a valuable resource in the weight room, but it also has dozens of uses and applications on the training field, especially for track and running-dependent sports with a strong focus on balance and core strength. Both the Kbands and the KB Duo can be applied strategically to various moves that improve with the addition of artificial resistance. Of course, every resistance-based drill will bring better and faster results if athletes warm up and stretch first and pay close attention to technique throughout the exercise.