Kbands Track and Field Bounding Starts: Increase Your Speed on the Track

Most track and field athletes and coaches recognize that speed comes from two primary sources: powerful conditioning in the core and hip flexors, and a well-positioned start. But the equation of speed is highly complex, and there are thousands of elements that factor into both strength development and starting position, some of which are easier to control than others.

As coaches and athletes, the primary goal is clear: winning races. And in order to accomplish this goal, it’s important to control as many of these factors as possible. Runners need to focus on strength training, stretching, conditioning, rest periods, and balanced development of the upper and lower body. And coaches need to carefully observe technique during the run as well as body position at the starting lineup, so they can correct errors and give runners every advantage.

This set of speed training drills, called Kbands bounding starts, can help with both. These drills are designed to target the muscle groups responsible for stride length and explosive motion. And they’re also designed to help players maximize their body position at the start. Coaches and players can follow the pointers demonstrated in this session and work this set of bounding starts into any track and field conditioning program. This track and field bounding drill is broken down into three components: the starting set up in the blocks, the breakout from the starting line, and the bounding stride to the ten meter mark.

Before the drill begins, players will need to prepare by attaching the Kbands straps their upper legs with the label in the front and the metal rings on the outside. They can then clip the resistance bands to the metal rings with the short band in back and the longer band in front. While they do this, coaches can set up the starting block.

Track and Field Bounding Starts: Setting up at the Block

Athletes and coaches can carefully observe the trainer in the video to maximize position at the starting line. As the runner sets his foot on the block, he makes sure that his shoulders are not too far in front of his hands. His lower hand is almost aligned with his shoulder, and his back hand extends behind him, but not too far from his shoulders and body line. In the meantime, his spine and body stay centered and balanced, not leaning too far forward or back.

The athlete’s shins are also an important part of his starting position. The shins should be aligned almost parallel to one another, so when the drive phase begins, both legs contribute to a burst of explosive forward motion. The shins are not exactly aligned, but their angles don’t vary widely, and neither shin is too far above or below the other.

As the starting signal takes place and the runner leaves the block, he drives forward with both legs and ultizes his arms, bringing the back arm forward in an explosive forward stride that takes the hand all the way to his face. The other arm can relax and fall behind the body line as the stride moves forward, but at the next bound, that arm will drive forward as well as the body establishes a rhythm.
The back leg will drive forward and pull the body forward in sync with the back arm. As this happens, runners will feel the resistance of the Kbands pulling against the hip flexors, the quads, and the muscles of the core. These are the muscle groups that are most essential to the bounding motion. With a truly explosive start, runners will feel strong tension in these areas, and they can use this resistance to generate a higher level of force and power when the bands are removed later on. 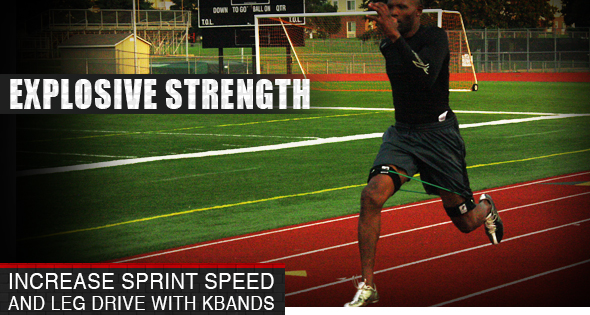 Track and Field Bounding Starts: Moving Forward Down the Track

As the spine straightens and the body adopts a more natural, upright position, the runner will establish a stride rhythm that will ideally pull the legs and hips as strongly as possible against the resistance of the bands. This drill involves a bounding motion rather than a straightforward run, which means each stride should be exaggerated to stretch and open up the legs and hip flexors. Athletes should lunge through each stride and push hard against the ground, keeping each bound as long and wide as possible. Like the runner in the video, athletes should be working against the tension of the bands at every step. As always, the arms should stay engaged and the spine should stay aligned, but runners should focus less on foot speed and more on generating force and explosive energy in the hips and core.

Track and field athletes at all levels can benefit from this drill, and each session should start with six to eight resisted sets. With the Kbands in place, runners should tackle six to eight sprints of ten meters or more. Athletes should Include short breaks between each set so they can invest maximum energy in each round.

After completing the resisted sets, runners can unclip the resistance bands from the Kbands straps and set them aside. They can then complete two more sets of full length bounding sprints with no resistance in place. A short term neurological sensation of extreme lightness during the unresisted sets can help runners maximize stride length, but be careful not to compromise technique during these final sets. Runners should keep the arms engaged and keep each bound as exaggerated as possible.

For more track and field drills like this one, as well as warm up exercises and conditioning drills that can help increase both endurance and speed, coaches and runners can explore the track and field section of the KbandsTraining.com website. The site also offers more detail and purchasing information for the Kbands and other resistance training equipment including the KB Powerbands and the KB Duo.