Speed training requires strength development in the core muscle groups that lift the legs and drive the body. But a successful speed training program also demands the stability, balance, and mental agility that are necessary for rapid direction changes. It’s one thing to train an athlete to complete a known course or run predetermined sprints during a cone drill, but it’s another to build the reflexes and situational awareness that translate to light speed reactions on the field.

How to Get Faster: The 4 Cone Drill Workout

This 4 cone drill speed training workout can help athletes fine tune the sharp cuts and total body direction changes that keep them light on their feet during intense game shifts. In the video below, the Kbands trainers demonstrate how a simple series of motions can build power in the core and hip flexors while also sharpening reaction times.

The speed training drill will bring stronger and faster results if used in conjunction with the Kbands resistance bands, which make both quick motion and quick reaction times more difficult. The exercise will also require two people, one to run the course and the other to call the directions and keep time. Coaches can run this drill with their teams, or partner athletes can pair up and reverse rolls between sets.

How to Get Faster: Setting Up the 4 Cone Drill

Start the 4 cone drill by placing four orange training cones in a square pattern approximately eight to ten yards apart. (These cones can now be purchased through Kbands Training.com; see the site for details.) Before running the first two resisted sets, the athlete should make sure the Kband straps have been secured around the upper legs with the longer band attaching the legs in the front and the shorter band clipped to the back. The athlete should begin the drill by standing at the center of the pattern of cones.

Each direction change should be explosive and instantaneous. When completed correctly, the 4 cone speed training drill should be exhausting, so each of the four sets in the drill should not continue for more than about 20 seconds. Both athletes and coaches should keep in mind that this speed training workout is designed to develop agility, quick reflexes and sharp reactions times, not endurance. So the drills should be short and the rest periods between each set should be long-- at least one full minute to a minute and thirty seconds. 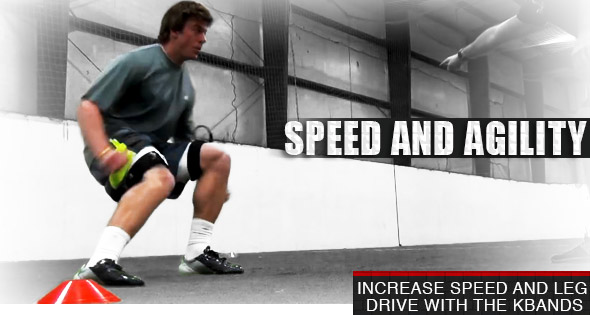 How to get Faster: Resisted and Unresisted Speed Training

The entire speed training drill should involve two resisted sets with the Kbands in place, followed by two unresisted sets in which the resistance bands are unclipped from the straps and the legs are allowed to move freely. Each of the two versions will come with its own set of challenges. During the resisted sets, athletes will need to work hard against the bands, keeping the knees high and the body squared in the direction of motion. The temptation will be to cut corners and allow the body to angle into a sprint and the range of motion in the knees to close down.

Athletes should fight against this temptation, and if they’re successful, the second two unresisted sets will involve an unnatural sensation of lightness. Once the bands are off, the body will feel feather-light for approximately three to five minutes. Athletes should use this feeling of lightness to stay fast and keep the square lines of the body even sharper. Between the first two sets and the second two, athletes should see a clear increase in speed and body control.

As with most speed training and sprint drills, the value of the move will be increased if athletes keep the head down and forward during the sprints and the arms fully engaged throughout the entire exercise. Fast arms during drills will lead to faster hip flexors and a stronger core on the field. Athletes should also keep in mind that explosive body motion and controlled agility always begin in the core. Visualizing the core as the source of strength and stability will help runners stay low to the ground and anticipate the changes that lie ahead.

How to Get Faster: Coaching Tips

Since technique and body position are vital to this speed training drill, the coach role will involve more than just calling out direction changes. As the athletes move, the coaches should keep a close eye out for low explosivity and limited range of motion in the arms and knees, and they should help athletes keep the chest aligned with the direction of motion. Coaches should encourage athletes as they run and make sure they’re gaining maximum benefits from the drill.

For more video speed training drills like this one, and for more information about the Kbands resistance training equipment, explore the Kbands Training.com website. The site offers resistance and suspension training guides and tips that can help users get the most out of the Kbands, KB Powerbands and KB Duo. Athletes and coaches can also explore the sports-specific articles on the site that cover everything from skill development to stretching, nutrition, and hydration.