One of the most important aspects of speed training is a focus on the 40 yard dash. Training at this distance provides the benefits of quick agility and explosive bursts of speed, but running a 40 also begins to push beyond a single explosive motion and tax the heart and lungs as well as the core and hip flexors. As an athlete’s 40 yard dash time improves, training benefits begin to compound, and both strength and speed begin to increase.

Athletes who train to run and are looking for exercises to increase speed can follow along with the speed workout drills demonstrated in the video below. In the video, the Kbands trainers show how adding the resistance of the Kbands to an explosive 40 yard dash can improve times and build power in the muscle groups that put the body in motion and keep it at top speed for a full 40 yards.

Running a 40: Setting Up

Before this 40 yard dash training set begins, athletes will need to attach the Kbands properly. The straps should be snug around the upper legs just above the knee with the label facing forward and the metal rings on the outside. Then athletes can choose an appropriate level of resistance and attach the corresponding colored bands to the metal rings, making sure that the longer band is attached in front and the shorter band is clipped to the rings on the back of the legs.

This 40 yard dash exercise can be completed on a marked field so the distances are clear, or the athlete can simply place a pair of orange training cones at the starting line and another set 40 yards away. The entire 40 yard dash training sequence will involve 6 to 8 resisted sets with the bands in place, followed by 4 to 6 unresisted sets with the bands unclipped from the metal rings so the legs can move freely.

Running a 40: Body Position at the Start

The athlete’s body position at the starting line will have a crucial impact on 40 yard dash time, so athletes and coaches should watch the video closely to fully understand the interaction between body line, hand position, and foot placement.

First, the athlete should stand with his feet directly on the starting line. Then the left foot should move back just past the ankle bone of the right foot. Then the right foot should be placed four to six inches behind the left. Holding that foot position, the athlete should bend at the knees and drop to the ground, so the right knee is nearly touching the ground and the left knee is pointed in the direction of the run.

The right hand should be placed on the starting line to balance the body as the hips come off the ground to prepare for the run. And as the hips lift, the center of gravity will rise and move forward, so the left hand should be planted on the ground a few inches forward of the line. This arm will absorb the forward shifting weight of the body and help load the energy in the hips that will drive the body into action.

When both arms are planted properly, the athlete can raise the hips, which will straighten the back and bring it parallel with the ground. Note in the video that the shin is also parallel to the ground. If the shin stays low, more of the explosive energy of the body will be concentrated in the hips before the motion begins.

Finally, just before the starting signal, the athlete can raise the left arm up and bring the elbow up past the line of the line of the torso. As the 40 yard dash begins, this arm will swing forward, driving the momentum of the body toward the finish line. 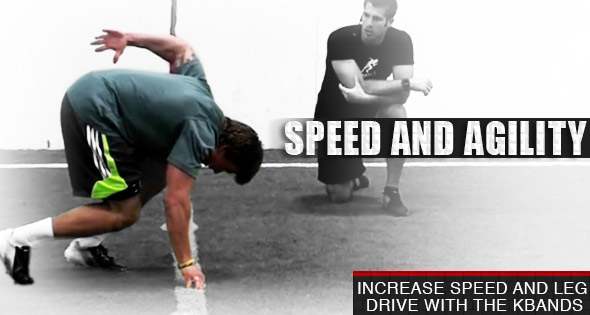 Running a 40: The First Few Steps

As the body leaves the starting line, the left swing down and drive the body forward, the hips will blast forward, and the running motion will begin. But during the first few steps, sometimes called the dig phase, the athlete isn’t yet fully upright. Athletes should take advantage of this early, explosive period of the run. During this first burst of speed, the chin should stay down and the head should lead the body forward. There’s no need to rush past this early phase and gain full height right away—in fact, the longer this dig phase lasts, the more ground will be gained at the beginning of the run.

Athletes often feel the need to look in the direction of motion, but during the dig phase, there’s no need to do this. During a 40 yard dash, athletes know where the finish line is and the run is expected to be straight. And if the head comes up too soon, the chest will follow, and forward motion becomes more inefficient when the chest leads the body. So coaches should encourage athletes to keep the chin down and the head forward until the run is well underway. This will keep the power where it needs to be, which is in the hips.

After 6 to 8 resisted 40 dash sets, athletes can unclip the Kbands and experience the neurological and physiological sensations that create a feeling of extreme lightness and speed. But the goal during the unresisted sets will be to look past this sensation of lightness and concentrate on keeping the power in the hips and the head forward.

To experience the training benefits of the Kbands and other kinetic training equipment including the KB Duo and KB Powerbands, visit Kbands Training.com. Explore the site to learn more about the biomechanical principles behind resistance and suspension training workouts. Visitors can also feel free to reach out to the Kbands trainers directly or leave a comment on the site for training tips, purchasing information and answers to specific questions.