In any well-played soccer game, the process of finishing will play a crucial role in the attack strategy of the wining team. The finish describes the final approach to the last line of defenders, the athlete’s navigation around the line, and the final shot on goal. This can be the most intense moment of any game, and the players that are best poised for success are those with strong ball handling skills, quick reflexes, and the ability to maintain speed during rapid direction changes.

This soccer shooting drill, called the ISS 1 vs 1 drill, can help players bring the ball to the final line of defenders while moving rapidly from left to right. At the last moment, the player will dodge around the line, line up the goal, take the shot, and start over from the beginning. This drill can be a regular part of any offensive soccer training program. Teams that work these moves into their sessions a few times a week will see rapid improvements in coordination, speed, strategy, and scoring abilities.

With the added challenge of the Kbands resistance bands, skills will increase even faster, since players will build rapid strength and conditioning in the hip and core muscles that contribute to speed and agility on the field. The bands place tension on the hip flexors and abductor muscles that fire as players execute sprints and lateral moves, and when the bands come off, these moves feel faster and lighter.

Soccer Shooting Drill: Setting Up the ISS 1 vs 1

This drill is very easy to set up and requires minimal equipment—just a ball and a set of Kbands for each participant, as well as a line of five speed and agility cones and a goal. The cones will represent the final line of defenders, so players can set them up in the position they typically use to take shots at the goal. This may be inside the box, or it may be at the eighteen yardline. Players can begin the drill as far back from the cones as they choose—if speed is the goal, the starting point can be many yards away from the cones. If ball control is more important, players can start closer. In all cases, the drill will begin with resisted sets, so the Kbands should be attached in place around the upper legs. 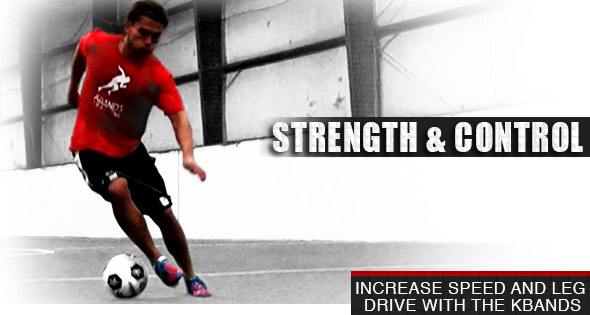 The first phase of this drill will involve an in-and-out motion toward the final line. Players can begin at the starting point and then take the ball rapidly toward the line of cones while shifting the position of the ball from the left side of the line to the right. At each step toward the cones, the player can move the ball forward at a 45 degree angle from one side to the other. At the line, the athlete will send the ball around the cones at a 45 and then line up the shot at the goal.

As always when lining up a goal shot, the player’s chest should be slightly forward over the ball, not leaning back. The shot should be aimed at the distant post. And players should line up the shot carefully before delivering the ball by aiming the plant leg toward the intended target. This first phase should involve an equal number of resisted sets from both the left side and the right side of the goal.

The second phase of the drill will involve a step-over. Players and coaches can watch the video carefully to see how the athlete brings his foot over and around the ball before changing the direction of motion in front of the defending line. This step-over motion happens fast, but the player stays under control and continues to drive the ball forward and around the line toward the right or left of the goal.

The final phase of the drill involves a scissor motion, in which the player swings the right foot around the ball followed by an identical motion with the left foot. Like the soccer player in the video, athletes should execute this move in a way that’s controlled, confident, and fast. This move can be tricky and can require a degree of balance and coordination, and the added tension of the Kbands will increase the difficulty during the resisted sets.

As with the previous two phases of the drill, soccer players should execute the scissor motion in about three or four reps on the left and right side of the goal equally, focusing on speed and technique during every rep and working to drive the hips and knees against the resistance of the bands.

After all three phases are complete, players can unclip the bands from the Kbands straps and repeat each move of the drill two or three times with no additional tension. During these final reps, athletes should make note of the temporary feeling of extreme speed and lightness that take place for a period of time after the bands are removed.

The final approach to the last line of defense may be one of the most important moves in the entire game, and if players have the speed, agility and control to execute this approach perfectly, their offensive line will be very difficult for opposing teams to overcome.

For more soccer drills like this one, and for dozens of others that target specific aspects of the game like passing, shooting, taking control of the ball, juggling, and defensive maneuvering, visit the soccer training section of Kbands.com. These drills are demonstrated by top-level athletes and soccer training experts, and they involve very little equipment. With a few simple moves and the support of the Kbands training gear, any team can start building the skills they need to take control of the field and elevate their game to the next level. Explore the Kbands website and start building sports specific skills for athletes of all ages and experience levels.