The touch-and-go approach is fundamental to effective offense on the soccer field. Players with light feet, quick reflexes, and excellent soccer conditioning skills are better able to maneuver the ball without breaking stride, and well-executed breakaway attacks help offensive players access and control the goal area.

To build the responsiveness and explosivity behind a successful breakaway attack, players need strong soccer conditioning workouts and soccer drills that build power in the core while demanding accuracy and situational awareness. Players need to move fast but still make controlled contact with the ball, both of which require agility and a stable base.

In the video below, the Kbands trainers take viewers through a series of soccer conditioning sets that help players focus on both speed and ball control at the same time. These soccer drills help with reflex development and coordination, but because they rely on the added resistance of the Kbands, they also build power in the core, glutes, and hip flexors, the muscle groups responsible for speed and rapid, controlled direction changes.

Players and coaches can use these soccer drills to develop breakaway skills and drive up the score. Touch-and-go attacks are vital to a strong offense, and with the added strength benefits provided by the Kbands resistance training equipment, soccer conditioning sets like these build power and elevate the game on multiple fronts. This set of soccer drills actually functions as two sets in one, and if added to a regular training program, it can increase a team’s control over the field and take an offensive strategy to the next level.

This soccer conditioning set will require a soccer ball, a set of Kbands resistance bands for every player executing the drill, and six training cones.

Two cones should be placed side by side at the starting point where the player will begin the drill. Eight yards in front of these two, another cone should be placed, followed by a fourth approximately three yards from the third. The player will continue sprinting another eight yards from the fourth cone to the fifth. At the fifth cone, he’ll change direction and turn to the right, where he’ll reach the final cone eight yards away. From the starting point to the finish, the cone layout should resemble an L shape.

Before beginning the soccer drills, the player should attach the Kbands straps securely to the upper legs, making sure the label faces forward and the metal rings are on the outside. Then the resistance bands should be clipped to the metal rings, with the long band attached in front and the shorter band in the back. When ready, the player running the drill should take a position at the starting cones, while a partner, coach, or second player stands inside the L shape holding the ball.

At the starting signal, the soccer player will sprint the eight yard stretch to the first cone. At that point, the partner will roll or pass the ball to the runner, who will tap it back within the three yard distance to the next cone. The partner must be fast with the pass, since the runner will need to pass the ball back without slowing down. After covering the three yard gap, the player will encounter the next cone, round the corner at high speed, then head down the final stretch to the last cone in the series. As he passes the final cone, the partner will pass the ball in his direction, and he’ll accept the pass and continue running in possession of the ball.

These touch and go soccer drills are straightforward in set-up, but will actually be very challenging in execution. The difficulty will lie in maintaining speed while accepting and returning the ball within the three yard window between the second and third cone. The player will need to stay fast and explosive while completing the first touch and go, then rounding the corner, then accepting the pass at the final cone. Soccer players will need focus, speed and proper technique to get the most out of this soccer conditioning exercise. 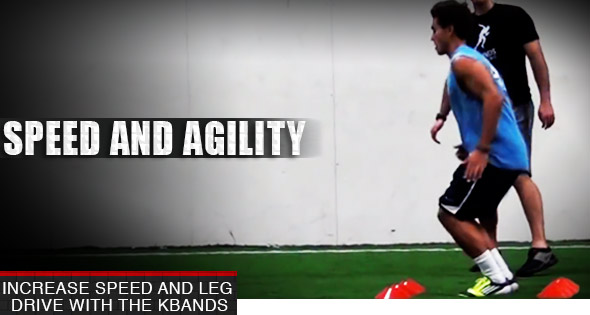 As the player completes the sprints between each cone and the next, the pressure applied by the bands will cause the stride to shorten and will draw the knees toward the ground. The soccer player will work hard to counter the resistance of the Kbands and keep the knees high. The knees should drive upward against the bands at every stride, and the arms should stay engaged as well. This may be especially difficult as the player rounds the cone at the corner of the L shape. At this direction change, players will need to think actively about arm engagement, control, and stability.

During the entire soccer conditioning drill, players must work to control stride length and engagement in the knees and arms, instead of handing control over to the bands. When these soccer drills are executed properly, the hip flexors are firing and strong burn is generated in the upper legs, hips, and core. Soccer drills like these can be exhausting after a few sets, so between each drill players should rest for a full minute before returning to the starting point. Resisted sets should be followed by at least one set with the bands unclipped so players can experience the sensation of extreme lightness that lasts for a few minutes after the resistance has been removed.

As always, the Kbands trainers can be reached through Kbands Training.com and are available to answer any questions coaches and players may have about soccer conditioning, soccer drills, offensive strategy, and the touch-and-go breakaway attack. Players can also explore the site to learn more about the resistance and suspension training benefits of the Kbands, the KB Powerbands, and the KB Duo. Adding targeted resistance to focused training sets can help players elevate their game while generating coordination, strength, and stability.