In order to dive forward and take control of a loose ball, lacrosse players need to develop a strong sense of agility. In this case, that agility has to come in the form of balanced forward motion that’s controlled, but also fast enough to take the ball from approaching competitors. The explosive beginning of the motion, the controlled stop, and the fast lateral escape or back pedal all need to be perfectly coordinated in order for lacrosse players to take possession of the ball and control of the field.

This series of lacrosse speed training drills can help players develop the strength and condition they need in the core and hip flexors in order to execute this type of motion. Lacrosse workouts often involve explosive forward motion directly toward another player or agility cone, and these lacrosse speed training drills are no exception. The drill requires minimal equipment and can be set up in just a few minutes.

This drill will require six agility cones (available for purchase at KbandsTraining.com). The cones should be placed in the field in the form of two large boxes. Each of the cones should be roughly ten yards away from its closest neighbors, since players will need plenty of space to develop their linear speed. Players will also need one set of Kbands each, which they can strap on before the drill begins.

This drill can be conducted in pairs or in large groups. At the start of the drill, two players will stand at the farthest corners of the first box, which means they will each be ten yards away from a cone placed between them. Coaches and players can consider this a defensive and offensive position, or they can simply pair up and focus on explosiveness and agility. 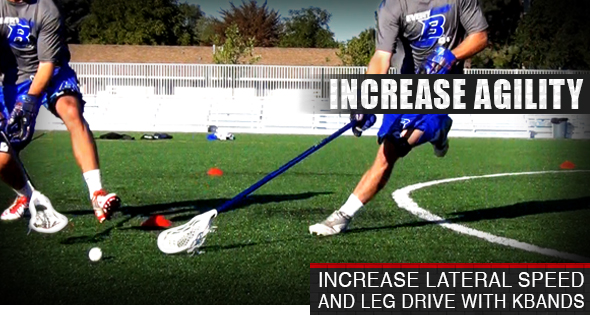 Players and lacrosse coaches can follow along with the video and watch as the two players run forward toward the center cone. At the starting signal, both will converge on the cone at the same time, and then quickly backpedal toward their starting positions. As they reach their original cones, both players will change direction and sprint toward the fourth cone, which is placed equidistant from the players and ten yards from the center cone.

The ball will be waiting at this fourth cone, so as the players converge on this destination, they’ll be engaged in a foot race and a contest for possession of the ball. This means that technique will play a role in this drill in addition to speed. Players will need to move explosively toward the ball, but on the approach, the chest will need to come down, and the body will need to align in a way that allows the player to protect the ball upon pick-up.

Players need to work hard to avoid a reckless run-and-scoop motion, and instead will need to focus on a controlled approach, a deliberate pick-up, and a fast getaway with the ball carefully secured. This final motion will require not just a low chest, but also power in the front stride and careful placement of the stick, so both the leg and the stick are positioned to protect the ball from the opposing player. Watch the video carefully to observe how the player blocks his opponent’s access to the ball using his leg, stick, and upper body. After the ball is claimed, players can jog back to the starting point and get ready for the next round of the drill.

In order for any speed training exercise to bring results, players need to take clearly defined rest period between each round of a sprinting drill. If this lacrosse workout is taking place with a large group, rest periods will come naturally as players wait for their next turn. But if lacrosse players are executing this drill alone or with a single partner, they’ll need to rest for at least a minute or a minute and a half between each round. Players can determine if their rest breaks are long enough by making sure that they bring their full speed and full energy to each rep. Any fatigue or slow movement during the drill means longer rest periods are necessary.

With the Kbands in place around the upper legs, players should complete four reps of this drill beginning on the right side of the double line of cones. After four reps, players should start over and complete four more beginning on the left side of the double line. This will help develop a balanced stride on both sides of the body. After four reps on each side (eight total), players can remove the Kbands resistance bands from the straps and complete two more reps on each side with the legs moving freely.

During the uresisted reps, lacrosse players may be tempted to invest less energy in the sprinting motion and allow the temporary neurological sensation of lightness to substitute for real speed. But instead of dialing back, players should actually push even harder during these final two reps that they did during the first resisted round. Players should still concentrate on driving the body toward the ball and maintaining perfect technique during the pick-up.

For more lacrosse speed and agility drills like this one, and for more drills that emphasize lacrosse technique on both offense and defense, players and coaches can explore the lacrosse training section of KbandsTraining.com. In the meantime, the site also offers diverse training drills for a wide range of sports, including baseball, basketball, cheer, track, and football.

Each of these sports can benefit from the resistance and suspension training benefits of the Kbands, KB Powerbands, and KB Duo. Purchasing information is available on the Kbands website, where users can also find training and demonstration videos that show how this equipment can be used to build strength, agility, and speed.