Known as the lacrosse Cage Defense Drill, this exercise is simple in its execution, but it’s also very challenging to the defensive player’s reflexes and agility, and it targets the muscle groups that contribute to speed and core strength. Without the Kbands, the drill is still valuable, but with the bands in place, an extra tension is applied to the hip flexors and quads, and this tension causes the muscles to fire and takes overall speed and strength to the next level. Players will be able to feel the difference as soon as the bands are taken off, and the long term results of this drill can have a dramatic impact during game situations.

The lacrosse Cage Defense Drill requires very little equipment and is easy to set up and execute at any point during a regular practice session. This move can be worked into a seasonal training program a few times a week for noticeable improvements on the field.

This drill requires only a goal, two speed and agility cones, and a set of lacrosse equipment for each player, including a stick and a pair of Kbands. One cone will be placed on either side of the goal just beyond the edges of the crease, and the bands can be strapped around the legs after a warm up session. Players can also simply move into this drill from a previous exercise involving the bands.

Since players will move back and forth behind the cage individually, this drill is difficult to execute with an entire team at once, so it may be beneficial to work this move into a circuit training session. (For more circuit exercises, visit the lacrosse training section of KbandsTraining.com.)

One at a time, each player will take a position at the starting cone on either side of the crease. At the starting signal, the athlete will race to the other side as if preparing to meet an offensive player who is approaching the cage from X. When the player arrives at the opposite cone on each side, the stick should be raised and prepared for defensive maneuvering, and the player should be prepared as well. The eyes should be up and the attention should be focused in the direction of the oncoming athlete.

Along the way back and forth between the cones, the athlete will jump over the end of the net, leading with the front leg instead of crossing over. The jumping motion will cause the muscles to fire in the quads and hip flexors, and if the player stays in rapid motion back and forth behind the net, this tension will also build endurance by elevating the heart rate. 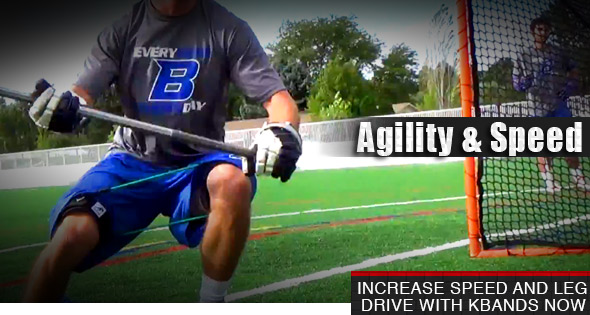 When the offensive player moves up from X and approaches the GLE, he may engage in sudden direction changes, and the defensive player in the crease will need to shift focus quickly in order to respond. This drill helps defensive athletes stay engaged with the opponents intentions, which requires not only a strong core, but also fast footwork.

If the defensive player’s weight stays balanced and centered over the inside leg at each end of the drill, he’ll be able to shift direction quickly and anticipate the moves of the opponent. Even if the defender is one step behind the offensive player, he has room to cut through the crease and catch up. But this will require balance, coordination, and above all, agility.

The best way to execute this drill is by emphasizing time rather than reps. Each player should move back and forth from one cone to the next for about 12 to 15 seconds, working the inside leg and allowing the large muscle groups to work to their full explosive capacity. The player should stay in continuous motion, driving the knee and working the feet back and forth over the end of the net until the end of each round. The 15 second sprint should be followed by a rest period of about a minute to a minute and a half.

At the end of six resisted sets, two rounds of unresisted sets will be enough to finish the drill. These last sets will allow athletes to feel the neurological sense of lightness that takes place after the bands are removed, and this temporary sensation can add noticeable speed and agility to the execution of the drill.

After completing this simple but powerful agility sequence, teams can move on to the next stage in a progressive series of lacrosse drills. Visit the lacrosse training section of the Kbands Training.com website to find the GLE attack drill, or the drop step defense drill. Both of these can capitalize on the momentum of the cage defense drill and help players continue to build speed, agility and technique while conducting offensive and defensive maneuvering around the cage.

The lacrosse training section also offers a wide and growing range of video drills covering every aspect of the game, including stick handling skills, passing, scoring, and offensive and defensive strategy.