By utilizing youth pitching drills which focus on both strength and explosiveness athletes will be able to combine these two throwing attributes for higher velocity pitches and throws. Some of the best pitching drills to practice are those which train the entire body while simulating game like movements.

Pitching Drills For Building Strength Off The Mound

The Power Position Sliders is a great pitching drill which uses game like movements to help athletes maintain better body control, strength, and explosiveness when pitching off the mound.

Athletes will begin the pitching drill by standing at one Speed and Agility Cone, raise their inside foot and balance on the outside foot (athlete lined up on left side raise right foot, balance on left foot). From this single leg position athletes will slightly bend the knee and explosively jump laterally toward the opposite Speed and Agility Cone. Athletes should try to keep a good body position by not allowing the hips, shoulders, or chest to rotate at any point during the jump or landing. Athletes should also not allow the chest to lean forward during the pitching drill. Athletes will land the jump on the opposite leg they jumped with, balancing on the landing leg while raising the opposite knee in a pitching motion. Athletes will then balance on their outside leg (same leg which they landed on) and explosively jumping back toward the original Speed and Agility Cone. 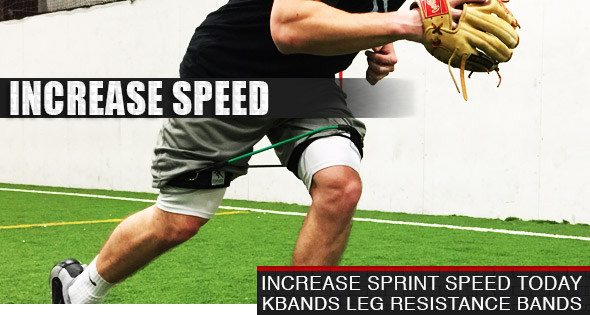 Baseball players place a tremendous amount of stress on their arms and the ligaments which control how the arms and shoulders move. By practicing pitching drills which focus on developing and loosening these muscles athletes will be taking a step to avoid costly injuries. By adding core work into the pitching drill athletes will further protect their bodies by building a strong base at the center of their body.

Both partners will begin in a standing position, facing forward so athletes are side to side, each with one end of the KB Powerbands. The athlete performing the shoulder prevention exercises will put their hand or a towel high in their armpit, bring their elbow to their side, and make a 90 degree angle at the elbow. Holding the KB Powerbands athletes will maintain this position with their arm and begin to rotate just the bottom portion of their arm (forearm and hand) away from their body. It is important athletes do not let their elbow move away from their body. Keeping the elbow tight will allow athletes to experience the full benefits of the pitching drill. Athletes will move the hand away from their body at a normal speed while taking 4-5 seconds to control the resistance as the hand moves back toward the body.

While this partner is rotating their arm in and out the other athlete will hold the KB Powerbands with both hands extended out in front of their body. With knees slightly bent, back straight, and shoulder blades pinched together this athlete will squeeze their abs and hold this position. As their partner rotates the athlete will feel tension build in the abs. Athletes must keep abs tight to avoid being pulled or rotating the hips or arms.

For the second phase of this shoulder prevention pitching drill one athlete will continue facing forward while the opposite athlete turns to face their partner. Athlete facing their partner will be performing the should prevention portion of this phase of the pitching drill while partner the facing forward will be focused on strengthening their core.

The athlete facing their partner will hold the KB Powerbands handle in one hand and raise their arm so their elbow is even with their shoulder and there is a 90 degree angle at the elbow. Athletes will move so there is tension on the resistance band and slowly rotate their hand forward, keeping the elbow and upper arm stationery. Athletes will perform a controlled motion for 4-5 seconds on the downward motion while maintaining a normal speed while returning to the starting position.

During this portion of the youth pitching drill partners still facing forward will hold the KB Powerbands handle straight out in front of their chests with both hands. Athletes should maintain a stable position during this portion, squeezing the abs as their partner rotates their arm.

In the final phase of this preventative pitching drill the athletes will both face forward. The athlete performing the shoulder portion of the pitching drill will place the KB Powerbands in their outside hand as they laterally lunge and extend their arm away from their body. During this motion it is important athletes use a controlled motion while keeping the arm extended and moving in a straight line. Athletes need to maintain greater control and a slower pace as they bring the hand back toward the body in a controlled motion.

The partner performing the abdominal portion of the pitching drill will sit down on the ground while holding the KB Powerbands straight out in front of their body. A slight lean back should be utilized to increase muscle activation in the abdominal region.

For all three variations of the preventative youth pitching drills athletes will perform 2-3 sets of 8-10 repetitions per arm. Athletes need to rotate through this pitching drill with their partners moving from the shoulder portion into the abdominal portion. Rotating positions will act as the rest period for the athletes which is why rotating after every set is important to keep athletes arms and abs fresh for the next set of pitching exercises. This pitching drill is a great way to get athletes shoulders and core warmed up before a game or training session and should be utilized before athletic activity is performed.

Build Power And Explosiveness With This Youth Pitching Drill

As we stated earlier simply having strength will not help athletes become a great baseball player. It takes a strong combination of speed and strength to produce great power and velocity on pitches. This is one of the best pitching drills for athletes to train their bodies to be more powerful and explosive.

For these explosive youth pitching drills athletes will need a set of Kbands attached just above their knees. Athletes will move through two phases of this youth pitching drill, tuck jumps and split jumps. This unique combination of exercises allows athletes to focus on building baseball power in both legs while also isolating the legs and forcing them to individually develop these power characteristics.

To perform tuck jumps athletes will jump as high as they can in the air, while airborne athletes will tuck their knees into their chest. These jumps should be performed consecutively jumping, landing and immediately jumping back into the air and tucking the knees. Athletes cannot allow the resistance to alter their body positioning and need to maintain good spacing between the knees so the knees, hips, and ankles are all aligned. Athletes will perform 8-12 resisted tuck jumps for 3-4 sets before removing the Kbands and performing 2-3 unresisted sets of 8-12 repetitions.

Following the tuck jumps athletes will continue the youth pitching drill by performing alternating split jumps. Athletes will begin in a lunging position with one foot out in front of the other while maintaining a high chest. Athletes front leg should stay at around a 90 degree angle throughout the explosive pitching drill. From this starting position athletes will use an explosive upward arm action to help them explosively jump in the air and switch feet, athletes should land with the opposite foot forward. Continue this jumping and switching process for 3-4 resisted sets of 8-12 repetitions followed by 2-3 unresisted set of 8-12 reps.