One of the biggest "game changers" in baseball is a team's ability to steal second base. Having a man on first base that has the capability of stealing second base is vital to any good baseball team. Stealing is a great weapon to the offensive side of the game. Stealing second not only puts a runner in scoring position but it also builds team momentum and often starts a rally. Just because a runner is fast does not mean that he is good at stealing bases. Having great speed is an asset for a baseball player, but having the ability to analyze a situation, having the correct movements and footwork plays a vital role in helping a baseball player get to the next level. Getting a good primary and secondary lead is something a baseball player must have in order to steal a base. That first step to take off running is crucial. Great footwork is the difference in whether or not a runner is safe at second, gets picked off, or is able to dive back to first in time. A baseball player’s first movement is to gain ground and any wasted movement could get him thrown out.

Ricky Henderson, the “man of steal”, is known as the best base runner and leadoff hitter of all time. He holds the all time record for stolen bases and the record for the most stolen bases in a single season. Ricky had an amazing 1,406 total stolen bases in the Major Leagues. His list of records goes on and on. Henderson believed that balance and hip strength were key to stealing bases. Henderson stated, “In baseball you train the whole body, it’s not just speed but the ability to concentrate on pitchers, how to get a good jump and explode out of the jump.”  He also stressed for baseball players to go out and create runs by stealing instead of waiting for the one big hit. He believed that a baseball player who has the ability to steal bases helps win games. Creating runs requires the ability to steal bases.

This drill helps baseball players work to increase speed while improving first step footwork. Put lower Kbands on and set up two cones about 12-15 yards apart. One of the cones is first base and the other cone is second base. Baseball players do not need to run the entire base distance for this exercise because of training with Kbands. The goal is to stimulate the first movement and explode out of the hole. Begin with a three-step slide step off first base while focusing on the pitcher and maintaining balance. Take the left leg over the right with a pivot and push off with the front foot. Stay low for the first 4-5 steps and then rise to a regular running position. This will help increase speed to second if running as hard as possible. Complete 6-8 reps of this drill with resistance. Immediately after these 6-8 resisted reps move right into an additional 4-6 un-resisted reps

The baseball player only has a small window or time when taking the Kbands off to get in a quick 4-6 reps which is the time to start really developing speed. Take the Kbands off and use the feather like feeling in the muscles due recruitment gathered throughout the hips and thighs from the resisted sprints and really get out and run. Once again, take a 3-step lead off, take the left leg over the right with a pivot and push off with the front foot. Stay low for the first 4-5 steps and then rise to a regular running position. This will help increase speed to second if running as hard as possible. Run 4-6 reps at full capacity. Staying balanced in the middle is so important when stealing second base. Even though the right foot is back just a little in order to open up the hips and go, the runner must remain balanced in order to get back to first base. If the pitcher makes a move toward first base the runner can still get back. One key for a pitcher to pick off a runner on first base is when a runner is sitting over his right leg and his weight is not balanced. The pitcher knows the runner will have a hard time getting back to first quickly. Even when a runner knows he is going to steal he needs to keep balanced until ready to make his jump to take off and go. 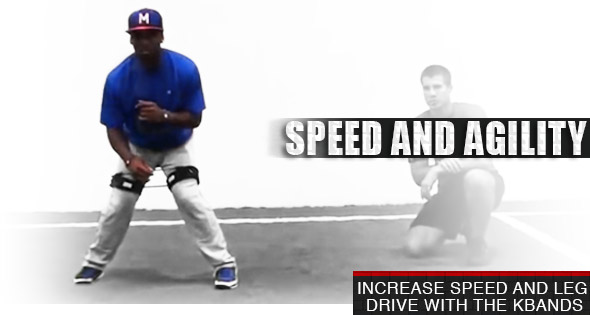 Tips to Steal Second Base

The Leadoff:  There is no reason to work hard to get on first base and then turn around and unnecessarily get picked off or thrown out at second. Begin by getting the sign from the coach and remain on first base until the pitcher is on the rubber. Stay in the athletic position and keep an eye on the pitcher. As soon as the pitcher is on the rubber with the ball, take a big step with the left foot where the tip of the shoe turns toward home plate and then step with the right foot. Stepping with the left foot first will cause the feet to get crossed or tangled up. Stay in athletic position with the arms relaxed and shuffle 2-3 steps. Advanced players will extend the lead to 3-4 steps. Remember to never rest elbows on knees. A base stealer wants his arms to be relaxed and ready to drive the body when he begins his takeoff. Staying balanced is important because if weight is to the right then it will be hard to dive back to first, and if weight is to the left then going from the leadoff into the jump to second will be difficult. Imbalance increases the chances of being thrown out or picked off. An important thing to remember is to have the feet a jab step apart in order to easily move to the right or to the left. If the pitcher attempts a pick off then the runner can easily take one jab step left with the right hand going to the back right corner of the bag. This allows the runner to easily see if there is an overthrow so he can quickly get to his feet and take off for second base.

The Jump:  The runner already has a great lead and is ready to steal second base. The feet are already apart and the arms are relaxed and ready to drive the body. During the takeoff the weight shifts toward the outside of the right foot and the first step is with the left foot in order to gain ground toward second. The left arm pulls through the body to push the body through. Then the feet will do what is natural to the runner when the shoulders and hips begin rotating to the right. Strength and conditioning with Kbands prepares the legs to be explosive during the jump and drive to second base when stealing. The shoulders and hips must rotate toward second base as quickly as possible to get the entire body in position to take off running. Arms must stay at a 90° angle working forward with no wasted movements from side to side. Arms should also not go above eye level. Often a base runner has the tendency to raise the shoulders and hips or lower them but it is key to stay in the athletic position as the left arm quickly drives across the body towards second base. If the shoulders and hips are raised or lowered they will not be in position to rotate and explode. Any hesitation can cause an unnecessary out. The center of gravity to dig in and to accelerate is set up during the leadoff so that during the jump a base runner is ready to rotate and go.

A base runner must also remember to continue watching the pitcher until taking off. The heels of the pitcher are the key. Heel movement of the pitcher will tell the runner whether the pitcher is throwing home or attempting a pick off.

Kbands can help increase speed by strengthening hip flexors, glutes, and improving hip stability. Baseball players can feel immediate benefit when taking off Kbands. The muscles recruited during the use of Kbands will improve baseball player's ability to run faster. Kbands allow infielders, outfielders, catchers and pitchers to improve their strength and hip stability while training in the exact same fashion their sport requires. Building strength in the weight room is one thing, but building strength to explode in sport specific movements is key. The best way to train with Kbands, is to complete resisted reps followed immediately by un-resisted reps. In doing this, baseball players will feel a featherlike feeling in their legs. This portion of the workout is when an athlete must make sure to work at 100% intensity. This will ensure the baseball player will use all of the muscles recruited to train the body to work at maximal effort with all available muscles. The human body is made to adapt. Not all muscles fire at once to complete any specific movement, but by increasing the amount of resistance needed to complete a task, baseball players can train their bodies to perform at peak potential.

First, complete 6 to 8 resisted reps for time. After the 6-8 resisted reps, baseball players will immediately unclip the resistance bands and move directly into 4 to 6 additional un-resisted reps. Push the pace, and always work at maximal effort. Resistance helps muscle recruitment and improve muscle abilities. Work at 100% intensity to increase speed and become a better baseball player. If looking for full Speed and Agility Package then look to our Athlete Performace Pack for a set of Kbands and our full athlete training program. Build your core, speed, and agility with our full workout athlete training session.