How to Throw a Baseball: Kbands Throwing Progression Drill

How to Throw a Baseball: Kbands Throwing Progression Drill

In this video, baseball coach Matt Johnson takes viewers through a series of drills that can help baseball players learn how to throw a baseball with greater velocity and control. Baseball players, especially young athletes, tend to develop problems with pitching mechanics that are easy to resolve if caught and corrected early, but more damaging if they have a chance to become ingrained. A set of pitching and throwing drills like these can help iron out some of these problems before they take hold.

How to Throw a Baseball: The Five-Step Progression

This pitching drill can be executed by one player alone, by two partners, or in a group or team setting. Regardless of the structure, players should all have access to a watchful, experienced coach who can provide guidance during each stage of the drill. Players will need a bucket a balls and enough open space to throw a ball up to about 60 feet.

The progression of this drill moves backward through each stage of the throwing process, so the first stage will involve the final release of the ball before it’s sent out toward the catcher. At this stage of the throw, younger athletes have a tendency to allow the elbow to “leak” out, or open at the shoulder, and this stage will counter that impulse. Players should point the elbow forward with the arm bent at 90 degrees, and bend from the elbow and wrist in order to throw the ball hard. The key pointers for this stage are as follows:

1. The elbow starts and ends at a 90 degree angle.
2. The upper arm stays parallel to the body from the shoulder down.
3. The wrist snaps at the end of the move as the ball is released.

As the throw is released:

This stage should involve five to ten reps, and poor reps should not contribute to the total. Younger athletes should complete more reps, making sure the arms stays parallel and the wrist snaps at each throw.

The second stage of the throwing drill involves casting, a portion of the throw that tends to cause problems for younger athletes who need to develop greater control over the angle of the arm and shoulder. During the casting phase of the throw:

This drill should focus entirely on arm motion, which means there should be no rotation in the hips or upper body. The torso should stay flat and perpendicular while the arm releases the ball as if the player is casting a fishing line into the water. Sets and reps for this stage of the drill are as follows:

1. 10 to 15 sets, which can vary based on the experience level of the athlete.
2. While throwing, the athlete should focus on the sequence, and combine the mechanics of the first and second stage. 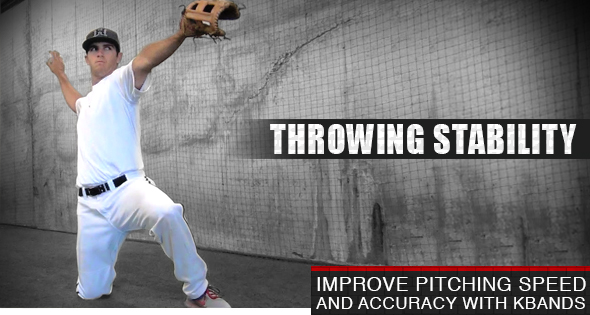 The third stage of this pitching drill will eliminate the lower body from the motion of the throw and allow the baseball player to focus on the arm and upper body alone. To begin the drill the player will place his weight on the knee opposite to his glove hand. As he rests on the ground, the player will maintain a straight, square posture with the hands in front of the line of the body.

As the throw begins, the shoulder on the glove side will come all the way forward, both hands will push down toward the ground on the throwing side with the thumbs curved in big C’s, and the throwing arm will rise up in a wide arc behind the line of the body. As the throwing arm moves forward, the glove hand will tuck and pull back, and at the point where the throwing arm crosses the body line, the player will begin to move into the second and first stages of the drill described above. The drill should finish with the glove tucked and the chest over the knee.

The fourth stage starts with the following fundamentals:

1. The feet will be shoulder width apart
2. The shoulders will be square toward the target
3. The truck will rotate
4. The wrist will snap on the release

As the drill begins, the throwing shoulder will come forward and the glove shoulder will move directly back, the shoulders will reverse position as the hips rotate, and the throwing arm will rise. The player will then notice this stage giving way to stage three, then two, then one. After the ball is released, this stage will end with the chest and throwing arm down low over the opposite knee. Stage four should involve five quality reps.

Stage five of the drill will finally combine all the stages described above, with the addition of an explosive lower body. Instead of squared shoulders facing the target, this drill will begin with a complete rotation, with the foot and the shoulder on the non-throwing side pointing directly toward the target. Before the throw, the back leg will bend and the body will rock backward. As the throw moves through each of the stages described above, the lower body will be involved, the weight will shift, and the leg on the throwing side will rise up from the ground.

From this point forward, the every part of the body will be involved in the throwing motion. Players can complete five quality reps of this drill, which will take them from the final stage, through the fourth, then the third, second, and first, when the wrist snaps to release the ball and the body continues to follow through.

For more baseball fundamentals and drills like these, and for more information about targeted suspension and resistance training equipment, visit baseball section located under the training tab above.