An advanced, fast-paced lacrosse game demands intense commitment from players on several levels. At the same time, any given athlete on the field will need strong mental focus, hand eye coordination, and intense recruitment from major muscle groups, including the arms, lower body, and core. Drills like the Kbands Lacrosse 4x2 Ladder Sequence attack all of these challenges at once, and can drive players to elevate multiple skill sets at the same time. Working this drill into a regular practice session can help teams build agility, speed, and footwork, while also practicing cradling and stick handling skills.

This drill is easy to set up and takes only a few minutes to execute, since multiple players can move through the series at the same time. Teams will need to warm up, stretch, and attach the Kbands resistance training bands around the upper legs before attacking the four different exercises that make up the drill. After the drill is complete, the added resistance and muscle recruitment activated by the bands will provide a sense of lightness and speed that can influence the remainder of any complete practice session.

This drill will require a Speed and Agility Ladder for each group of participants. One ladder will work, but using multiple ladders at the same time will allow  teams to complete the drill faster and spend less time waiting for access. (Speed and agility ladders, like the Kbands training bands, can be purchased through the KbandsTraining.com.)

Each participant should also have a set of Kbands in place, and should also have a full set of lacrosse equipment. Advanced players can also carry a ball during the drill in order to work on cradling and coordination while building speed and agility.

At the starting signal, lacrosse players will begin moving down the ladder at high speed using each of four different footwork patterns. These four exercises will each be completed in four sets with the bands in place.

The first exercise—the high knee—will be a simple and straightforward sprint down the ladder with the knees driving high at every step. With the stick held high and close to the body, the athlete will touch down with both feet in each square. Athletes should use the upper body to stay balanced, leaning slightly forward and keeping the eyes up and focused at all times. The knees should drive up at each step, pulling against the resistance of the bands, and the athlete should stay in rapid motion from the beginning of the sequence to the end.

The second exercise in the sequence is called the lateral high knee. As with the first move, athletes will begin at one end of the ladder with the stick held in one or both hands. At the start, each athlete will move down the ladder in a lateral orientation, touching down with both feet in each square. the feet should not touch or tangle in the ladder, and to prevent this, the knees will need to drive up at each step.

As with the first exercise, the eyes should stay up and focused and the upper body should stay balanced and centered all the way down the line. At this point, players should begin to feel strong engagement in the muscles of the core and lower body as the hip flexors work against the resistance of the bands. 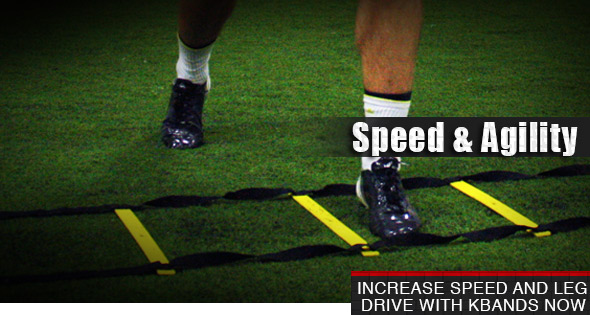 The third move in the sequence will be the Icky shuffle, and during this exercise, players will manipulate the stick from hand to hand as they move down the ladder. Facing forward down the line, each player will hop in and out of the ladder from left to right, touching down with both feet in each square. At each square, the stick will shift from one hand to the other. As with the other exercises, players will need to concentrate on stick control, knee drive, speed, and balance.

The final move in the sequence will be a backward facing Icky shuffle. Players will face away from the direction of motion while moving in a shuffle pattern from left to right. Athletes should focus on balance during this sequence, keeping the chest just as wide and forward-leaning as in the forward moving versions. And of course, the speed of the footwork and height of the knees at each step will also contribute to the value of the drill by driving muscle recruitment in the legs and core.

This drill provides a great way for players to engage the body and the mind at the beginning of any intense training session, and if athletes work hard to drive the knees against the bands throughout the entire drill, the neurological sensation of lightness will last for some time into the rest of the training session and will contribute to speed, agility and balance.

Players should complete four sets of each exercise, down and back. At the end of four sets with the Kbands in place, the resistance bands can be unclipped from the straps and players can complete two more sets of the entire drill with no tension in place, down the agility ladder and back again.

For more adult and youth lacrosse drills similar to this one, players and coaches can visit the lacrosse training section of KbandsTraining.com. The site offers a growing list of videos and tutorials that help both advanced and beginning lacrosse teams develop speed, passing and scoring skill, agility, offensive and defense strategy, teamwork, rhythm, endurance, and a long list of other strengths and skill areas that can provide a critical competitive edge on the field.