As basketball players navigate past defenders and approach the hoop for a lay-up, their success will depend on foot speed and agility in the lane. And of course, they’ll also need to shift gears and stay focused as they move from the approach to the final delivery of the ball. Basketball agility drills, specifically ladder drills like the one demonstrated in this video, can help players improve their agility on the approach. And they can also develop the coordination and control necessary to change direction and focus on successful scoring.

These basketball agility drills can support skill development and scoring ability for players of all ages and all levels, and they require very little time and equipment. Basketball coaches and players can start working these ladder drills into a regular in-season or pre-season workout program and watch the resulting team improvements in coordination, balance, and agility.

This set of ladder drills will require only a ball, a hoop, a speed and agility ladder, and a set of Kbands resistance training bands for each player. While the players attach the Kbands straps to their upper legs and clip the resistance bands to the straps, coaches can lay the agility ladder along the ground to the left or right side of the net, depending on the stronger lay-up side for each player. Every member of the team should make an effort to build strength on his or her weaker side and follow a balanced approach to lay-up skill targeting both the left and the right. Coaches should leave a four foot gap between the backboard and the end of the agility ladder.

Before focusing on the lay-up portion of the drill, players and coaches should use the ladder and Kbands to emphasize hip and core strength with footwork along the floor. Players can move one by one down the ladder at high speed, using three different footwork styles: the high-knee, the icky shuffle, and the in- out drill. Each of these are described below.

1. The High Knee: Players will sprint down the agility ladder placing one foot in the square between each rung. At each step, the knees will rise all the way up to a 90 degree angle. This will strengthen the hamstrings and quads as the legs work against the resistance of the bands.

2. The Icky Shuffle: Players will begin with both feet on the left side of the ladder. The right foot will step into the first gap, followed by the left. Then the right foot will move to the outside of the ladder on the right side, followed by the left. The same move will be repeated at the second rung, starting with the left foot. This move can help with dynamic footwork during offensive and defensive maneuvering.

3. The In-Out Drill: This drill will target the abductor and abductor muscles as well as the hip flexors. Players will move down the line one rung at a time, bringing both feet inside the ladder and then out at each rung. 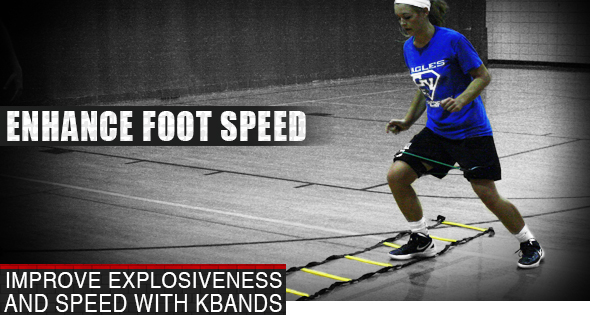 As players reach the end of the agility ladder during each round of drills, a coach or partner will bounce the ball off the backboard. The player will retrieve the rebound, then go for the lay-up at the next beat. During the lay-up, coaches can offer tips and guidance to correct errors and improve accuracy. Players should concentrate on jumping as high as possible and controlling the delivery of the ball into the net at each shot.

While the ladder portion of the drill will emphasize footwork as well as strength and conditioning in the hip flexors, glutes, quads and core, the lay-up portion of the drill will emphasize coordination and scoring accuracy. Players should move through each set of ladder drills and lay-ups four to six times on each side of the net, scoring with both the left hand and the right. These first four to six sets should be executed with the Kbands in place.

As each player wraps up the resisted sets, she can remove the Kbands from the straps and then repeat the drill two more times on each side with no resistance. The entire sequence should be repeated from beginning to end twice on each side, with a rest period of about a minute between each set.

For the first few minutes after the Kband straps are removed, players will experience a neurological sensation of extreme lightness. They can use this sensation to their advantage by adding speed to the ladder portion of the drill and height to each repetition of the lay-up. Players should stay straight and focus on height as they receive the rebound and take the lay-up shot at the end of each agility rep.

For more drills like this one, players and coaches can visit the basketball section of Kbands Training.com. Many of the basketball drills and training suggestions on the site emphasize multiple skill areas at once, including offensive maneuvers, defensive strategy, footwork, passing drills and conditioning. Both offense and defensive games require teams to keep their communication channels open and their reflexes sharp, just as they require strength and coordination in the feet, hips, and core.

As always, coaches should keep a close eye on players as they develop these skills, so they can correct technique the moment issues arise. And the use of Kbands resistance training equipment can also support any team’s training goals, from passing accuracy to speed during full court linear sprints. Visit the site to learn more about the benefits of the Kbands the KB Powerbands. The light weight, portable KB Duo also provides a complete strength training workout using suspension and gravity to help players build balance and condition.